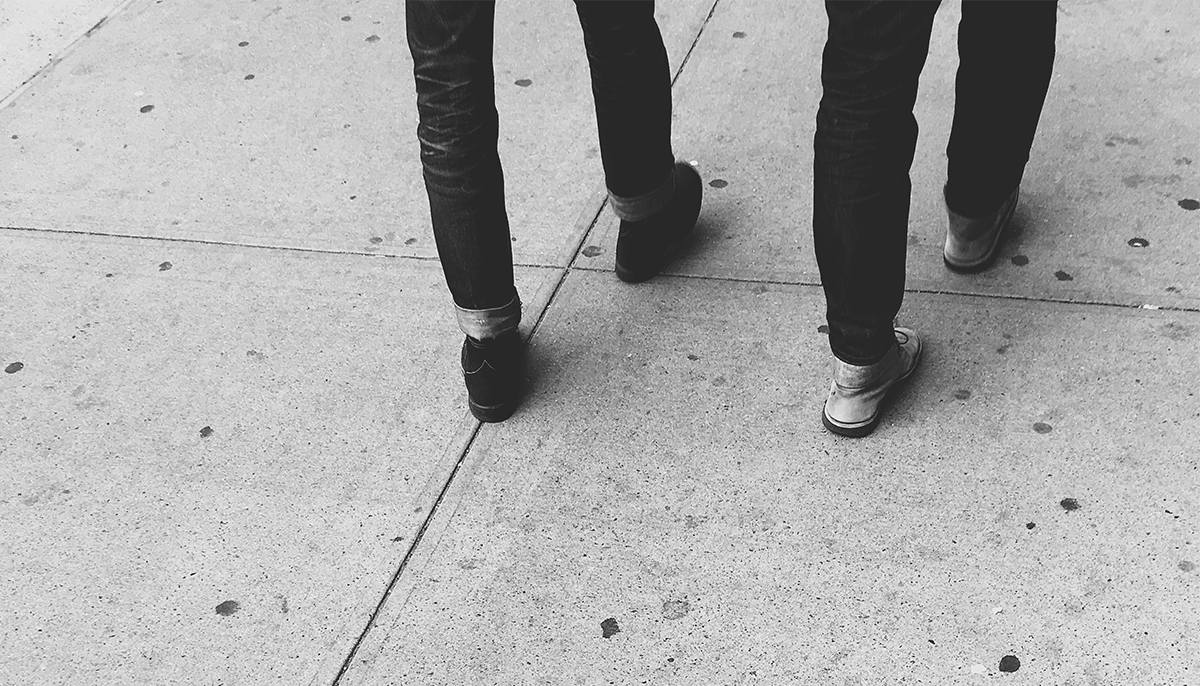 Every day we get up at six in the morning and pack. Then we do sitting meditation and a Buddhist service. We also chant a Verse of Atonement:

“All evil karma ever committed by me since of old
On account of my beginningless greed, anger and ignorance
Born of my body, mouth and consciousness
Now I atone for it all.”

If breakfast is available we eat, and then we prepare sandwiches for lunch, if those are available, too. We start walking no later than nine and keep on walking until our lunch break at one-thirty, when we have a rest for about thirty minutes. Then we continue walking till we reach the next town. It’s important not to arrive too late, so that there is still time to approach the local churches and ask them for help, a place to stay and some food to eat.

My name is Petra Schaumburg. I’m 32 years old and a German citizen. I’ve been practicing Zen Buddhism for two years, and a year ago I met Claude AnShin Thomas, a Zen Peacemaker Priest from Concord, Massachusetts. Claude founded the Zaltho Foundation to promote peace and non-violence, and he travels around the world giving public talks and leading mindfulness retreats.

Last year, at a retreat in Germany, he talked about a pilgrimage across the United States and invited us to join him. We would have to walk fifteen to twenty miles a day, carry everything we needed in a backpack (no support vehicle), and bring no money.

I was not certain, so I did a street retreat with Claude in Berlin last October. Then, too, we took nothing with us: no money, food or blankets. We lived for five days on the streets, begging for everything we needed. Even basic things like taking a shower or brushing my teeth weren’t possible for this period of time. Living on the streets brought me deeply in contact with my basic fears, my dependence on safety, my greed for material things, and my attachment to comfort. It was five days of letting go, dealing only with what I have and what I am, with no possibility to pretend or to hide. After those five days I decided to do the pilgrimage across America.

My decision to walk for more than seven months in a foreign country required some preparation, quitting my job, giving up my home, storing all my possessions, and learning to ask for dana, the Buddhist term for selfless giving. I had to ask many people for their support, both monetary and non-monetary, and each time I asked I had to explain what I was doing from scratch, putting my motivations to the test again and again.

As I write this we are now in northern Kansas. We are a group of nine people, two American Vietnam veterans, six Germans and one Swiss, walking across the North American continent from Yonkers, New York to Albany, California. We walk to raise awareness among the people we meet and to pierce the cloak of mystery that surrounds Buddhism in many areas of this country. We walk to encourage dialogue between the faiths and to point out how much more sense lies in discovering the similarities among the various religions, rather than always worrying about the differences. Respect and tolerance practiced in a sincere way will eventually lead to peace, and if we want things to change, we have to start within ourselves.

In Nazareth, a town in eastern Pennsylvania, the secretary in the first church we approached gave us a list of telephone numbers for all the other churches in town. One of the ministers we talked to said, “There is no way we will allow you to stay in our church.” But a Catholic priest named Father Webber invited us to come and meet with him in person. Sitting in his office, he expressed his doubts and fears about letting us stay in his church, but being a man who “walks the talk,” he felt a strong obligation to help because that’s what his faith is about.

Eventually, after checking our ID’s, he agreed to provide us with a place to stay for two days. During those days we talked with him several times. We attended services where we were introduced to the community and had the chance to speak with the people afterwards. The priest did our laundry and went with us to get food. He also helped us to find a place to stay the following night. On Easter he came to visit us on the road.

Our encounters usually follow a pattern: after the first doubts and suspicions, people start opening up to us. We’ve participated in meetings at a Quaker Meeting House and spoken at a Quaker school. We’ve held ecumenical dialogues with churches from different Christian traditions in every state we’ve been in.

Of course, we have not always been successful. In Clearfield, Pennsylvania, we approached all of the churches in town, as well as the Salvation Army. None was willing to put us up for the night. A big reason was that we are a Buddhist group; a second was that we are mixed (men and women). All the people we met there were very friendly and helpful, trying to find a place for us to stay, anywhere but within their own four walls. We finally ended up sleeping in a pig barn on a fairground in the pouring rain and, eventually, snow. One of the churches that turned us down invited us the next morning for breakfast. After a freezing night in a pig barn, I was very grateful to have a warm drink and a bite to eat.

In Ohio, only four churches in the entire state gave us hospitality, but the people were wonderful. In Poland, Ohio, we met two women out for their evening walk. We asked them for directions to a church. Instead they took us home, cooked for us and introduced us to their neighbor, who practices Tibetan Buddhism. We spent two nights in that family’s home, were interviewed by a local newspaper, and met the Youngstown, Ohio, Buddhist sangha. Their 10-year-old daughter, Laura, had seen an omen of our coming: all the trees in their garden had started to blossom on the morning we arrived. Upon meeting us, she said happily to her dad, “I told you they were coming. I knew something special was going to happen.”

As we walked from Poland to Randolph, the police stopped us. An anxious onlooker had called them to check us out. Suddenly, police officers in three cruisers came to a stop and questioned us very aggressively. We explained to the officers in a clear and sincere way what we were doing, and they gave us rides in their police cars to the next large town and helped us find a place for the night.

Claude Thomas says that one of the realities of healing is that we all have to step into the unknown. From the unknown, healing is possible. The greatest gift I’ve received on this challenging pilgrimage has been to be able to concentrate on my breath and be present in moments such as the ones we had with the policemen in Ohio. Dealing with their aggression by just being present and holding their fear, rather than responding in the same way, prevented the perpetuation of their suffering and ours, the first step towards peace. Moments like these, when we don’t know what will happen, are the moments when healing is possible. They are there at every encounter on this long walk across America.