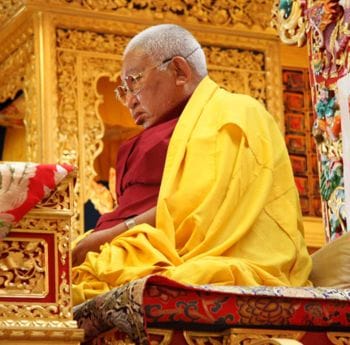 Taklung Tsetrul Rinpoche, who was appointed head of the Nyingma tradition of Buddhism in 2012, died in Bodhgaya, India, on December 23.

Born in 1926, in Central Tibet, he was ordained and recognized as a tulku at age 5, and trained in Tibet until 1959 when he fled the country. After making his way to India’s Rumtek Monastery, he continued his training, receiving teachings from His Holiness the Sixteenth Karmapa and Dilgo Khyentse Rinpoche.

He in turn would go on to offer dharma empowerments and teachings at, as he writes in his brief autobiography at RIGPA Wiki, “the direction of prominent lamas of different lineages at various monasteries in Bhutan, India and Nepal, including Namkhai Nyingpo Rinpoche in Bhutan, Kyabje Penor Rinpoche in Mysore, and Dilgo Khyentse Rinpoche at Shechen Monastery in Nepal. Otherwise, I continually give instructions, empowerments or transmissions on the preliminary and main practices, as are suited to the needs of whomever comes to request dharma teachings.”