Lilly Greenblatt talks to Buddhist teacher Konda Mason about her experience at The Gathering II, an assembly of Buddhist teachers and practitioners of Black African descent at Spirit Rock Meditation Center. 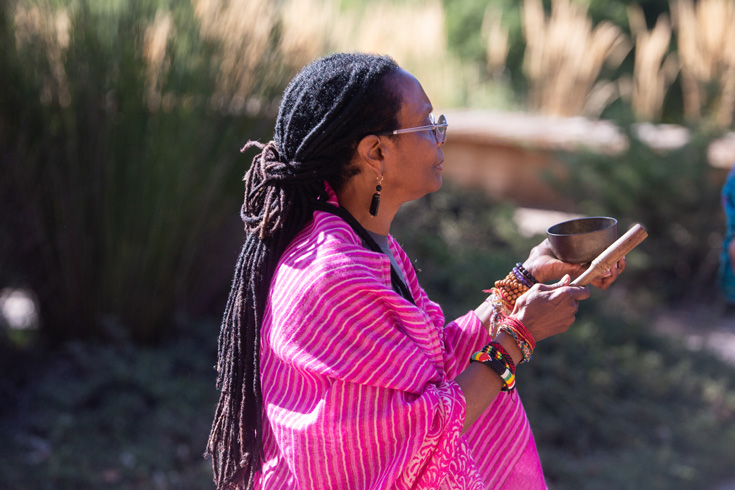 Konda Mason at The Gathering II. Photo by JJ Harris.

Buddhist teachers and practitioners of Black African descent came together at Spirit Rock Meditation Center in California for a two-day non-residential retreat, The Gathering II on October 12 and 13, 2019. Last year, Lion’s Roar helped co-host The Gathering at New York’s Union Theological Seminary, which saw 30 cross-lineage Buddhist teachers come together for a five-day meeting, followed by a public panel discussion. This year’s gathering at Spirit Rock held a much larger five-day private meeting of 70 cross-lineage Buddhist teachers, followed by a public weekend attended by 300 Black Buddhist practitioners.

The Gathering II was organized by Buddhist teachers Konda Mason, Noliwe Alexander, Myokei Caine-Barrett, and Rev. angel Kyodo williams. I spoke to one of the organizers, Konda Mason, about her potent and moving experience at The Gathering II, its history, and “the absolute beauty of Black people and the dharma coming together.”

Lilly Greenblatt: Could you tell me about the history of these conferences? In 2002, Spirit Rock held the first African American Dharma Retreat and Conference, and then last year Lion’s Roar helped to host the first rendition of The Gathering at Union Theological Seminary in New York. There’s been a number of retreats and sanghas organized for people of color in the years in between, and now you’ve just had The Gathering II at Spirit Rock. How did it all start?

Konda Mason: Yes, the first one that was at Spirit Rock 17 years ago. At the time, I was a yoga teacher at Spirit Rock. There was a group for African Americans led by a woman named Marlene Jones. For all of us Black folks in the Theravada, Marlene was really the person who brought us all in. She was an African American woman who lived in the Bay area. She was really the forerunner of fighting the good fight to try and bring deep diversity into these kinds of spaces, specifically Spirit Rock. Marlene died a few years back, but she was the force behind a lot of what we have now. At The Gathering II, we had a big picture of her on our altar and really honored her for her wisdom in the early days. 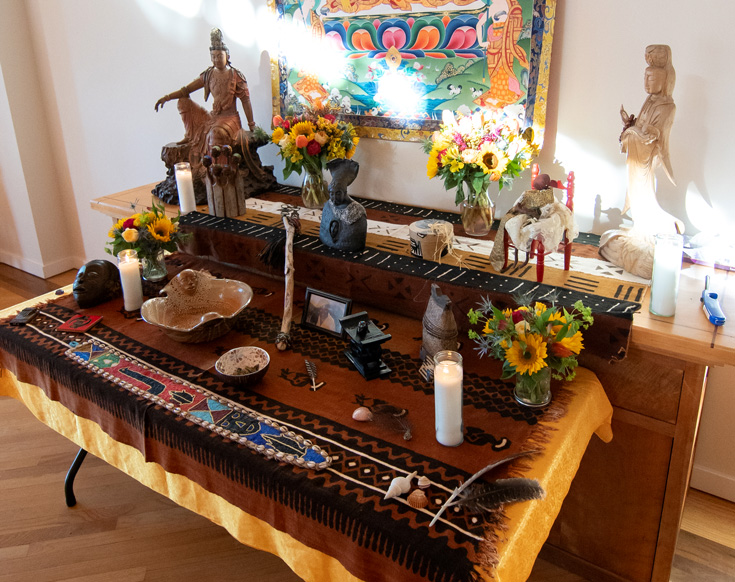 The altar at The Gathering II, featuring a photo of Marlene Jones. Photo by JJ Harris.

Ralph Steele was also there in the early days. He and Marlene managed to bring together the first conference at Spirit Rock. I was there teaching. It was just ridiculously good. It really showed us what was possible and who we are as Black people in the dharma together. People have been talking about it ever since saying we’ve got to do it again. It took 17 years to be ready to come back together again apparently, but I believe things happen in the way that they should and when they should.

At the first gathering in New York, 30 Buddhist teachers came together the week before the public event. This year there were 70 teachers alongside 300 participants. How does it feel to have such growth in the group?

It was crazy. It was amazing. Everybody was just completely blown away at the amount of interest and the amount people who came. We were at capacity.

Before the weekend for the community of Black Buddhist practitioners at Spirit Rock, you had a five-day meeting with just the 70 teachers. Can you tell me what was discussed in that time?

How do you describe the absolute beauty of Blackness?

One of the primary goals was to just get to know each other, to find out who’s where, and to be able to continue the conversation and continue supporting each other. The group was cross lineage, so we did a lot of learning about each other’s lineage. The other primary goal was to share, and look at how we can best show up in our communities as Black Buddhist teachers. Looking at the dharma, looking at the dharma communities, looking at the institutions that hold the communities, and how things are for us in the dharma itself. There was a whole spectrum of pain points to celebration. 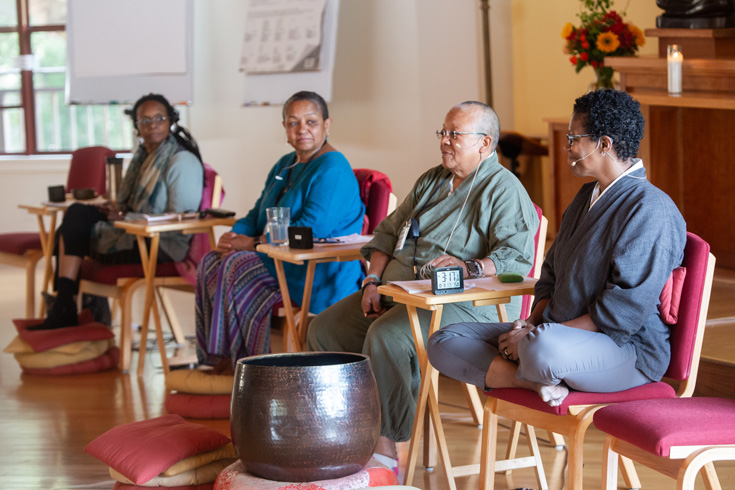 We really deeply dove into each of our own communities because they’re very different depending on the location, lineage, and the history of the lineage. Everybody had their own stories. We were able to share those stories and support each other and shine a light on who we really are as individuals to support the depth of our internal wisdom. Alice Walker was our surprise special guest that opened us up on Monday. It was a very special time with her.

And then you moved onto the weekend for the larger community.

We opened up our space. We opened up our hearts. We were a tight knit group by Friday. There was so much love, so much camaraderie. It was hard to fathom how it would shift and become a vast group of people. There were 300 people coming in, so we moved physical spaces to the new Community Meditation Center at Spirit Rock. Physically moving spaces helped us shift into the next phase. 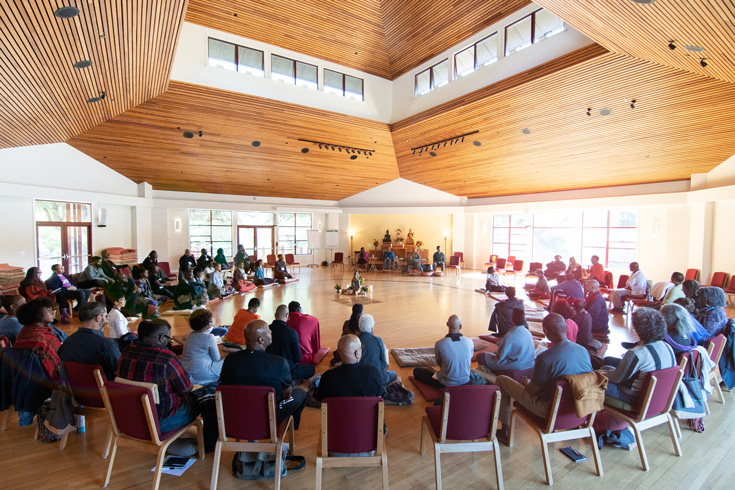 On Saturday, we had Angela Davis in conversation with Jan Willis. That was just unbelievable. They spoke about their history, them both being from Birmingham, Alabama. They’re only a few years apart in age, so they had the same history of living as Black people in Birmingham at that time and the terror that involved. It was an incredible conversation between two contemporary Black women. It was really rich for them to meet each other and to talk. They’re elders who have seen so much.

What did it feel like to be in a room of Black Buddhists — many or likely all of whom have experienced being the minority in Buddhist spaces — who have now finally come together?

For us, the buddhadharma is community. It’s not an individual pursuit.

In that room, you had a group with a shared history of oppression, married with the celebration of coming together and finding each other. What was that like?

How do you talk about the history of this country and what our people have gone through and our ancestors? It’s not so much about oppression. It’s the knowing between us. That knowing is a depth that nobody can even say or touch or do anything about. 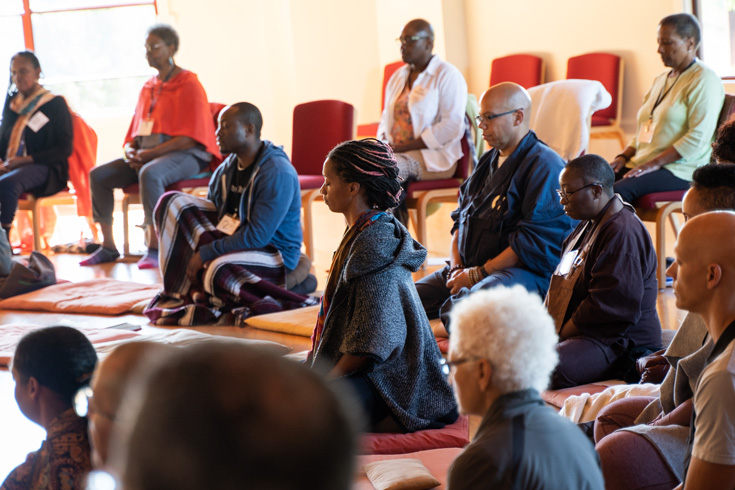 What were the spiritual practices that you engaged in, and were they different amongst a group of Black Buddhists?

When Black people come together, we do it the way we do it. Our ancestors are always with us. When blackness and the buddhadharma come together, that intersection is a whole other buddhadharma. It’s the tenets of the Buddha without a doubt, but our cultural mashup is something that is uniquely ours and involves celebration, music and ancestors. It involves all of who we are. We don’t leave anything outside the door.

Our spiritual traditions are animated and alive, and we bring that liveliness to the Buddha.

There was a framework of what we were going to do, of course. There were designated time slots, but more important was what emerged. It’s like jazz — I think of Black folks and jazz is the equivalent. We’re in between the beat and outside of the box, and that’s what the dharma feels like as well. It’s definitely the dharma and there’s the Buddha’s legacy, but the Buddha was a man of color. We’re just following in those footsteps from an African and an African American point of view. It was rich in color, taste, movement, and song. We left nothing out. Our spiritual traditions are animated and alive, and we bring that liveliness to the Buddha.

Being Black and Buddhist is a wonderful combination. We have been through so much. In Buddhism, there’s talking about suffering — what is suffering and the elimination of suffering. So for people that have had such systematized and institutionalized oppression on this North American continent, there is a depth of suffering that means what we are charged to do is healing. Not just ourselves, and not just this community today, but we’re going back generations of healing. I don’t know how our ancestors got through it, but they did. What it is to be Black and Buddhist is to be tapped into the stream of consciousness that predates our own physical existence right now.

I think that one of our main missions is to be able to take righteous anger, open it up, and allow it to actually be a part of our healing. I think what we are doing is transmuting that anger to a place that allows us to be even more compassionate, and to open up to each other and to ourselves.

It’s been about a month since The Gathering II ended. What did you take with you from that week?

We have lit a generation of Black Buddhist teachers.

I’m lifted by the elders, Jan, Alice, and Angela. We’re so blessed to have such wisdom among us — those who have the deep history of being from the South. They have lived the depth of the horror and terror that Black folks have lived and still came out loving and being wise elders for us all to see what’s possible to hold in our hearts — the actual idea that liberation is possible. Liberation happens all the time. I believe liberation is a moment to moment thing. It’s not some goal somewhere. It’s here in this moment.

In light of all that has historically happened to Black folks in America, to really find that internal freedom that becomes a collective freedom is the wisdom that I am walking away with. I have a smile in my heart all the time. There were so many amazing moments in that week. It’s with me forever. 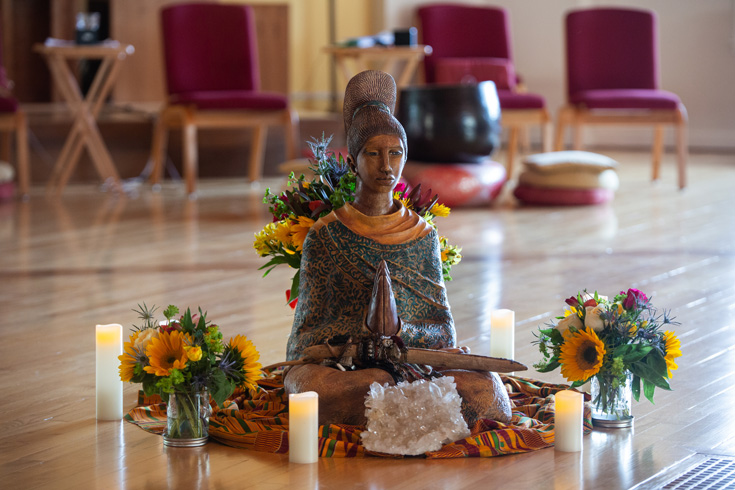 Do you think there will be a third gathering next year?

I just think this is not something that needs to happen every year. It’s too potent. Potency needs to have its time. It needs to go off into its corners of the world and impact whatever it’s meant to impact.

Will there be others? Absolutely, but I think it’s a at least a couple of years down the road. There’s a lot of activity that’s been happening since The Gathering. We have lit a generation of Black Buddhist teachers, and I don’t see that fire being extinguished for a long time, if at all. We will definitely regather again to ignite the fire, but I think that there’s a lot of gasoline on that one road last for a few years.