The second annual Buddhist Geeks Conference, all about the intersection of Buddhism, culture and technology, happened this month in Colorado, and Dungse Jampal Norbu was there. Here’s his report about what he saw there. 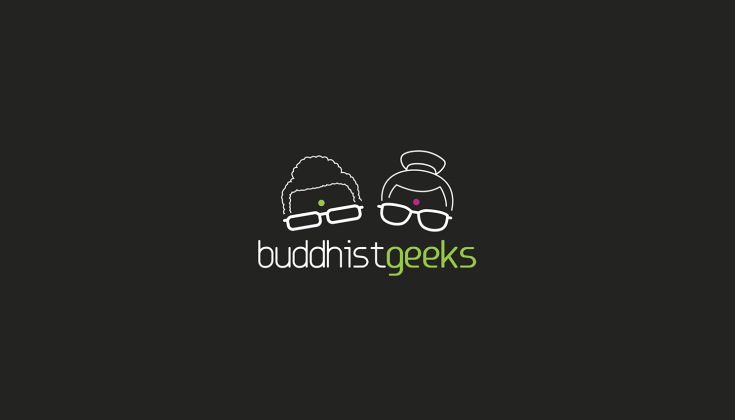 Ping, bleep, ding, swoosh. These were some of the many sounds audible at the second international Buddhist Geeks conference, where a variety of small bright screens illuminated the room. At the University of Colorado at Boulder, participants, designers, philosophers, and programmers gathered to discuss Buddhist philosophy, and its place in the modern world.

The conference hall resembled a dimly lit Apple Store. All around the room and above the stage were HD cameras, video streamers, speakers, projectors, soundboards, and an assortment of MacBooks streaming video, tweeting presentation quotes, and projecting slides overhead. Even the audience was armed to the teeth with the latest in digital tech, and there was never an announcement asking them to turn off their phones.

Speakers from around world, including Lama Surya Das, author Stephen Batchelor, and scientists and meditation leaders from a variety of backgrounds, gave presentations and led discussion panels. Most of the presentations focused on innovations in presenting the dharma to a “modern” western world, as well as the study and analysis of meditation and dharma’s effect on the brain.

“I hate to be a buzzkill,” she said, “but it looks like science is not making any progress, and has no idea what they were talking about.”

Britton’s presentation also included an array of charts, portraying conventional approaches to the benefit of meditation. The charts were intriguing, since many displayed progress in meditation with a gradual increase as if charting population growth. She spoke of the need for scientist to become more integrated in the practice of meditation, rather than just its analysis. She also spoke of the development of the Mind and Life Institute, which focuses on scientific discovery, as well as personal experience through practice and study.

Several other speakers advocated the integration of science and meditation, and the use of technology like YouTube and Twitter to spread teachings and support practice on a worldwide scale. One speaker commented that “by mapping traditions, we hope to use more universal language, rather than traditional, value-laden, and religious language.”

It was around this time that the word “geek” began to separate itself from “Buddhism.” The value of traditional language and teaching methods were called into question as progressive innovation and secular availability began to dominate the presentations and group discussions.

Although some speakers, such as philosopher David Loy, warned about throwing the baby out with the bath water, most seemed dismissive towards the structure and language of traditional Buddhism.

“A Buddhist center’s mission is to spread the dharma,” said Rohan Gunatillake. “But all they are really doing, from a business model, is preserving a building.” His comment further indicated a disassociation with traditional dharma, and particularly dharma centers, where meditators can find places to practice in solitude or with the support of a spiritual community.

Even the titles from both group discussions held during the conference, hinted at a kind of secular annexation. “Reinventing Buddhism,” and “Do-It-Yourself Buddhism” seemed less about the buddhadharma, and more about self-empowerment and independence to find one’s own dharma.

The self-empowerment revolution reached its peak at the end of the conference during author Stephen Batchelor’s final presentation. He elucidated his controversial views on the dharma in an eloquent, insightful, and provocative speech.

As he understands it, he explained, the dharma “is a body of impersonal practices and teachings, remained over time and managed in a different set or organization.” The speech seemed to consider dharma teachings to be less of a guide than as raw material ready to be reshaped by whoever was willing to examine it close enough. Any form of traditional Buddhism or dharma preserved through tradition, in his opinion, was less functional than what he called an “organic” dharma; subject to ones own understanding and engagement.

“The only things we preserve are already dead.” At this point, tweets from the conference snowballed as Batchelor concluded with his own revision of the teaching on the Four Noble Truths.

Despite the general exodus from tradition to modernity, the conference was able to maintain the same core values of selflessness and introspection. Speakers continuously encouraged new ways of worldly engagement and service beyond the meditation cushion.

“When we talk about the transformation which Buddhism facilitates,” said Loy during a group discussion panel. “Its not just about self-help. It’s about finding that there is no difference between self and other.”

Throughout the conference, participants and guests alike spoke and debated on new ways to engage the world. Conversations ranged all across the motherboard, from environmental engagement, activism, and relating to natural resources to compassion in the work place and responsibility and morality in corporate business. There were discussions on finding dharma teachers, Buddhist art and innovative technology, and for each subject, dozens of new ideas were formed for engaging in the world.

“We may not find an answer,” said one participant during a break, “But we do gain clarity.”

In the end, listeners from the audience walked away commenting on how inspired they were by the conference’s progressive encouragement, and on their eagerness to become more engaged in whatever way they could, with their own lives, with their communities, and with the world.

Dungse Jampal Norbu is a teacher in the Tibetan Buddhist tradition and dharma heir to Dzigar Kongtrul Rinpoche.