Author, professor, and translator of Tibetan Buddhist texts, Steven D. Goodman, passed away on August 3 at the age of 75. Michael Sheehy, one of his senior students, remembers the “cool wizardry” of his teacher. 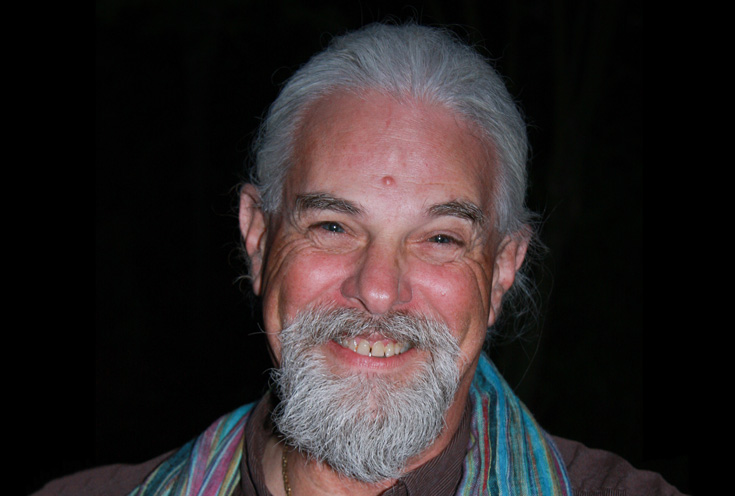 Steven D. Goodman (b. 1945) was a maverick scholar, poet, translator, and teacher of Tibetan and Buddhist Studies. He died on August 3rd at the age of 75 in his home in Oakland, CA of a rare genetic blood disorder. Steven’s passing comes as a sudden loss for his close students, friends, and family and a major loss for Tibetan Buddhism in the West.

Professor Goodman was the Research and Program Director of Asian Philosophies and Cultures in the Department of Philosophy and Religion at the California Institute of Integral Studies (CIIS) in San Francisco where he taught and advised graduate students in Buddhist Studies. He had taught Buddhist philosophy at the University of California-Berkeley, Rice University, the Graduate Theological Union, Nyingma Institute, and Naropa Institute. He was the author of several academic articles and co-editor with Ronald Davidson of Tibetan Buddhism: Reason and Revelation, a source book for Tibetan philosophical and visionary literature (SUNY 1992).

Steven regarded the divide between the scholar and yogi to be an artificial convention.

Having spent his childhood in Beverly Hills, Steven received his B.A. from the University of California-Berkeley and became a native of the Bay Area. In the 1970s, he worked for Shambhala Booksellers on Telegraph Avenue and taught Buddhist philosophy during the early days of the Nyingma Institute in Berkeley.

In 1984, Steven received his Ph.D. in Far Eastern Studies from the University of Saskatchewan in Canada under the famed German polymath and pioneer scholar of Tibetan Buddhism, Herbert V. Guenther (1917-2006). His dissertation detailed the structure of the Longchen Nyingtik, the “Seminal Heart” Nyingma Dzokchen treasure revelations of the Tibetan visionary Jigme Lingpa (1730-1798), of which he was a preeminent scholar. Steven was one of only four students to have received a doctoral degree from Professor Guenther, and the only one to teach and transmit Guenther’s distinct lineage of scholarship to graduate students. Having studied closely with Guenther, Steven was not only schooled in Tibetan Dzokchen and Mahamudra literature but was knowledgeable of systems philosophy and the new sciences of mind as well as a noble lineage holder in the European tradition of phenomenology.

At CIIS, Professor Goodman taught graduate seminars that were far ranging in scope – an expression of his own intellectual eclecticism and creativity. He taught courses on Buddhism and shamanism, cognitive science, cosmology, poetics, and phenomenology in addition to his regular course offerings in Tibetan language and Buddhist philosophy. Steven piloted his courses with a cool wizardry that applied the requisite academic rigor with disarming playfulness and humor. With mental acrobatics and brilliant verbal dexterity, he spoke with wit and wisdom in an American vernacular, making him a phenomenal communicator of Buddhist ideas. In the classroom, Steven’s lectures were a kind of performance art where he embodied the paradoxical pedagogies of the “wisdom crazy” trickster mahasiddhas who he often credited as exemplars. His courses radiated such intense contagious energy that students in concurrent classes would often drift by or sit-in during breaks to get a contact high.

His charisma, while reflected in all his courses, was most animate when he taught on Tibetan mystical poetry or what Steven called the “poetics of enlightenment,” a subject for which he had a passion and was awarded a Rockefeller Scholar in Residence at Rice University in 1994. A few of his translations of Tibetan Buddhist “songs of experience” – which Steven aptly described as “revelations revealing nothing” – are included in the volume, Tibetan Literary Arts (Shang Shung Institute 2007). This includes his translation of a Milarepa song that Steven titled “Everything is Everything.” This was based on an interaction that he had on the streets of Berkeley with a homeless person. After Steven signaled that he had no money in his pockets, the homeless man remarked “That’s alright man, everything is everything.”

Like an adept jazz fusionist – an analogy that he fondly employed, Steven riffed with improvisational spontaneity on impromptu topics that he taught or that were raised in the classroom, yet to his closest students he emphasized knowing what Miles Davis called the “butter notes.” With the care of a concerned parent, he drilled his graduate students in the fundamentals of Abhidharma and classical Indian Buddhist philosophical systems. His ability to make Abhidharma psychology and metaphysics accessible culminated in his book, The Buddhist Psychology of Awakening: An In-Depth Guide to Abhidharma, which was published by Shambhala Publications a few weeks before his death. Steven noted that he wrote the book “for the sole purpose of finding more flexible, humorous and joyful ways of being in the world.”

Steven was a force in the transmission of Tibetan Buddhism to the West. His behind-the-scenes influence can be detected in the many Buddhist books and organizations that he touched and students that he mentored, not to mention the Tibetan masters for whom he translated and led dharma study groups. He had an invisible hand in numerous books by Tibetan authors that include Tarthang Tulku, Tenzin Wangyal, and Tulku Thondup as well as books by Herbert Guenther, most notably Matrix of Mystery – a study incorporating scientific terminology to translate the Dzokchen Guhyagarbha Tantra. An academic advisor to the Khyentse Foundation, Steven served on their Academic Development Committee, Grants Review Committee, and Endowed Chair in Buddhist Studies working group. He was an advisor and founding member of the Working Committee that established 84000: Translating The Words of The Buddha, the international initiative to translate the Buddhist canon from Tibetan into English and make it freely available for download.  He was a founding board member of the Buddhist Film Foundation.

While skilled in academic repartee, and able to cut to the bone with razor-like criticality, Steven regarded the divide between the scholar and yogi to be an artificial convention. He cared deeply and lived intimately with the living traditions of Tibetan Buddhism, especially the Nyingma Dzokchen tradition. He studied with many of the major Dzokchen masters of his day – many of whom regarded him not to be an ordinary scholar – including Tarthang Tulku, Chogyam Trungpa, Dudjom Rinpoche, Chogyal Namkai Norbu, Thinley Norbu Rinpoche, Lama Tharchin, Bhaku Tulku, Lama Wangdor, and Tulku Thondup. He worked closely with Dzongsar Khyentse Rinpoche who wrote in a recent tribute that “Steven had all the requisite academic knowledge and achievements, and he was also one of those very, very rare scholars who looked at Buddhism directly for what it truly is. And so he dared to go beyond both the subjective and the objective.”

Steven loved birds and pointed-out passages in Buddhist sutras that detailed their unusual qualities. Frequently he mimicked a flying gesture with his arms outstretched like wings. His flat where we spent countless hours reading Tibetan texts together resembled the nest of a mythical Garuda bird. Since his passing, I have had the recurring vision of him embodied like in the Tibetan master Shabkar’s Dzokchen poem Flight of the Garuda which reads, “Not attached to anything, you are like a Garuda soaring in the sky.” Having expressed with unassuming artistry, his gifts of knowledge and care, Steven has flown from his nest in this world.