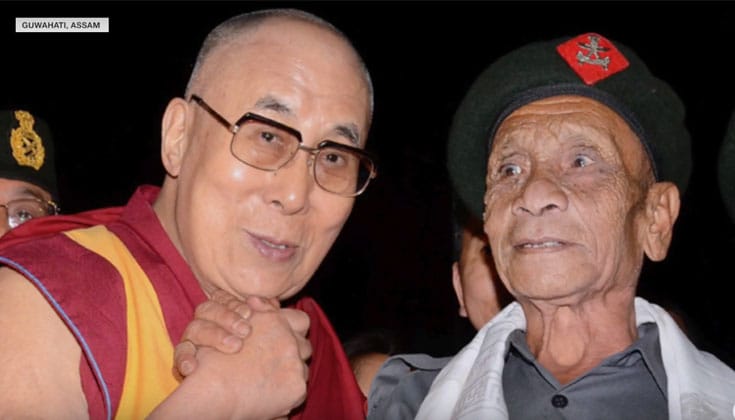 On Sunday, 60 years after their first meeting, His Holiness the Dalai Lama reunited with Naren Chandra Das, the Indian paramilitary guard who escorted him into India when he fled Tibet at the age of 23, The Guardian reports. The meeting took place in Guwahati during an emotional ceremony organized by the state government.

The Dalai Lama and his entourage fled Tibet in 1959, following a failed uprising against Chinese authorities in Tibet. Fearing abduction by the Chinese military, His Holiness disguised himself as a Chinese soldier and spent 13 days trekking through the Himalayas to India, where he and tens of thousands of Tibetans refugees would eventually take exile. [Read more about the Dalai Lama’s life both inside and outside Tibet here.]

When His Holiness and Das first met, Das was ordered not to talk to His Holiness as he escorted him into India on a “top-secret mission.”

“The days prior to my arrival in India were filled with tension and the only concern was safety, but I experienced freedom when I was received warm-heartedly by the people and officials and a new chapter began in my life,” His Holiness said.

When the two reunited, His Holiness whispered something to Das as they embraced. Das later revealed that His Holiness had said “He was happy to see me.”