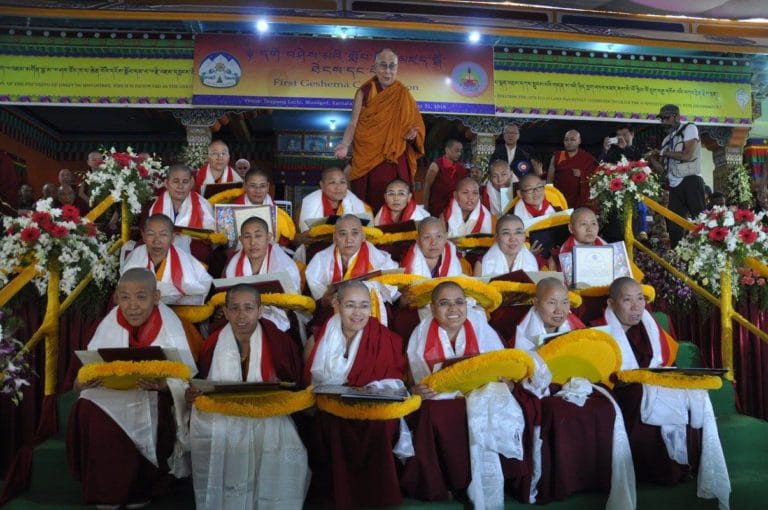 His Holiness the Dalai Lama with the twenty Tibetan Buddhist nuns who received the Geshema degree, at Drepung monastery, Mundgod on December 22, 2016. Photo via Central Tibetan Administration.

His Holiness the Dalai Lama awarded 20 Tibetan Buddhist nuns with Geshema degrees yesterday at a ceremony at Drepung monastery in Mundgod, South India, according to Central Tibetan Administration. The nuns are the first female monastics to complete the necessary training and examinations to earn the degree.

As Lion’s Roar previously reported, the Geshema degree is the highest level of training in the Gelugpa school of Tibetan Buddhism, and could previously only be earned by men. In July, the Department of Religion and Culture of the Central Tibetan Administration announced that all 20 candidates for the degree had passed the examination process. The exams take a total of four years to complete, with one 12-day exam period per year each May that tests the knowledge gained in a 17-year course of study.

His Holiness spoke on the importance of gender equality in education at the ceremony.

“Through the power of education, women have been able to rise up to prominent roles including leadership in various societies. Education has played a big role in the advancement of gender equality and material development,” His Holiness said.

The full graduation ceremony can be watched on the Tibetan Nuns Project website.