In the July 2017 issue of Lion’s Roar, 12 leading teachers, writers, and activists reflect on why we need the Dalai Lama and his message more than ever. Roshi Joan Halifax reflects on personal moments with him that exemplified his compassion and wisdom. 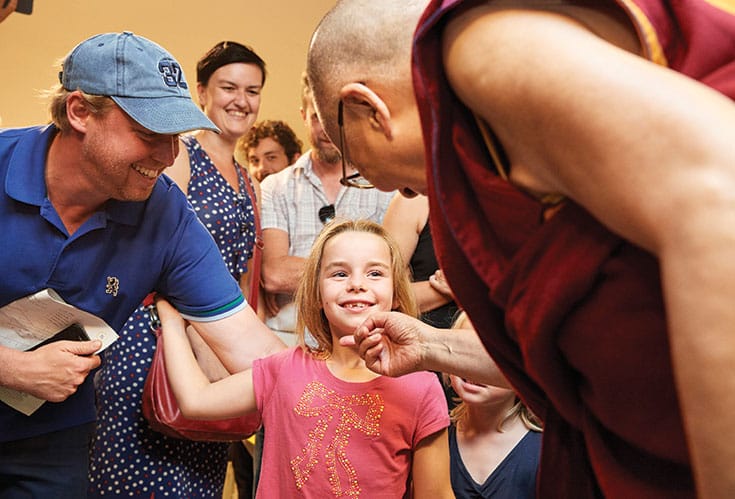 During a talk on compassion I gave at a neuroscience meeting, I shared with the Dalai Lama some words from a clinician who spoke about working with dying people. I saw His Holiness put his hands together and bow his head, his eyes filling with tears, when he heard the story of this doctor selflessly taking care of a woman with breast cancer.

It was remarkable to see how His Holiness shifted from a brief moment of empathy and seeming distress to compassion. I also saw this when visiting His Holiness’ residence in Dharamsala, where Tibetan pilgrims show up for a blessing after a long and dangerous trip to India. Shifting out of an intense conversation about neuroscience, his eyes softened as he gazed at the pilgrim before him. He took hold of their hand, offering a prayer and perhaps words of encouragement. A breath later, he would turn back to his neuroscience colleagues, and engage in the most technical conversation about neural pathways and the nature of consciousness!

His Holiness was totally alert, his eyes tender. The space immediately around him was still.

Once I approached him with a photo of a young Nepali boy named Tsering who had drowned saving the life of an American doctor who had been knocked into a river by a huge stone. The doctor would surely have lost her life had Tsering not jumped into the boiling Himalayan river and grabbed a board for her to hang on to. Though an excellent swimmer, Tsering got caught in a powerful eddy and was swept downriver in the relentless monsoon-charged current. Her life was saved, but his was lost.

Shortly after, I took a khata (a Tibetan ceremonial scarf) and Tsering’s photo to Dharmasala on behalf of his mother, in the hope that I could ask His Holiness to pray for an auspicious rebirth for her son.

When I shared the story with him, time seemed to stop. His Holiness was totally alert, his eyes tender. The space immediately around him was still. His Holiness said that Tsering would be reborn as a great bodhisattva for his selfless and compassionate act. These were the words I needed to hear. They were a gift I could carry back to his mother.

I went back to my seat in the conference and watched His Holiness shift his mental state, as quickly as stepping through an open doorway. His nimbleness of mind and heart was a good example of how the taste of suffering induces empathy, followed by compassion in someone who has trained the mind and heart to use suffering as a medicine to open to greater love and care.

His Holiness is a powerful example for all of us today, as we face our imperiled world. His great and tender heart and his boundless wisdom open him to the truth of suffering and freedom from suffering. This is why we love him, and why he continues to inspire us to practice and to serve.