Gesshin Greenwood argues that pie-making is the essence of Zen. 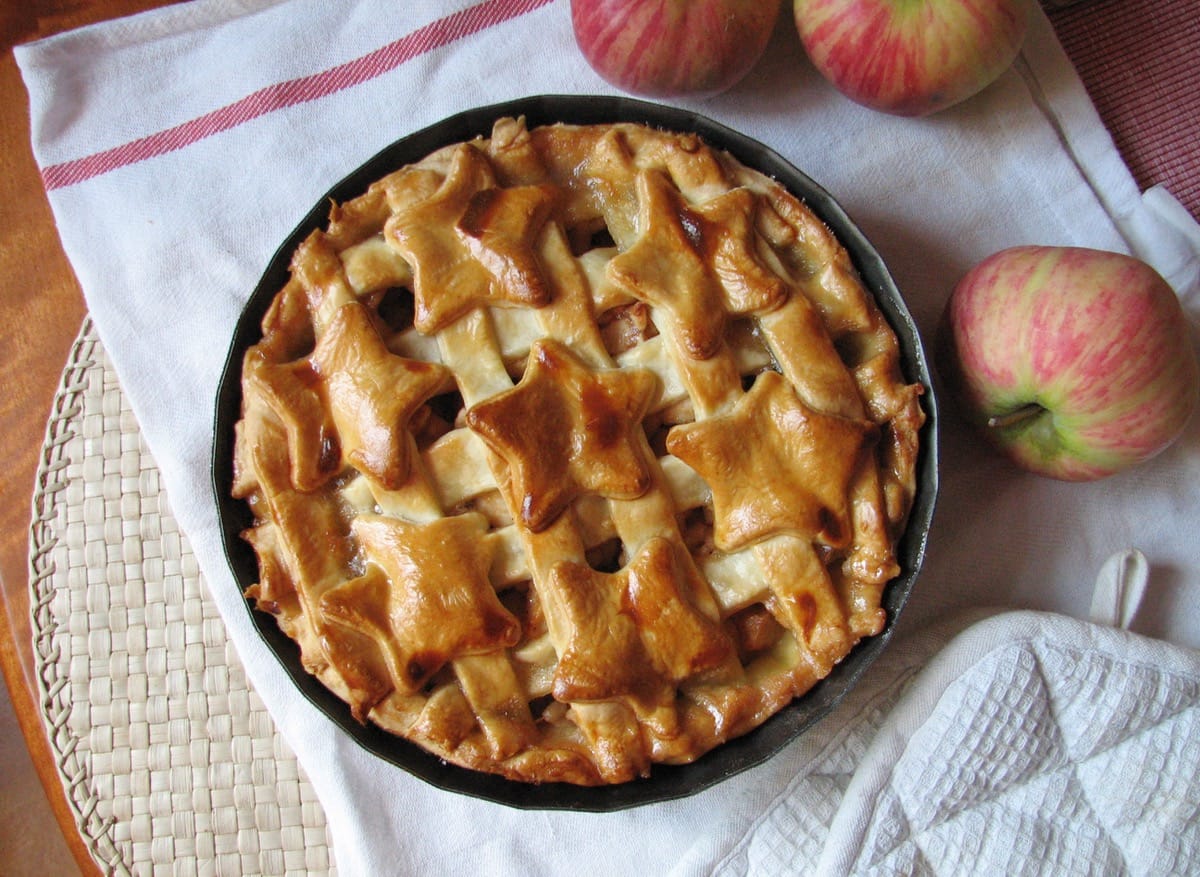 Some say the world will end in fire, some say ice. Some say the essence of Zen practice is awakening. Some say Zen and tea are one. But I, I think the project of Zen is pie-making.

Two months ago, I was going to a meeting about the bizarre, implausible, wondrous Zen temple thing James Ford and company and I are dreaming up. It was going to be followed by a precept renewal ceremony and potluck. Because one of my husband’s favorite foods is pie, I decided to make pie for the potluck. After struggling to make pie crust, I determined that the essence of Zen is pie. These are the reasons.

1. Pie is transmitted from pie master to pie master

From generation to generation, women have transmitted the wondrous, unfathomable, ineffable dharma of pie. If women did not arise in the world, there would be no pie. This is the marvelous truth of pie.

2. Pie is a tradition beyond words and phrases

The Great Way of pie crust is wondrous, subtle, and cannot be conceived through the mind. I have never made pie before, but my mother makes very delicious pie, so I asked her for a recipe. She emailed it to me and I followed the instructions faithfully. However, my first attempt at pie crust failed. The batter did not hold together. I tried again, using a fork instead of a knife to cut the butter into the flour, but still the batter did not hold together.

I grew up watching my mother make pie. I stood in the kitchen with her; I helped her measure out butter and Crisco. I watched her roll out the perfect, yellow, cold, buttery dough onto the floured service. I saw and touched and tasted that dough. This was beyond a recipe. I have felt and tasted good pie crust with my hands and tongue.

This is the marvelous truth of pie.

So when I followed my mother’s recipe, I knew something was wrong because the dough did not stick together. I sensed this was because I did not mix the butter into the flour well enough. I knew this not from reading a recipe. Pie is a tradition beyond words and phrases. It is impossible to make good pie without having eaten pie, and being taught to make pie.

This doesn’t mean that words are unimportant. Words are very important. Without words, we could not distinguish between “knife,” “fork,” “Cuisinart,” and “blender.” We would not know that an all-butter crust is different than 50/50 butter and Crisco. These differences are crucial. So we need good cooking instructions, but we also need to eat pie and see pie made.

3. If at first you don’t succeed, pie, pie again

When my mother emailed me this pie recipe, she said, “Making a pie looks difficult, but it’s really just the next step and then the next step.” I remember when I was living in Nisodo monastery, my mean senpai told me I had to make new curtains for every tan in the zendo. That was about 40 curtains! I did not know how I would fit all this in around my daily chores, sitting zazen, and ceremonies. It seemed impossible. I called my teacher (crying, probably) and he told me, “You can make one curtain. And then another curtain.”

So I made one curtain, and then another. I didn’t make it all the way to 40, because my senpai got bored with that job, but I did make a significant dent. This is really how we progress along the spiritual path: just one step in front of the other. Dōgen wrote “Do one thing, encounter one thing,” meaning that we just face the thing in front of us and do our best. That is really all we can do. But it adds up over time.

Without others, there would be no potluck, no pie, no making of pie.

My pie crust failed two times and I went to bed in tears (yes, I am 31 and cry over broken pie). I knew the problem was that the butter wasn’t cutting into the flour. But we don’t own a food processor. The next morning, I woke up and thought, “What if I divided the flour in two, and then blended in the butter in two patches in the immersion blender food cutter?” So this afternoon I tried it. And the batter stuck together!! If at first you don’t succeed, pie, pie again. Your failures are not as monumental as you think.

4. Pie is best shared with others

It’s all my husband’s fault; he really loves pie. I wanted to make a pie for him. And, well, the potluck. If there were no potluck, there would be no pie. And I would not have gone through three rounds of pie-making if it was just for myself. When we think of others’ happiness, this gives us more energy. Without others, there would be no potluck, no pie, no making of pie.

5. Do not neglect your life in the search of pie

Pie requires dedication and single-minded attention. However, don’t neglect the things around you just because you’re really into pie. If you are so into making pie, for example, that you forget to take the dog out to pee, and then your husband comes home and the dog pees all over the bed, and so he has to wash the duvet and sheets immediately upon coming home from work, then you have overlooked the essential point of pie.

When the Dharma of Pie is something we can talk about, it is pie tins, peaches, and Cuisinarts. When it is beyond words, then there is no pie tin, no peaches, and no Cuisinarts. This is all to say that delicious pie is eaten in a second; pie crust breaks, even though we want it to be strong. The nature of the egg-wash makes the top of pie crust gold, and it is best served with whipped cream.