Matthew Bortolin, the author of The Dharma of Star Wars, unpacks the Buddhist themes in the latest installment in the series, The Last Jedi. Warning: Spoilers ahead. 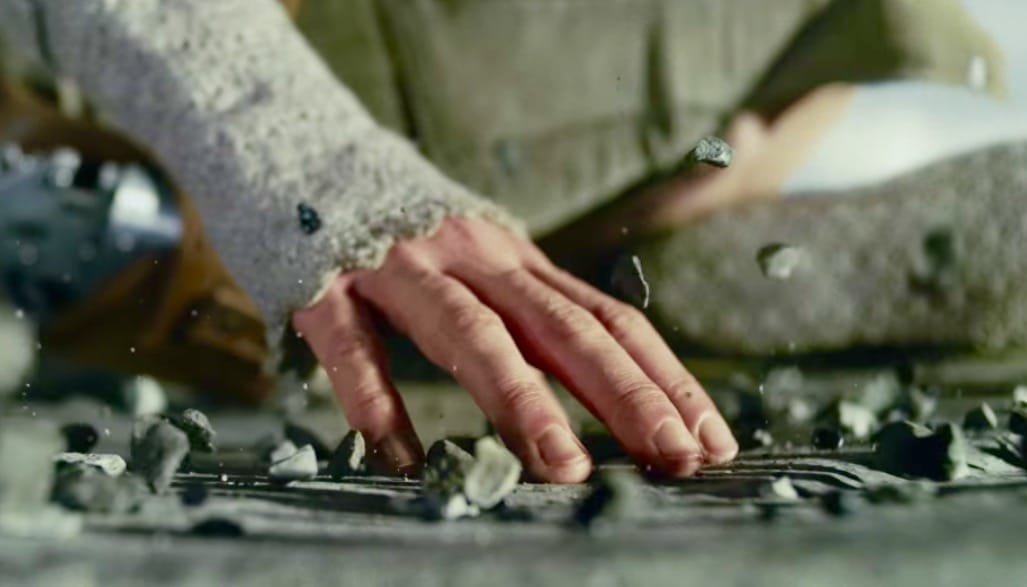 Rey makes rocks float while meditating on the Force.

In Star Wars: The Last Jedi, writer-director Rian Johnson cranks up the volume on the Buddhist chords first strummed by George Lucas in the earlier films. I doubt Buddhism was on Johnson’s mind when he crafted The Last Jedi¸ but the legacy of Lucas’s mythology is very accommodating to a Buddhist interpretation.

The Force Awakens was a safe Star Wars movie that expertly wove the themes of the original trilogy into a familiar narrative. In The Last Jedi, we got a bold tale that turned the saga’s established tropes inside out, pushing them in surprising directions. Among them, I took notice of a few Buddhist themes.

Non-dualism in the Balance of the Force

The prequels coined the phrase “balance of the Force,” getting us thinking in terms of duality (light vs. dark, good vs. evil). The Force was out of balance because the dark side had grown too strong, obscuring the light. To bring balance, Anakin Skywalker, as prophesized, was to destroy the evil Sith. In a twist, the light champion fell into the darkness. It wasn’t until his son, Luke Skywalker — out of compassion — reminded Anakin of his true purpose that he finally fulfilled his destiny.

Nothing is separate or excluded. It’s a single existence, unified by the Force.

In The Last Jedi, balance comes up again. Except it’s now presented in a broader sense. Luke instructs Rey to meditate. “Just breathe,” he says, before asking, “What do you see?” Rey sees light, dark, life emerging and dying, the cycle of birth and death. Luke calls this “balance” —light complementing dark. It’s not violent tension between good and evil, but complementary opposites. Nothing is separate or excluded. It’s a single existence, unified by the Force. This comes much closer to the Buddhist notion of non-dualism: not one, not two.

Supreme Leader Snoke reiterates this theme later in the movie: “The darkness rises… and the light to meet it.” Snoke may have been thinking dualistically, but he touches on truth: you can’t have one without the other. There is no light without darkness. No nirvana without samsara. No insight without suffering.

Destiny got a lot of play in the previous Star Wars films — but the law of cause and effect was strong in this one.

Rey’s trippy experience in the dark side cave (where countless iterations of herself repeat endlessly ahead of and behind her) symbolizes how one action begets another, and another, and another, until the flow of actions returns to the actor. Rey seeks the identity of her parents, but there is no answer other than herself reflected back. Her actions and choices define who she is, not her ancestors.

Kylo Ren’s past actions define him as well. The murder of his father, Han Solo, weighs heavily on him in The Last Jedi. We see this burden when he hesitates to fire on his mother’s ship, and when Luke says, “If you strike me down in anger, I will always be with you. Just like your father.”

Luke also bears the consequence of his past actions. In a flashback, we see Luke considering killing his nephew, Ben Solo — who would become Kylo Ren. Luke senses great darkness in Ben and is afraid. He ignites his saber to destroy that darkness, but then the fear passes. Compassion returns to him. Luke cannot kill his nephew any more than he could his father. Unfortunately, Ben wakes, mistakenly reads murder in his uncle’s eyes, and attacks. Luke’s actions, as Rey points out, created Kylo Ren. This moment haunts Luke for years, until he comes to terms with the past and meets the present head-on.

A Painting of a Rice Cake Does Not Satisfy Hunger

In a conflicted state, Luke rushes to destroy the original texts of the Jedi Order. The Jedi had fallen to hubris, as had Luke when he fell victim to his own legend and almost killed his nephew. He is determined to destroy the past and the root of Jedi arrogance along with it.

But Yoda beats him to the punch, seemingly destroying the texts with a bolt of lightning. (The texts weren’t there, but safe on the Millennium Falcon, where Rey had hidden them.) Luke’s false bravado fails. His threat to the sacred texts was mere bluster, and he is appalled at their destruction.

“A painting of a rice cake does not satisfy hunger.” This is a Zen expression that warns students not to hold too much reverence for sacred texts and teachings. They are just fingers pointing to the moon. What is truly sacred is this moment — reality, here and now.

The movie was weird. But that’s no criticism.

Yoda reminds Luke of this. He tells him to forget the past, let go of ancient teachings, and live the truth of the present. Luke must face reality and do what is needed now.

Everything is sacred. The present moment, the Jedi texts, the rice cake, the canvas, the ink, and the brush. It’s unclear whether Luke realizes this, but the movie itself seems to suggest this deeper meaning. After all, isn’t Luke’s projected illusion of himself in the film’s climax a painted picture — an artful representation, as real in battle with Kylo Ren as Luke is meditating on a distant planet?

The Last Jedi gave us something different. A grumpy Luke. Flying Leia. Astral projection. In a word, the movie was weird. But that’s no criticism. Weird is what was needed to breathe new life into the galaxy far, far away. And a little Buddhist philosophy doesn’t hurt.