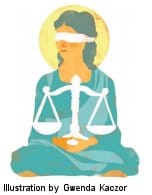 Traditional legal training focuses on overcoming external challenges. Now, an increasing number of lawyers are training themselves to work on their inner life in an effort to improve their law practice, benefit clients and colleagues, provide better training for other lawyers, and, ultimately, yield better justice.

The leading initiative in this area is the Law Program of the Center for Contemplative Mind in Society, headquartered in Northampton, Massachusetts. The program sponsors annual retreats and other gatherings for lawyers, judges, professors, and students. It held its first retreat in 1998, for Yale Law School students and faculty, led by mindfulness luminary Joseph Goldstein. The program has held over twenty retreats and events since, including its flagship annual retreat for legal professionals at Spirit Rock Meditation Center in Marin County. In 2008-2009, the program held retreats on both the East and West Coasts. The retreats combine sitting and walking meditation, yoga, qigong, speakers, and discussion.

The Law Program’s leading light is Charlie Halpern, a renowned public interest lawyer who is chair of the board of the Center for Contemplative Mind in Society. In 1982 when he became the founding dean of the City University of New York’s law school, he started practicing meditation to work with the resulting stress. Since 2002, he’s been leading a weekly meditation group at Boalt Hall, the law school at the University of California at Berkeley, together with Doug Chermak, the law program’s director.

Chermak, an environmental lawyer in Oakland, told me that the crux of the Law Program is “effective and sustainable lawyering” and “the meditative perspective,” the view that a practitioner of a contemplative discipline brings to their professional and personal life. He says the central question is, “How does meditation affect the quality of your listening, your ethics, and any kind of interaction you would have as a legal professional?” One of the main aims is to help lawyers learn to cultivate insight in the midst of the challenges they face.

“Legal training,” Chermak says, “teaches you to think like a lawyer, but there’s no focus on dealing with the intense emotions involved in this work.” Lawyers who come to retreats are looking for ways to integrate the work they’re doing with the other parts of their life, so their work “is not cut off from who they are as a core human being.” Lawyers often deal with nasty people and hot disputes and they are taught to meet fire with fire, but that struggle often brings deep pain and burnout. In using contemplative techniques, Chermak says, lawyers may discover a way to be “fierce, even warrior-like if need be, but in a way that is also wise and kind.”

The Law Program’s annual retreat is on hiatus this year. Instead, the focus is on a major conference, “Meditation in Law: Sharing Current Practices and Mapping Future Horizons,” cosponsored by the Baldy Center of the University at Buffalo law school, where it will be held in early October. The conference, Chermak says, “brings together lawyers, law professors, judges, mediators, dispute resolution practitioners, and law students, whatever their level of familiarity with mindfulness. We’ll seek to create opportunities for cutting-edge research on meditation in the legal profession and start a leadership group to promote the continuing presence of meditation in the law.” It will be the first major gathering of its kind since Harvard Law School offered a symposium on Mindfulness and Alternative Dispute Resolution in 2002.

Robert Chender has been practicing meditation as long as he has been practicing law, more than thirty years. Recently he has been trying to bring together these two important parts of his life. In September 2008, he decided to attend a retreat sponsored by the Law Program at Menla Mountain Retreat Center in Phoenicia, New York. After that, Chender says, he felt even more sure that “it would be useful to create a way for New York lawyers to gather and discuss the application of mindfulness practices to the practice of law.” He had already approached the New York City Bar (with more than 23,000 members) about doing something, and after some back and forth, it gave him “a one-shot opportunity to do a presentation” not long after he returned from Menla. Sixty-five people showed up.

After such a successful turnout, the bar approached Chender about holding a series of ongoing presentations on the topic. The group meets monthly, with attendance ranging from fifteen to forty-five. “There are quite a few meditators in the profession, so I’ve been able to stop doing all the presentations myself and invite guest speakers,” Chender says. Following twenty minutes of meditation, there’s a presentation about how meditation practice might affect a law practice. Afterwards, the participants gather in a large oval to discuss what’s on their minds.

In November, Chender presented the first-ever daylong program on integrating mindfulness practice with law practice at the City University of New York law school. The thirty-five participants received continuing legal education credits (CLE) for the program, which included about three hours of meditation practice. Chender is also a presenter at an annual continuing legal education program cosponsored by the Vermont Bar and Tail of the Tiger at Karme-Chöling meditation center in Barnet, Vermont. In January, he began a blog called Contemplative Law (http://contemplativelaw.wordpress.com/). “Mindfulness,” Chender says, “could help them accomplish what they need to in ways that are better, and less unhealthy for their mind and body, than they were doing before.”

While in law school at the University of Florida in the early nineties, Scott Rogers, author of Mindful Parenting, learned transcendental meditation from a counselor who helped students work with the stress of a legal education. Shortly after law school, Rogers began to practice mindfulness meditation with the Miami Beach Sangha, a group of students inspired by the teachings of Thich Nhat Hanh. He also became interested in neuroscience and secular mindfulness. In early 2005, he attended a Mindfulness-Based Stress Reduction program with Jon Kabat-Zinn. While there, Rogers met Dan Siegel, author of The Mindful Brain. Siegel’s work, together with Rogers’ own mindfulness practice and teaching experience, inspired Rogers to start a mindfulness program for lawyers.

Rogers’ program, Jurisight, uses legal language and thinking to express mindfulness principles. For example, Rogers says, “The attractive nuisance doctrine refers to perils that are also attractive, such as a swimming pool that’s easily accessible by children. They’re enticed to jump in, but unsupervised they could drown. In Jurisight, I talk about how jealousy and anger are somehow attractive places to go, but they are also nuisances. How can we catch our mind as we begin to move toward these attractive nuisances?” In Rogers’ daylong programs, which earn lawyers CLEs, he uses these as discussion catalysts that become reminders. “If we can connect a subtle principle of mindfulness to a term that already resonates in the lawyer’s brain, it becomes more accessible, more likely to be called upon, and more likely to become a reminder to practice during times of challenge.”

In June, Rogers presented a program at the Florida Bar Convention called “Mindfulness, Neuroscience, and the Law,” which focused on improving effectiveness and reducing stress through understanding how the brain works under certain conditions. He was also invited to offer a noncredit, eight-week, two-hour-per-week Jurisight class for first-year law students as part of a wellness initiative at the University of Miami law school. Fifty students, or about 10 percent of the class, completed the program this year.