For over five years now, a little-known prisoner subscription program has been sending copies of Lion’s Roar magazine to prisoners across the country. On the latest episode of our podcast, three members of our staff discuss how the initiative came to be. 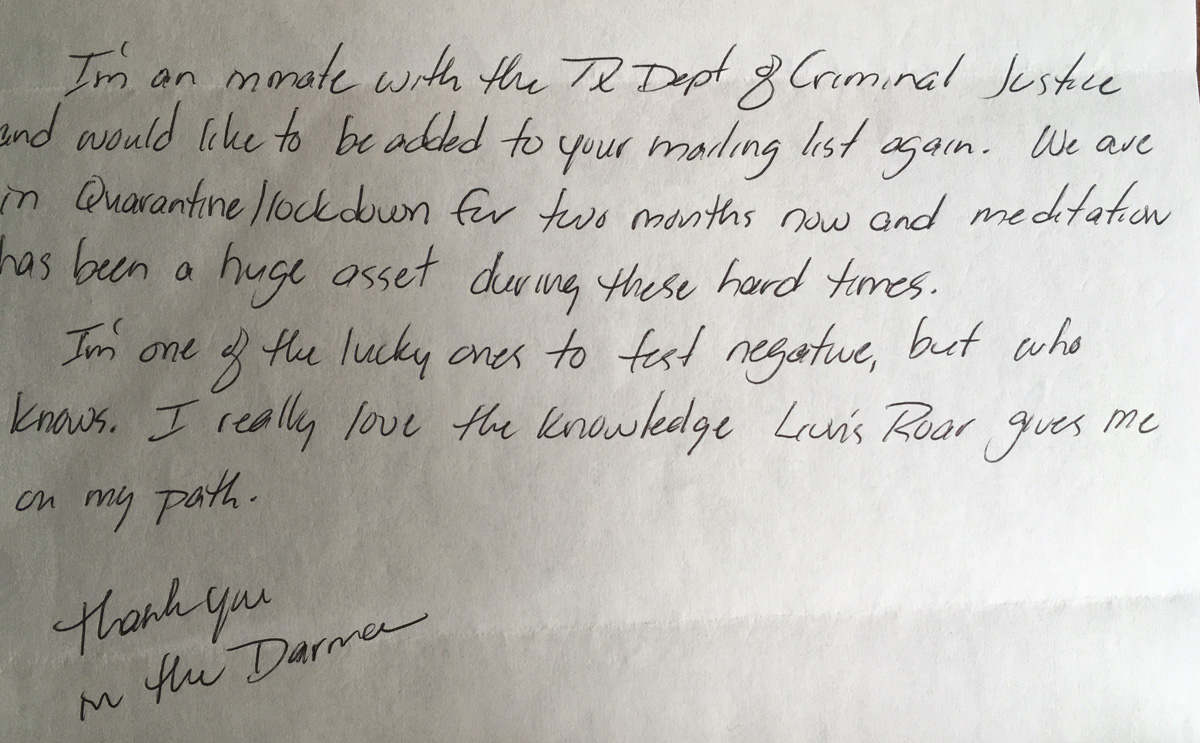 A letter to Lion’s Roar from an inmate in Texas.

As we head into the holiday season, we’d like to share a little about an important but perhaps lesser-known Lion’s Roar initiative, which, like all the others, only becomes a reality through support of readers and listeners like you. For over five years now, a little-known prisoner subscription initiative has been sending copies of Lion’s Roar magazine to prisoners across the country in response to requests from inmates seeking to find instruction and solace in the dharma.

In the latest episode of The Lion’s Roar Podcast, you’ll meet three Lion’s Roar staff members, as audience engagement editor Ross Nervig talks to circulation associate Rebecca Pearson and Bakes Mitchell, who handles development and partnerships for us, about our program to share the dharma with prisoners in need. Such a simple thing, but it makes such a difference. Please give the pod a listen, it’s a short episode — but nonetheless quite sweet.

Lion’s Roar is hardly the only organization helping get Buddhist wisdom and counsel to prisoners who want it. There are so many organizations doing good work along these lines; see our roundup of them here.

Thanks for pitching in where you can, and for helping us to do the same.

Have a listen, or read a transcript of the conversation below:

Ross Nervig: How did the idea of providing subscriptions to inmates occur? What sparked this program?

Rebecca Pearson: Well, the inmate subscription program was advertised in a really old issue of Lion’s Roar that was published prior to me even working here. So this was more than five years ago, that this program was first advertised. And when I started into this role of circulation associate, I quickly noticed a constant stream of incoming handwritten letters from inmates looking for a subscription. So many of these requests expressed how important the subscription was to them and how much it meant to them to receive our magazine. So I just continued to set them up with complimentary subscriptions. Currently, there are 102 active subscriptions to inmates. It’s really impossible for me to say just how many have been gifted in total over the last few years, I’d say around 80 to a hundred a year. We also are currently reaching out to Buddhist prison projects across the United States in order to send them some older back issues of Lion’s Roar and some of our special issues. So far we have coordinated with three different organizations and have sent out around 800 back-issue copies to be distributed in their respective prison system.

Ross Nervig: One doesn’t often think about Buddhism and convicted criminals in the same thought. How do you think receiving the dharma through subscriptions helps these men and women?

Bakes Mitchell: The dharma isn’t exclusive to people who have made all the right choices. And one of the principles of the Buddhist teachings is that we’re all workable, that our lives are workable and that there is no final place at which we’re not able to move forward and improve our lives and relationships with others. So I think we’ve all made mistakes in our lives, and convicted criminals are in many ways not that much different from the rest of us. They’ve made bad choices in their lives but they’ve expressed an interest in improving themselves and in studying the dharma.

In some ways, they’re further along the path than many of us who have a passing interest in the dharma. These are people who are really working to explore what went wrong and how things might be different. Having access to a broad range of teachings like Lion’s Roar, they can really begin to work with their lives in a very positive way if they are interested in the dharma. Having some access to the teachings would certainly be a relief when the dharma provides so many skillful means and so much hope for the workability of our lives. I think that for all of us the teachings have been helpful and important during this time.

Ross Nervig: If readers of Lion’s Roar want to help fund this program or others, what steps should they take?

Rebecca Pearson: Honestly, the best way to help support this program and others is simply to donate to the Lion’s Roar Foundation. You can go to giving.lionsroar.com and make a donation there. These donations help us to support all of our current initiatives and outreach that we have ongoing, including the prison project that we’re working on. Alternatively, if you have a family member or a friend who is currently incarcerated and you’d like them to be a recipient of this program, please reach out to us at [email protected] via email. You can pass along their mailing information and we will try to get them set up with a subscription. I should note at this time, we are limited to subscriptions within the U.S. but please feel free to reach out!