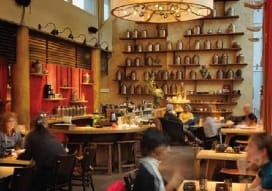 Being “connected” nowadays means you’re always plugged in. You’re phoning, texting, emailing, all the time, wherever you are. To Jesse Jacobs, who started Samovar (left) in San Francisco, “connected” means something completely different, perhaps even the opposite. In fact, at Samovar’s three tea lounges wi-fi is decidedly unavailable. “If you want to really connect,” Jacobs says, “you have to disconnect.”

Jacobs grew up practicing meditation, yoga, and martial arts. His parents, Lenny and Barbara Jacobs, were publishers of the groundbreaking spiritual magazine East West Journal for almost twenty years. They provided an early example of the kind of social entrepreneurship exemplified by Samovar. After graduating from college, Jacobs went to work in high-tech, an easy step for someone in the cyber generation. “But after about four years,” he says, “I found myself totally disconnected from myself and other people. I was working on a dreary project in Seattle, looking out over a sea of cubicles. One day I was drinking a cup of Oolong tea from Taiwan called Monkey Picked Iron Goddess of Mercy that a friend had given me. It was delicious and aromatic and I suddenly paused completely. That’s when it came to me. I needed to do something where there was much more connection. And what a great thing to revolve it around: tea.”

“Tea culture” had been part of Jacobs’ life since childhood and he came to appreciate the ritual of its preparation and serving. It slows people down. There are many places in the world where before anything else happens, tea is served. “Coffee’s good for a quick jolt and go,” he says, “but when people meet over tea, you will see something different, less kinetic and frenetic. It grounds you.”

Eight years ago, Jacobs opened his first location, on the edge of the Castro district near Mission Dolores Park in what was widely thought to be a dead location. A coffee shop had just closed there. “We also came in for a lot of criticism for our no wi-fi policy on yelp.com, the restaurant rating site,” he says, “but slowly people started to come around to what we were doing.” It was so successful that several years later the city invited Samovar to open in the Yerba Buena Arts Center downtown, in an abandoned Starbucks. In 2009, Samovar’s third location opened up on Page Street, catacorner from the San Francisco Zen Center, in yet another former coffee shop.

Samovar is known for its broad selection of teas, served by staff who can give you the story behind each of them, and also offers unique and tasty food, so the lounges have become prime places to meet and greet and share a meal. Jacobs has capitalized on the recognition by holding talks and tastings and performances there. He also fosters partnerships with like-minded groups. Samovar recently released a new tea, Zen Mind, that will help support Zen Center. On his companion website, realritual.com, he’s doing a series of video interviews of values-driven entrepreneurs. The company’s website (samovarlife.com) also provides a rich offering of thoughtful ideas and products.

For Jacobs, human connection is the central value in the business. In his view, it extends to how he works with managers, staff, customers, and suppliers, so everyone feels they’re an organic part of the whole. “We are a values-based business. My vision is that everything surrounding the simple ritual of serving tea is connected. We connect the customer to the server to the farmers who grew the leaves. We know where all our tea comes from and we have relationships with those people. There are no mega-agribusinesses involved here.”

Jacobs has a young son now, so he’s very attentive to the need to disconnect in order to connect. “It’s so easy to get consumed and just never stop working, always responding, never coming from a deeper place. Right now I’m working on becoming a single-tasker. I try to take time with every message I send and keep focus. When I’m at work, I focus on that. When I’m home, I focus there. Meditation, yoga, and tai chi help. I just joined Zen Center and we’re making arrangements for the whole staff to become members as well.”

One of the featured speakers at Samovar last year was Marc Lesser, who talked about how to navigate the new economy. Lesser, who has been practicing meditation for thirty years, is the author of Z.B.A.: Zen of Business Administration and, more recently, Less: Accomplishing More by Doing Less (both from New World Library). He earned an MBA from NYU’s graduate school of business and spent fifteen years developing a greeting card company, Brush Dance, from a garage operation to a multimillion-dollar business. He now operates ZBA Associates, which provides consulting services to businesses around the world. He was a member of the team that developed Google’s Search Inside Yourself curriculum, which trains Google employees in mindfulness and social intelligence.

Lesser’s business philosophy of accomplishing more by doing less marries his hard experience in starting and running Brush Dance with his training as a Zen priest. “There’s a real need and hunger for mindfulness and awareness in the business world,” Lesser told me. “There are clear boundaries concerning bringing religion into the workplace, but once people understand that mindfulness and awareness are not religious per se, they’re eager. They long for meaning and connection and a better way of being in the place where they spend so much of their time and energy.”

Not surprisingly, Lesser says, businesspeople don’t respond well if you approach them with a simplistic, don’t-worry-be-happy prescription. “From my years at Brush Dance,” he says, “I know what it means to be concerned day to day about concrete existential pressures like productivity, performance, return on investment, and financial targets.” While Lesser is sensitive to what busy entrepreneurs and corporate leaders face, he also feels it’s important to be direct with them, just as Zen teachers are direct, sometimes even shocking.

He tells the story of waiting in the reception area of an internet company where he was about to have a coaching session with the CEO. “I look up,” he says, “and I see the CEO running by with a cellphone pasted to his ear, and then running back, and then he waves me into his office. He’s almost panting.” Lesser slowed down the interaction by talking about a dream, not the usual thing for busy people in a corporate environment. In the dream, a doctor says to him, “I only do one thing. I remove false beliefs that people have.” Lesser then asked the CEO, “Do you believe that to be CEO you need to be frantic? Do you hold the belief that it won’t be okay if you aren’t always moving? What would happen if you slowed down and took stock of what you were doing?”

The dream talk followed by the questions brought the leader to a halt. That became an opportunity to explore the benefits of mindfulness: slowing down and focusing. Very important for Lesser was that they could explore the benefits of awareness, being able to see how our beliefs are shaping our world, deceiving us, or trapping us in habitual responses. “With some awareness,” he says, “people can begin to let go. They feel a little liberated, that there are more choices and possibilities.”

Like Zen students, Lesser says, “Entrepreneurs are the most patient and the least patient of people.” They know the path is long and arduous, but they’re strongly motivated to go ahead. This combination can work well, he says, particularly when meditation practice enables you to “see your changing environment more clearly.” Both entrepreneurs and Zen students look into the utter uncertainty of the future, but step forward anyway. The key skill in both cases, Lesser says, is “being able to move smoothly from the focus of mindfulness, which eases the natural busy-ness in our minds, to awareness, which allows us to just be with whatever arises within and around us. The practice is all about developing a responsive and flexible mind. That’s also the critical tool in business and entrepreneurship. One of my favorite quotes from the business world is, ‘Let cash be your king, but let flexibility be your god.’”