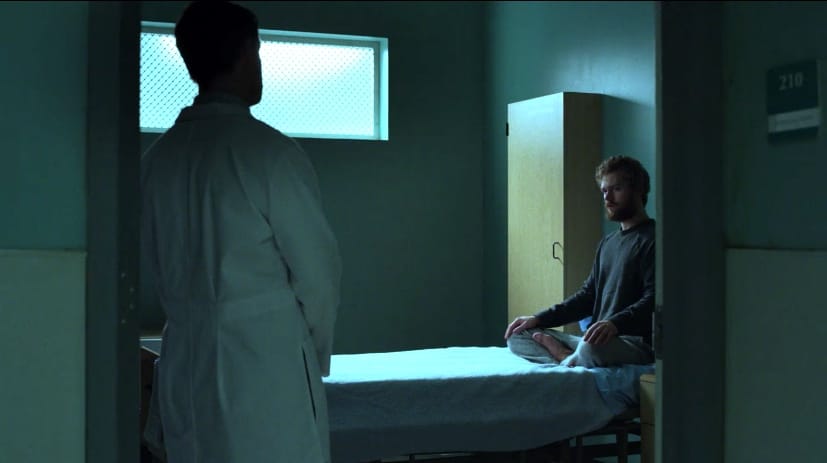 Danny Rand meditates — as a mental health professional, who has apparently never seen such a thing, looks on, mystified. From Marvel’s Iron Fist.

Now a much-discussed (and derided) Netflix series, Iron Fist began as a Marvel comic created in 1973 by Gil Kane and Roy Thomas. Its lead (and man behind the superhero’s mask) is Danny Rand who, after a family tragedy — in the comics a climbing accident; the show a plane crash — comes to live in K’un L’un, a mystical city that echoes Shangri-La or even the mythical Buddhist land known as Shambhala.

Danny, a child and the only survivor, is taken in by the Order of the Crane Mother, a group of Buddhist warrior monks. As he grows and trains, Danny becomes the greatest warrior of the order, earning the title of Iron Fist and gaining the mystical powers of Shou Lou the Undying — giving him the ability to, um, punch things really good. And hard. Upon completing his training, Danny heads home to New York, to reclaim his father’s company.

Oh yeah, he’s a billionaire, too. Stop me if you’ve heard this before.

When the show was announced, many fans called on Marvel to cast an actor of Asian heritage as Danny Rand, reclaiming the Iron Fist character from his origins as a by-the-numbers “White Savior,” as seen in so many of the martial arts films that were popular at the time of Iron Fist’s inception. Fans hoped to see Marvel jettison this tired, racist trope — instead of doubling down on it as in the recent Doctor Strange film adaptation, where The Ancient One, a transdimensional being typically depicted as an old Asian man, was played by Tilda Swinton.

So what is the White Savior trope? tvtropes.org calls it “Mighty Whitey.” The basic gist is this: A white character, usually a man, finds himself lost in a foreign, exotic, often vaguely Asian setting. Alone and without anyone to support him, he works to overcome his position as an outsider and eventually achieves mastery over the culture in which he’s stuck, often becoming the greatest warrior or leader in the land. There’s no shortage of examples, but the aforementioned Doctor Strange and The Last Samurai are recent ones.

The Mighty Whitey trope, obviously, marginalizes people of different cultures and ethnicity by placing a white man at the top. It also often leads to a boiling down of other cultures through depicting only the parts that Western pop culture deems “cool” — regardless of whether that depiction is charitable or even accurate.

For a bit it seemed possible that Marvel might change its tune: as talked about here in 2016, fans petitioned the media giant. There was even an Asian-American actor, Lewis Tan, in the running to play Rand until relatively late in the game. But soon enough Marvel announced it had cast Game of Thrones’ Finn Jones to play the Iron Fist. (Tan made into the show, but only for one episode.)

Before the show’s release, Jones appealed to fans to give it a chance. He claimed that rather than simply engaging in tropes, Marvel’s Iron Fist would dig deep and inspect them. (Maybe I missed that part?)

Now, the Iron Fist has always been a considered to be a Buddhist character, at least in a tropey kind of way. There’s no doubt that aspect of him remains in the show, which frames its occasional references to Buddhism within the larger picture it paints of a vague, mushy Asian mysticism.

Unfortunately, and perhaps predictably, Rand’s spiritual practice only serves to highlight his foreignness and makes him seem inscrutable (or downright insane) to those around him. This is a character who is happy to spout off about living in a mystical city located outside space and time, or fighting an immortal dragon to gain the power to punch people better. So when we see him meditating and chanting om mani padme hum in a mental ward, it’s no surprise that we see a psychiatrist looking on with the dismissive, knowing glance that only a TV psychiatrist can truly master.

Later, when Danny offers an idiosyncratic take on Buddhism’s Three Refuges before a chowing down on a take-out meal, his companions look on, bewildered at this mysterious behavior. 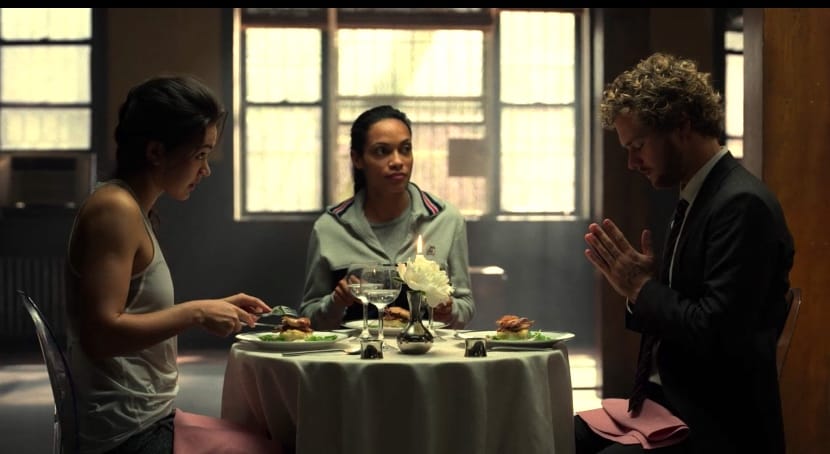 Danny Rand says words of gratitude before eating a meal — as his companions, who apparently have never seen such a thing, look on, mystified. From Marvel’s Iron Fist.

He’s also an adept master of the New Agey one-liner, dropping pseudoscience like “One never knows one’s own true intentions”; or, “The longer I stay in New York, the more I realize the duality in life”; or, as he tells a homeless man in the series’ first episode, “the Buddha said your purpose in life was to find your purpose.” Doesn’t really mean anything, and there’s no evidence the Buddha ever said that, but it sure does sound profound!

Danny does have a personal meditation practice, but for what seem to be purely utilitarian reasons. Just as your phone runs out of power, so too does the power of the Iron Fist. Meditation, when it’s mentioned, is merely Danny’s way to “plug in” and recharge the fist. There’s no contemplation. Just pure and simple: “I need to do A to achieve B.”

Iron Fist’s Buddhists aren’t following any sort of Middle Way; they’re teetering back and forth between two extremes, always on the verge of throwing hissy fits.

Two other ostensibly Buddhist characters in the show use their meditation practice to make better weapons of themselves. Davos, a late arrival from K’un L’un to New York, describes his training as a means of becoming a colder, more objective tool for the protection of the mystical city.

Perhaps because both Danny and Davos really only use meditation techniques to make themselves more lethal, they’re terrible at reigning in their emotions, and always on the verge of throwing violent hissy fits. They’re not following any sort of Middle Way; they’re teetering back and forth between two extremes. Danny can barely make it through thirty seconds of screen time without some sort of near meltdown. (And the only other Buddhists in the show are the ones Danny remembers, like his teacher Yu-Ti, and the monks seen beating him with sticks in a flashback.)

Rather than conservatively replaying the tropes of the past, Marvel’s Iron Fist could have been a real step toward better representation — of Asians and Asian Americans, and even of Buddhists. Instead what we’re left with is a reductive and uneven show filled with a sort of Pan-Asian mystical glop. Sure, its showrunners could insist that K’un L’un exists outside space and time and therefore isn’t part of any single Asian country, but why not create a world we can actually relate to and want to live in?