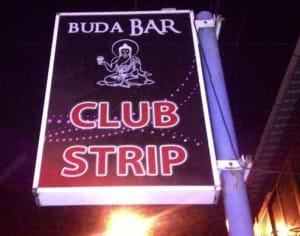 We’ve talked here of “Dharma-Burgers,” which, as I’ve said, aren’t some new fast-food sandwich — though they can be every bit as dubious as a Mc-DLT and a super-sized “New Coke.” A “Dharma-Burger” is, actually, any example of Buddhist ideas or imagery employed in the marketing or production of (usually non-Buddhist) services and consumables. Sometimes they’re okay. Sometimes, they’re beyond the pale. What do you make of this one?

That’s right. It’s the sign for a Portuguese strip club called the Buda Bar. It came to my attention by way of Bruno Fernandes, who knows a thing or two about deftly blending Buddhist thought with modern approaches; Bruno is the vocalist and lyricist for the excellent metal band, The Firstborn, whose lyrical content is very much informed by Bruno’s Buddhist practice. (I’ve covered The Firstborn, who describe their music as “Extreme Metal with Oriental influences and a concept dealing with Buddhist philosophy” a few times before on The Worst Horse and in the Lion’s Roar magazine, too.)

Bruno sent me the above photo with a note: “Recently opened, right next door to our rehearsal room… Talk about karma!” So I asked him if it really is a strip club, and he answered, “That and much more, or so I’m told… I’ve never gone inside so I don’t know if there’s some sort of Buddhist theme in regards to interior design and decoration, but I can assure you the people don’t seem to come out enlightened, only lighter on their wallets!”

Like Bruno, I try to have a sense of humor about these things. Still, I’m left wondering: Why would they do this? It’s not even that it’s offensive — which, to many, it certainly will be — it’s more that there’s nothing “sexy” about this at all. Just who are they trying to attract with this unusual signage?

And how do you react when you see this kind of thing?