Each Friday, we share three topical longreads in our Weekend Reader newsletter. This week, we’re trying something a little different and sharing our new podcast.  Sign up here to receive the Weekend Reader in your inbox. 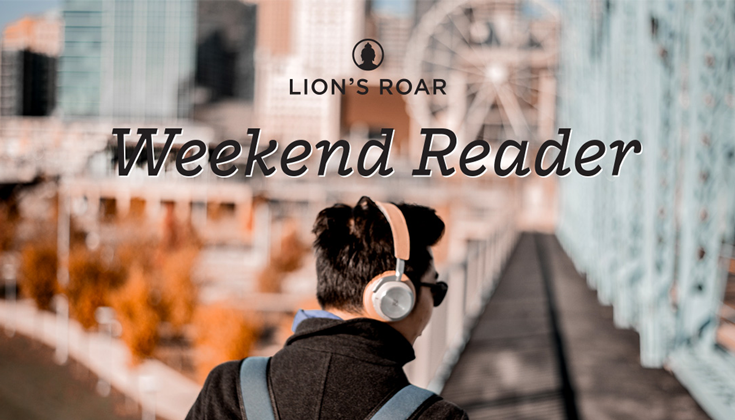 We’re trying something different this weekend. In fact, we’re pretty much leaving reading out of it. Why?

Because we’ve launched a podcast!

The Lion’s Roar Podcast may not be the most out-of-the-box name, but it does indicate what to expect:

Conversations with fascinating Buddhist thinkers, deep (and sometimes playful) dives into Buddhist concepts; timeless Buddhist teachings and stories from the people who bring you Lion’s Roar magazine, Buddhadharma: The Practitioner’s Quarterly, and LionsRoar.com – plus music made by people who, like you, have been rewarded by letting Buddhist wisdom into their lives.

So this week, take a break from reading and just listen.

Subscribe to The Lion’s Roar Podcast on Spotify, iTunes, Stitcher, or your favourite podcast app.

Congressman and former presidential candidate Tim Ryan on his platform, which strongly encourages the adoption of mindfulness as national policy. Koun Franz, Zen priest and deputy editor of Buddhadharma: The Practitioner’s Quarterly, talks about what Zen is — and isn’t. Buddhist teacher and author Sylvia Boorstein tells a folk tale about a terrifying samurai and the abbot who would not flee.

Environmental activist, author, and Buddhist scholar Joanna Macy on “The Work that Reconnects” and how it encourages activism that brings people together. The Venerable Bhikkhu Bodhi gives a United Nations address about confronting climate change. Mark Ovland, longtime practicing Buddhist and activist with Extinction Rebellion, explains why he gave up training as a Buddhist teacher to join the environmental movement full time, at risk of assault and arrest.

With music from her debut album, composer and multi-instrumentalist Nina Keith shares her process of producing experimental classical music with found sounds and rented instruments from her bedroom in Philadelphia. An album that depicts her journey through the past to uncover childhood memories, and what she’s learned from death meditation.