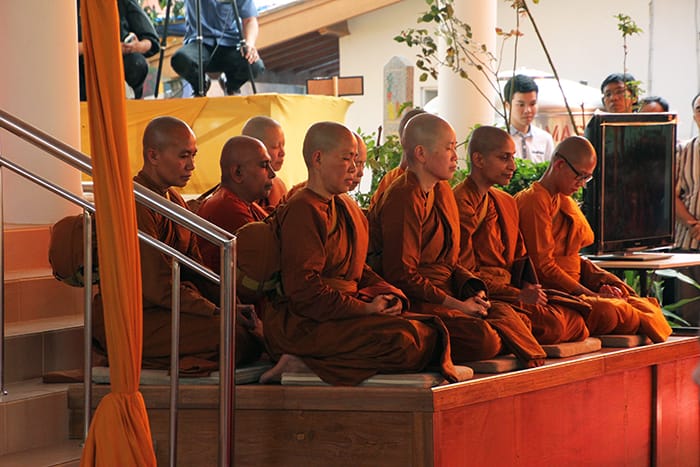 Via Buddhazine.com comes the news that “after being asleep for more than 1000 years, the lineage of Theravada bhikkhunis [fully ordained female monastics] in Indonesia [has] bounced back,” thanks to a ceremony held on Sunday, June 21. Nine prospective bhikkhunis underwent ordination — two from Indonesia and seven from other countries — with 1,500 people in attendance.

From a translated version of Michael Bliss’s original Indonesian report:

The historic ordination was held at Wisma Kusalayani in Lembang, Bandung.

“This is a tremendous honor that Indonesia has hosted the international ordination of samaneris (prospective bhikkhunis) coming from abroad,” said Bhikkhuni Santini, Chair of the Indonesian Theravada Bhikkhuni Association [….]

“Based on historical information, ordination of bhikkhunis in Indonesia has no longer been carried out since more than 1000 years ago,” said Chairman of the Committee Handani Widjaja.

“Ordination of bhikkhunis today will be a historic moment, [accelerating] the spread of Buddhist teachings on Indonesia’s beloved soil.”

Meanwhile [Director General of the Indonesian Ministry of Religious Affairs, Dasikin Buddha] did not deny the existence of several parties in the Buddhist religion who do not approve of the resurrection of the Bhikkhuni Sangha [in Theravada] after it being extinct since the 11th century.

“The Community of Theravada Bhikkhunis in Indonesia is the realization of gender equality in its role maintaining the Buddha Dhamma. Buddha himself has laid a solid foundation for the respect of women’s rights, putting women as individuals who should be honored not only as a samana [bhikkhuni], but also revered as a mother figure,” said Dasikin.

Read the full piece in its translated form here.