“We are grateful that Thay is so clear and engaged with respect to his medical care, which helps us make decisions to support his needs,” Plum Village writes in a new letter to students. 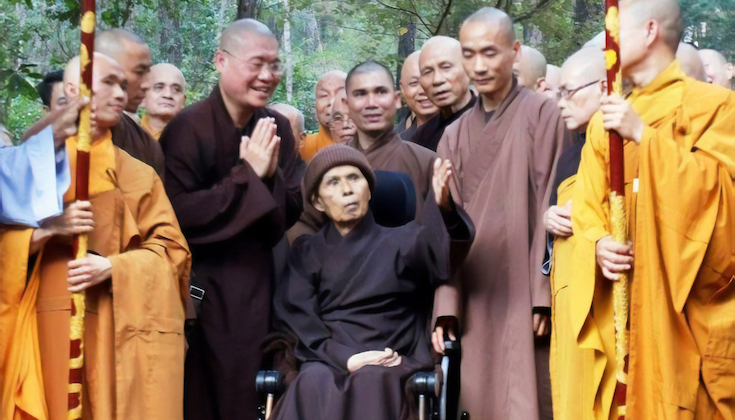 On November 28, Buddhist teacher Thich Nhat Hanh traveled from Huế, Vietnam to Thailand for a medical check-up at a hospital in Bangkok, a letter to his students from Plum Village reports.

The hospital visit involved a full check-up and new set of blood tests, which “went smoothly” and were “very promising,” Plum Village writes. Since he turned 93 on October 11, his health has been “somewhat weaker,” they write, and he caught pneumonia in Vietnam. Nhat Hanh arrived in Thailand accompanied by a doctor, a nurse, and five monastics. Plum Village writes that he spent the most of the flight “contemplating the beautiful landscape below.”

In 2014, Nhat Hanh suffered a brain hemorrhage and was hospitalized in France for four-and-a-half months. He expressed a wish to travel to Thailand in 2016 to be closer to his homeland, and spent nearly two year years at Thai Plum Village. In October 2018, he traveled to Vietnam where had chosen to spend the remainder of his life at Tu Hieu Pagoda, the Buddhist temple where he was ordained at age 16.

Nhat Hanh may choose to stay at Thai Plum Village to support the upcoming ordination of novice monks and nuns in two weeks, but, they write, “We have the impression Thay will want to return to Vietnam soon, where he has been enjoying spending time, and has been eagerly following the renovation of the Từ Hiếu shrine hall.”

“We are learning from Thay’s grace and dignity as he rides the waves of physical fragility,” Plum Village writes. “We are investing all our hearts in nurturing Thay’s spiritual community, continuing his teachings and aspiration in the world.”