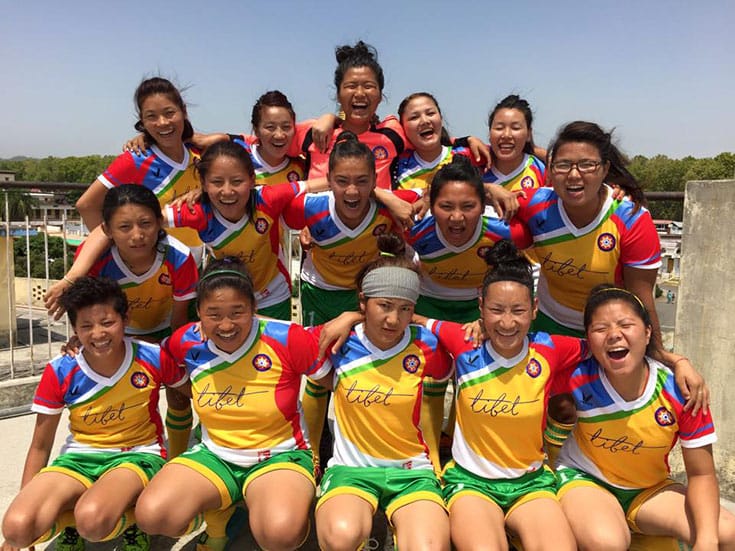 Photo via the Tibet Women’s Soccer team on Facebook.

On February 24, after a year of preparation to attend the Dallas Cup, the Tibet Women’s Soccer team — which was to become the first sports team to represent Tibet on US soil — was denied tourist visas to the United States by the US Embassy in New Delhi, the Tibetan Journal reports.

The team was invited by former English football player Gordon Jago to spend ten days in Texas as VIP guests in attendance to the Dallas Cup, a prestigious boys’ soccer tournament, and to lead the opening-day procession into the stadium.

Cassie Childers, executive director of the Tibet Women’s Soccer team, wrote on the team’s fundraising page that about $5,000, half of the team’s yearly budget, was spent on their rejected visa application process — money that is now “down the drain” with “nothing to show for it.”  The team created a fundraising page titled “The Never Give Up Fund” for anyone who wishes to financially support their journey. (March 1 update: as of today, the fundraising page has reached “125% of [its] $5,000 goal.”)

After filling out visa applications for all 22 players online, Childers took the players to their visa interviews where, she writes, the officer at the US Embassy ignored their supporting documents.

“Everything was filed properly. All the invitations were in order. The conditions were perfect. The girls were asked what position they played on the team, and if they had any relatives in the US. The officer did not even look at their supporting documents. That’s it. Rejected. The only explanation given: ‘You have no good reason to travel to the USA.’”

“If a revolutionary women’s soccer team, the first of their kind for Tibetans, can’t get a tourist visa to attend a very prestigious soccer tournament as VIP, legit guests, then who, may I ask, does deserve a visa?” writes Childers.

The team will still gather for their planned training camp on March 15, and “will arrange some kind of alternative tour for matches, to someplace where Tibetans are welcome.”

“We have decided to never give up,” writes Childers.

The team’s fundraising page, titled “The Never Give Up Fund,” is still operating, collecting funds to support the Tibet Women’s Soccer team.