Tonglen is a meditation practice through which we can connect with suffering and change our relationship with others. In the following piece, Emily Strasser visits with a Tibetan monk in India who’s putting tonglen into practice to help the children in his community. 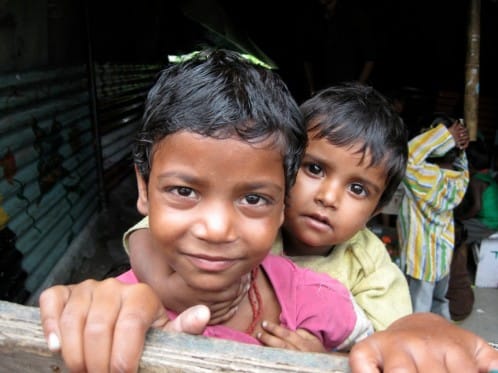 Ten years ago, a young Tibetan monk, Jamyang, sat outside his room in Dharamsala reading about the tonglen practice. The day was sunny, and above him the clouds played in the mountain peaks. From the Tibetan words tong, “to give,” and len, “to take,” tonglen describes a meditation in which the practitioner visualizes breathing in the suffering of the world in the form of thick black smoke, and breathing out his own joy and comfort, as clear and luminous air.

When Jamyang looked up from his reading, he noticed three Indian boys in ragged clothes picking food out of a rotting garbage pile. The next day, Jamyang cooked a large lunch and shared his food with the boys. Over simple daily meals of rice and dal, Jamyang and the boys formed an unlikely friendship.

They took Jamyang down to the Charan slum in Lower Dharamsala, where their families lived in temporary shelters made of bamboo poles covered in plastic sheeting. Jamyang was shocked to see that children without even garbage to eat were dying of malnutrition and diarrhea. The slum had no sanitary facilities. Alcohol abuse, disease, and domestic violence were rife.

Himachal Pradesh, a fertile mountainous state with a growing economy, is home to more than 10,000 internally displaced people, driven from their homes in Rajasthan, Maharashtra, and Uttar Pradesh by environmental degradation and economic changes that have made their previous livelihoods unsustainable. They come to Dharamsala, with its thriving Tibetan exile community and steady stream of tourists, to maintain the winding mountain roads, haul cement for new guesthouses, fix the hiking boots of foreign trekkers, and beg. Many families move seasonally to follow the festival and tourist seasons.

Jamyang immediately began collecting food, medicine, and clothing. He took people to the hospital. Yet he soon realized that addressing the material needs of the people was not sustainable. The Tong-Len Charitable Trust was registered in India in 2005 with the goal of supporting internally displaced people in the region by combating the root causes of poverty, focusing primarily on education for the children.

The local government school is free, but child beggars provide an essential source of income for many families. Children enrolled in school attended only sporadically because their families moved so frequently. In 2005, Tong-Len set up a hostel near the slum to house school-aged children, provide meals, supervision, and academic support. That first year, there were just ten kids. In November 2012, a new hostel building was inaugurated by the Dalai Lama, and Tong-Len now houses about 90 children between the ages of seven and sixteen, divided equally between boys and girls. Jamyang hopes that after the children graduate and find jobs, they will return to help their communities. The four oldest students are in 10th class and will graduate in 2-3 years; they are some of the top students in the state.

The tonglen meditation scares me—I do not want to take the black smoke into my body; I am afraid to give away my own happiness. Stories like Jamyang’s also scare me—when we allow ourselves to really see people and feel true compassion, we may never be able to turn away again.

How much can we afford to let in? Jamyang did not ask himself that question when he shared his lunch with the slum kids that first afternoon. His hair has begun to gray at 37, but his smooth face creases only at the eyes when he smiles. We are sitting in his bare concrete office; the only decorations are a painting of Mother Theresa and a photograph of the Dalai Lama hung above his desk, both draped in kataks, white Tibetan blessing scarves.

I tell Jamyang about my fear of the tonglen meditation. I ask him how he does not become overwhelmed by the endless need he sees around him, by the limits of his ability to relieve that suffering. As I am speaking, Jamyang nods, and punctuates my words with “yeah, yeah, yeah,” as if he has heard all this before.

“The important thing is we have the desire to help all,” he tells me. “We cannot do as we are thinking, but we need to act as much as we can.” But Jamyang does not really want to talk about this—he admits that while he occasionally attends prayers in the Dalai Lama’s temple, he does not meditate. He would rather tell me about his hopes to expand health and educational programs to the more than three-dozen other displaced communities in the region. He has moved from his quiet quarters in Upper Dharamsala to a room near the hostel in Lower Dharamsala. For Jamyang, his work is his prayer and meditation, as constant for him as a breath.

When I visit the girls’ hostel, I am greeted by high, clipped voices, “Good morning Madam.” Small hands lead me to a chair. The girls wear worn but clean clothes, and their hair is oiled and tightly braided. They stand up one-by-one to tell me their names, ages, and “aims”—they want to be doctors, scientists, and engineers. I can’t keep the smile off my face as they show me around their hostel, tugging at my elbows, proudly pointing out their bright clean bunk beds.

The staff of Tong-Len, a mixture of Indians and Tibetans, can tell you how many children, families, and communities they serve. Every year, they must make difficult decisions about which children the hostel can take. What they cannot count are the infinite needs of all those they are unable to help. Neither can they count the immeasurable effect of their compassion. “My aim is astronaut,” says twelve-year-old Poonam, the quietest girl in the room. When I leave the hostel, gently untangling myself from the small fingers and high voices of the children who come from nothing but aim high, I feel lighter.

To donate or learn how to volunteer to the Tong-Len hostel, visit its website.

Emily Strasser has spent time living and studying Buddhism in Dharamsala, India. A writer and traveler, she is rooted for the moment in New York City, where she writes and edits The Pushcart Journal and serves on the editorial board for the PEN America Journal.