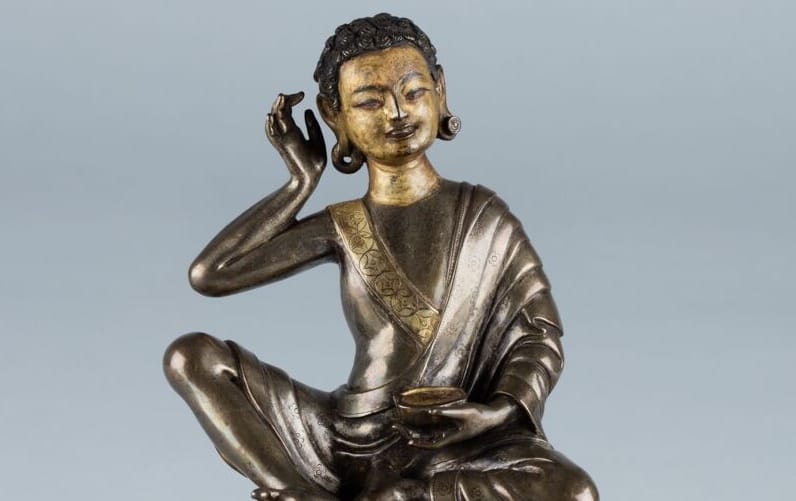 The entrance to the Rubin Museum of Art was alive with sights and sounds as their annual block party, this year called “Sounds of the Street,” welcomed visitors with free admission on Sunday, July 16. Revelers danced to live music, children made crafts, families enjoyed tasty treats, and then, it was through the doors to experience The World Is Sound, the Rubin’s newest exhibit that encourages visitors to “learn to listen with your whole body.”

When I got to the exhibit, housed on the sixth floor, at the top of the museum, I saw visitors giggly from the outdoor festivities suddenly stop, lower their eyes, and begin to intently listen. It was unusual, this experience. A museum visit can often be a hands-off, glass-encased, roped-off glimpse into a past and people that seem so far removed from our current state of being. But not this exhibit.

The first piece I encountered was “Four-Armed Avalokiteshvara in His Pure Realm of Potalika,”—pigment on cloth, and framed in glass. Seemed like a typical “look but don’t touch” experience. However, I saw visitors doing strange things. The piece was featured in a little alcove between two walls (as were a lot of other pieces), like this one: 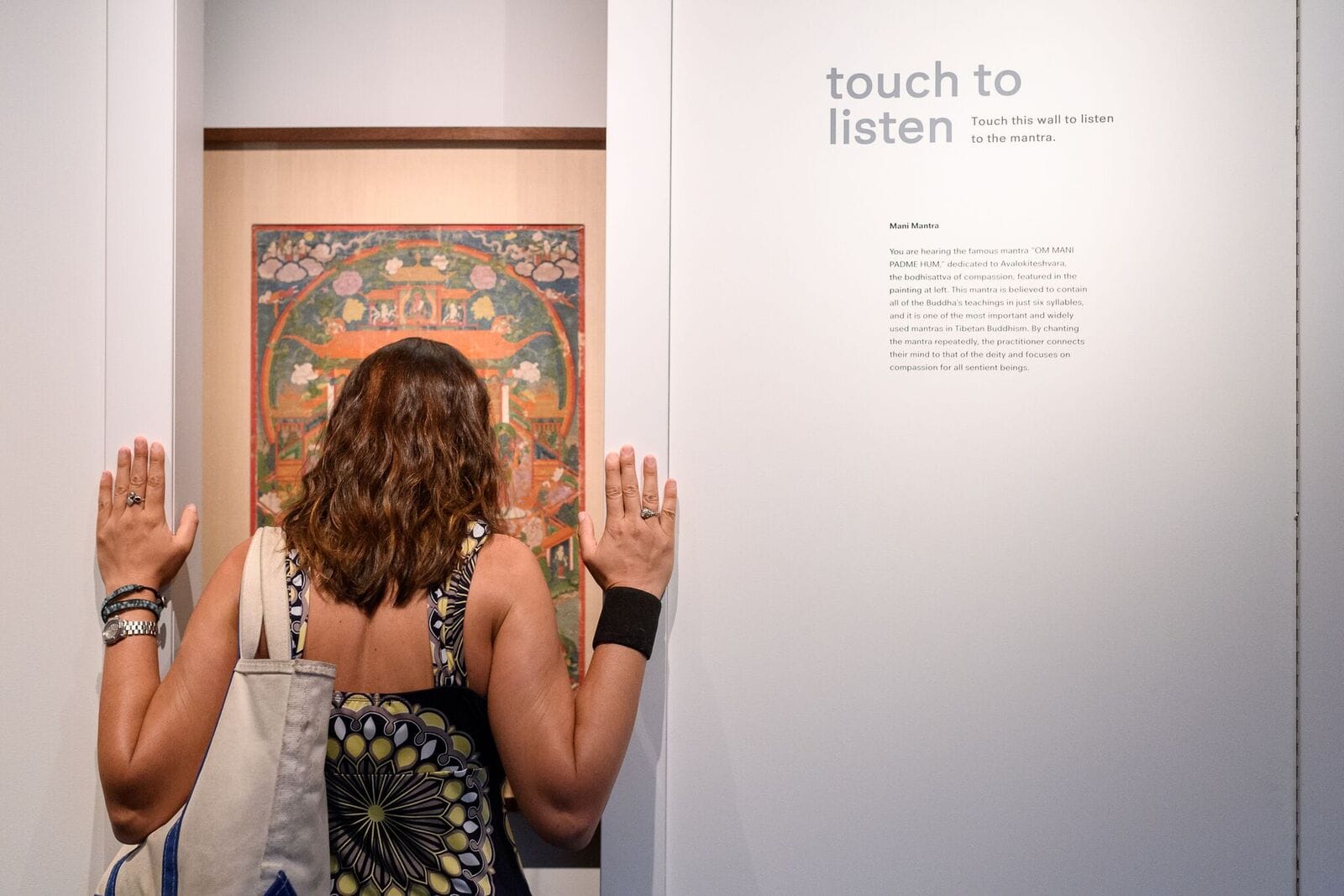 People were walking up to the glass frame and putting their faces close to the piece, standing still, really seeing it. Or so I thought, until it was my turn.

A sign indicated I should “touch the wall to listen to the mantra.” Tentatively, I did, as I leaned in toward the piece. All of a sudden, inside that alcove, the sound of monks chanting filled my ears. And, with my hand on the wall now feeling the vibrations of the sound, it felt like I had put my hand on the heart of some being, who was now chanting for me the meaning of this piece, to make it come alive for me. This tactile experience of the sound was so unexpected I was nearly moved to tears.

The World Is Sound, according to the Rubin’s description, “employs sound in new ways to animate and intensify the experience of art in the Rubin’s collection. Organized cyclically—from creation to death to rebirth—the exhibition explores different dimensions of sound and listening and its many functions in Tibetan Buddhism. Featuring work by more than 20 artists, The World Is Sound juxtaposes new site-specific commissions and works by prominent contemporary sound artists with historical objects from the museum’s collection of Tibetan Buddhist art to encourage reflection on how we listen and to challenge entrenched ways of thinking.”

The showstopper was the “leg bone trumpet.”

A row of headphones attached to a wall allowed visitors to hear creations by sound artists. A long bench in a white-walled room invited visitors to lie down to listen to a translated Tibetan funerary text, which could only be heard once you were fully lying down: 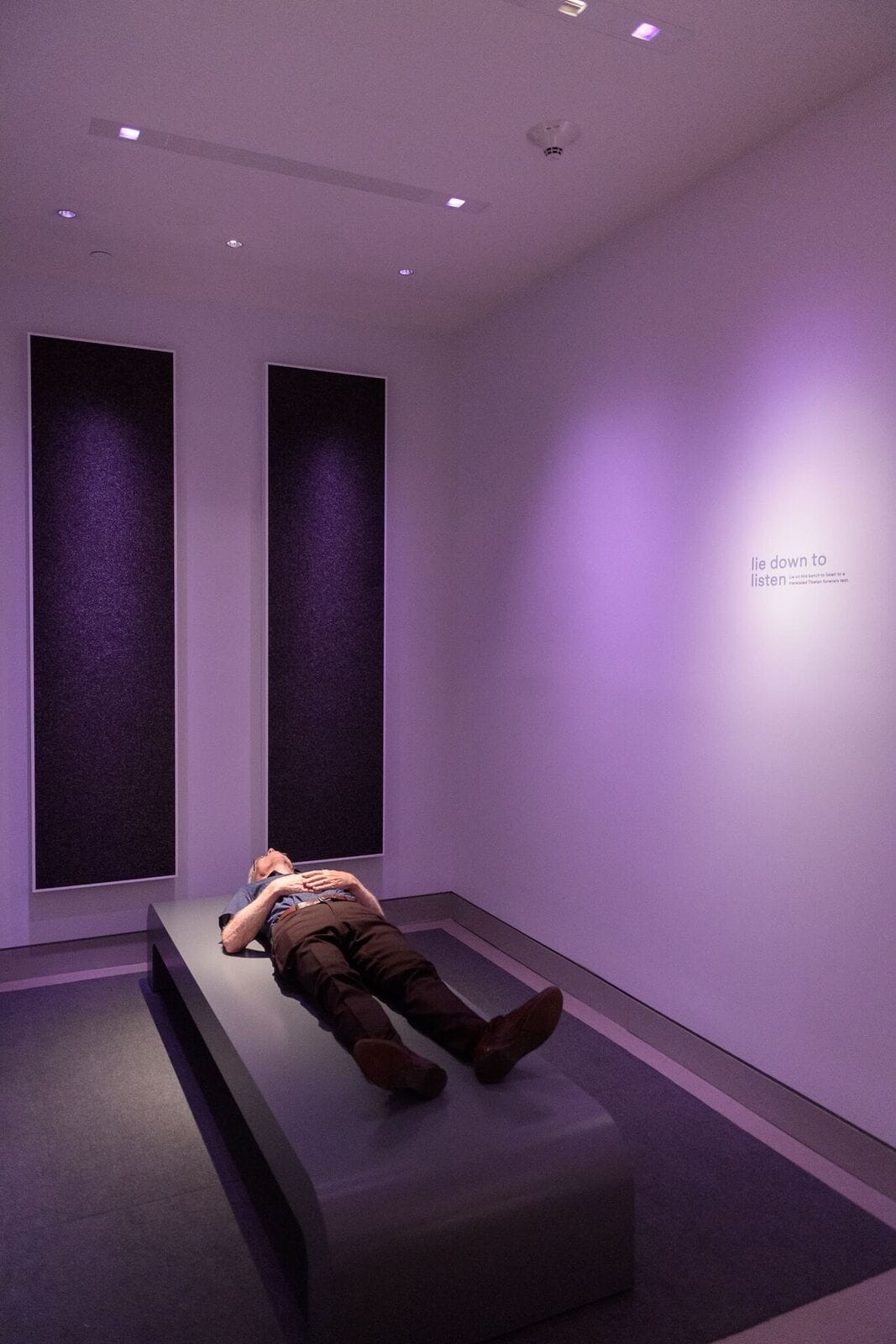 A glass case of ritual text with musical notation suddenly came alive with sound as you stepped up to it. And one of the most popular experiences, on the day I visited, was a display wall of glassed-in musical instruments, which looked like a typical museum exhibit. Except when you approached each, suddenly, you heard the sound of it being played: 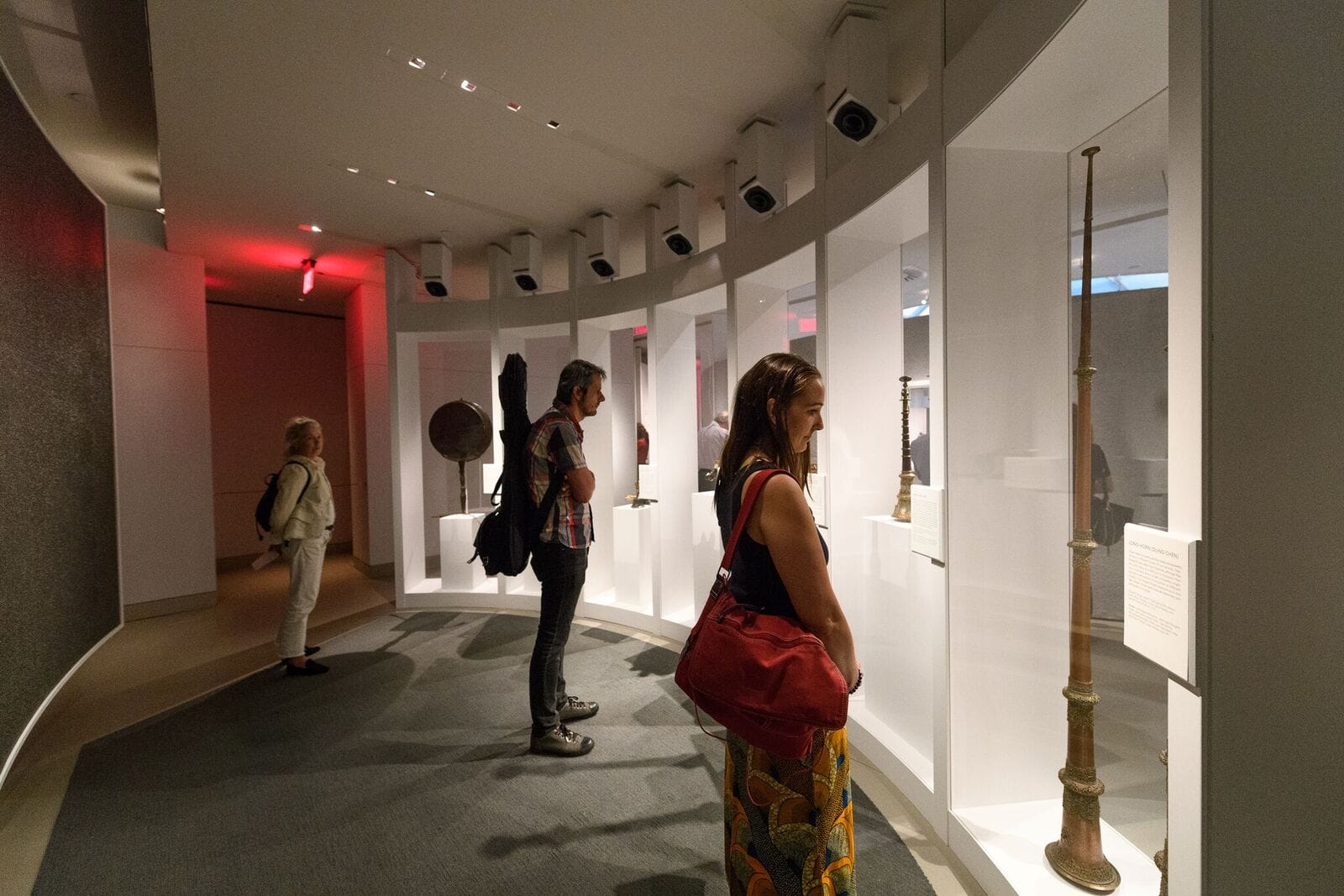 The showstopper was the “leg bone trumpet (kang ling),” associated with the Buddhist concept of impermanence, as it is made from a human leg bone retrieved from a Tibetan sky burial. Played as a musical instrument, it elicited a hushed “wow” from myself and the lady next to me. We just stopped, and listened, and looked at each other.

It was then I realized “looking” is often a private experience, but “listening” is often shared, even with strangers, as you try to grapple with the juxtaposition of life outside dancing on the street and a sound that immediately places death in front of you to remind you that this moment is just that—only a moment.