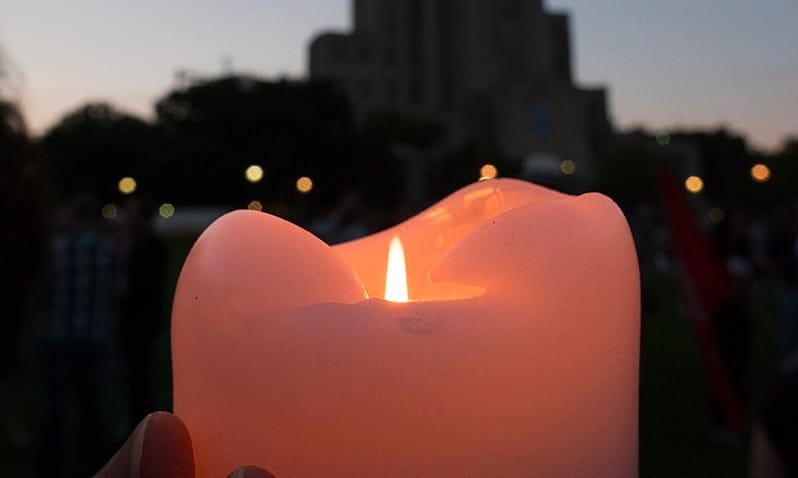 From an August 13th gathering at Pittsburgh’s Schenley Plaza, in recognition of Charlottesville’s dead and injured and against hate, bigotry, and white supremacy. Photo by Mark Dixon. Via Creative Commons license.

In spite of the conflict and pain that our national discourse on white supremacy has surfaced, Buddhist teacher Jack Kornfield is still hopeful — for we all have the tools to begin making real change happen.

Like many, I am heartbroken with sadness over the events in Charlottesville, Virginia, and the rising wave of hate and violence in our culture. While this is part of a long painful history, I want to understand the current tide of white nationalism and racism so the fear and anger it promotes does not take over my own heart. For with understanding I can respond with courage, wisdom and compassion for the benefit of all.

In the breakup of Yugoslavia, after the fall of the communist government, hatemongers took over many radio stations and local media. In this insecure time, fearing uncertainty, loss of power or privilege, politicians and others promoted stories about “them”—the dangerous others. Fearful stories were spread about the past and how the “other”—the Serbs, the Bosnians, the Croats, the Muslims, or the Christians—were dangerous: They will take your job, your houses, your women and children, your lives. And thus a civil war between these groups and their new states was ignited that killed and destroyed hundreds of thousands.

Fortunately, we possess capacities beyond our reptilian brains—capacities of wisdom, love, connection and understanding that can override our primitive and easily provoked fears.

It is not hard to stoke fears in a time of change. Our brains are wired to first scan for danger, and it is easy to trigger the amygdala and the primitive response of fear. It is always pointed to the dangerous “other”—the communists, the blacks, the Asians, the gays, the Muslims, the Jews, the Mexicans, the immigrants.

Fortunately, we human beings possess other capacities beyond our reptilian brains—capacities of wisdom, love, connection and understanding that can override our primitive and easily provoked fears. This is one the great gifts of our meditations and dharma practice. It gives us straightforward and powerful trainings to balance our mind and open our hearts amidst all difficulties, using mindfulness, loving-kindness, equanimity and compassion.

The dharma also points to timeless truths and reminds us of the best of human possibilities. I remember my friend and teacher Maha Ghosananda, the Gandhi of Cambodia, chanting this Buddhist verse to thousands of traumatized refugees in UN camps, fleeing the terrors of genocide:

Hatred never ceases by hatred but by love alone is healed. This is the ancient and eternal law.

In his chant and his years of work leading refugees home with this same chant of love across the jungles and killing fields, he showed the Cambodians another way to live.

We need another way to live now.

In many ways, we Americans are still fighting the Civil War. It was not so long ago. My great-grandparents, several of whom I knew well, fled the pogroms of Russia to come to the United States in the 1880s and 1890s. This was only 20 years after the end of the Civil War.

2019 will mark 400 years since the first of millions of African slaves were brought to Jamestown, Virginia, in 1619. On June 19, 1865, General Grainger freed the last slaves in the United States across the state of Texas. At that time there were 250,000 slaves in Texas alone—more than a third of the population was enslaved! And since that time, the years have been marked by lynchings, apartheid/segregation, racism, economic and social oppression, and a modern prison system that perpetuates another form of enslavement in spite of Lincoln’s great victory.

Our denial of the pain and exploitation in our history feeds the distorted and toxic myths of exceptionalism and white supremacy.

This story is a huge and agonizing part of our national history, about which we are still mostly in denial. We are also in denial about the deliberate genocide of Native Americans across this continent. Native Americans were also enslaved at times, but mostly slaughtered by the millions. Native lands and children were stolen and Native cultures systematically destroyed—all in the name of white expansion and white superiority, white economics.

Unfortunately as a nation, we have not genuinely come to terms with our past. And it haunts us. It haunts us through our fears and our guilt and our insecurity. It haunts us whenever there are times of national challenges and uncertainty. Our fears are activated and the most primitive forces among us are empowered and unleashed. Our denial of the pain and exploitation in our history feeds the distorted and toxic myths of exceptionalism and white supremacy.

There is another way. It is based on the movement of Restorative Justice. South Africa provides a model. With the inspiration of elders like Nobel laureate Archbishop Desmond Tutu, the South African Truth and Reconciliation Commission panels were set up across the country for the nation to watch. The mandate of the commission was to bear witness to, record, and, in some cases, grant amnesty to the perpetrators of crimes and human rights violations, as well as foster reparation and rehabilitation. The panels confirmed what had happened during the apartheid regime, bringing out the painful truth. And in doing so they began to lead the nation from trauma and polarization to a greater collective understanding of the suffering they had passed through. While there is still much healing needed in South Africa, the Truth and Reconciliation Councils promoted a national soul-searching honesty, and started the basis for genuine reconciliation.

Truth and reconciliation first begin in ourselves. In these polarized and deeply troubled times, we are called upon to deepen our own practice of steadiness, courage, mindfulness and love. It is at just these times that we must become the steady hearts the society needs, the ones who remember who are, who are unafraid to tell the truth and who do so embodying the human possibility of compassion, understanding and reconciliation.

Quieting your mind, opening your heart with loving awareness, these are the critical steps to begin. For without doing so, you will only add to the chaos and fear. You must bear witness to your own measure of fears and pain, and honorably see and feel your place in our shared, troubled history. With a wise and caring heart you can understand the systems of privilege and oppression and your own place in them.

And then, like the bodhisattva who hears the cries of the world, you can rise up from your seat of mindfulness and compassion and extend your good hands to touch and mend the sorrows around you. Trust your good hearts. You know how to do this. You have been training for times like this over many years.

This has been explored in over 30 countries, and in small ways has already begun in the United States. There is a Truth and Reconciliation process in Greensborough, N.C. And this article by Fania Davis is a call written last year for such a commission in Ferguson, Mo.

Since ancient times, Buddhist councils of elders have incorporated elements of a Truth and Reconciliation process in their communities. We can do this in many places.

Now is the time for us to do so in our own troubled land. Perhaps this article will spark your imagination. Or inspire you to start a Truth and Reconciliation group in your community. Or simply remind you that we humans have lived through troubled times before, and that there are ways to steady our hearts and move courageously and compassionately through them.

In spite of the surfacing of so much conflict and pain, I am still hopeful.

There is a magnificence to the human spirit as well as a dangerous and destructive side. Difficult times can ennoble us, and call forth new levels of dedication and care for our lives, our families, our communities, and this precious globe.

And for those creating suffering at every level,  I send metta which includes you as well….

May all beings be safe and protected.

[This piece was adapted, with permission, from an article posted on JackKornfield.com.]