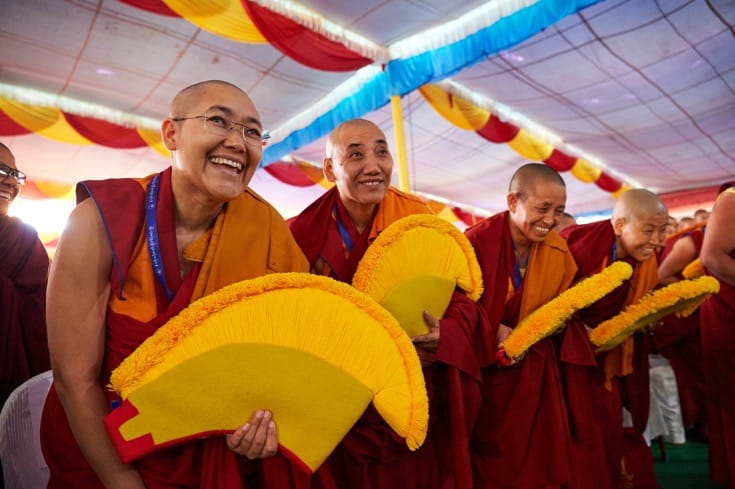 A handful of the twenty nuns smile while waiting to be awarded their geshema degrees.

Early in the morning, on the 22nd of December, in Mundgod, India, many monks, nuns, geshes and lay people gathered in profound silence at Drepung Monastery for a historic event. Twenty nuns from the Gelugpa school of Buddhism, from five different nunneries in India and Nepal, received their geshema degrees from the hands of the Dalai Lama himself. 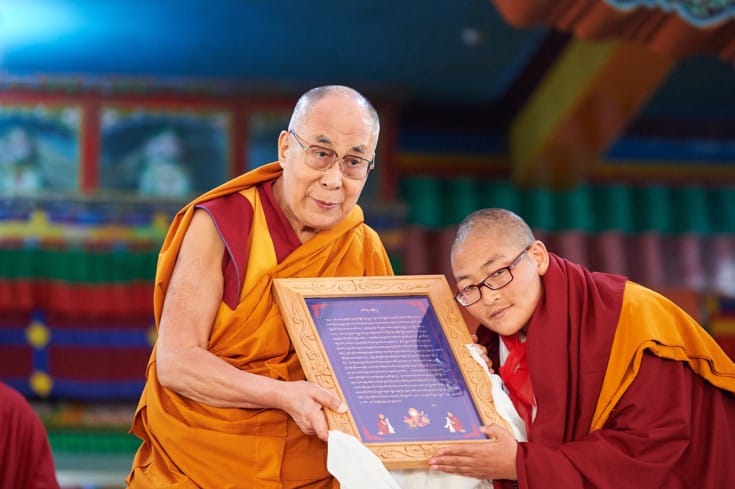 Namdol Phuntsok, who graduated at the top of the class, presents the Dalai Lama with a framed and illustrated copy of a recitation of gratitude.

In Tibetan Buddhism, the geshema degree is the equivalent of a PhD in Buddhist philosophy, confirming seventeen years of arduous studies and four years of examinations. Until this ceremony, only monks could receive a geshema degree. 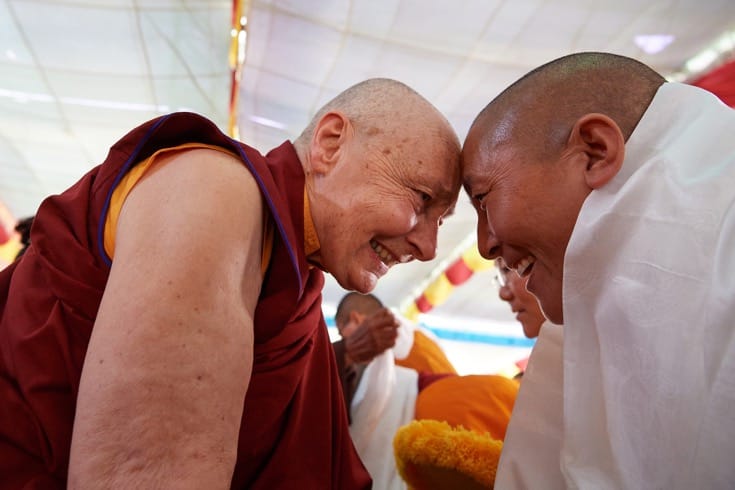 Jetsunma Tenzin Palmo congratulates one of the first geshemas.

The joy and emotion were palpable on stage and in the audience. The challenge of achieving a geshema degree is huge. As doctors of philosophy, the nuns will now be expected to teach, a role reserved only for men until this point. 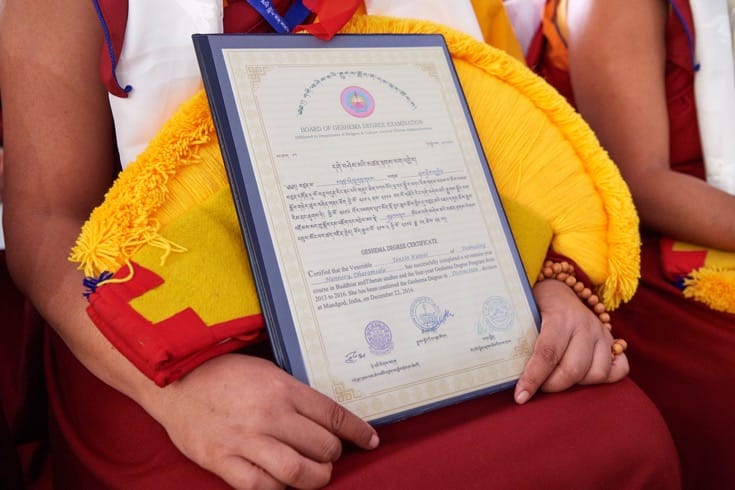 A nun holding her geshema certificate.

The nuns arrived shyly on stage holding their yellow geshema hats tight against their hearts. Namdol Phuntsok, who graduated at the top of the class, paid homage to the Dalai Lama for “his vision and his aspiration that have made it possible to reach such a degree of studies.” 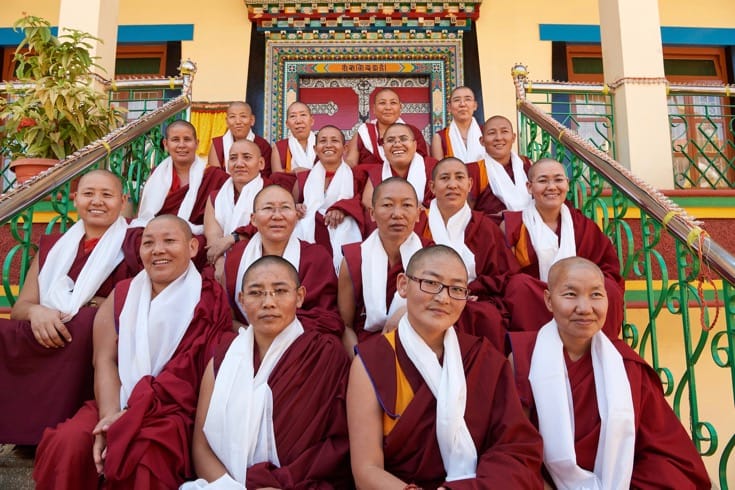 Eighteen nuns from the graduating class sitting outside Jangchub Choeling Nunnery, a nunnery in Mundgod that is renowned for its education and is home to five of the graduating nuns.

His Holiness exhorted the geshemas to continue their studies so they can share their knowledge with those who need it, ensuring the diffusion and understanding of precious Buddhist teachings. He also explained how his forty-year support for the nuns’ cause goes beyond concern for teachings: “With access to education, women can now become leaders. Today’s world needs love and compassion. That is why I call women who are naturally connected to the power of maternal love to play a more active role in the world. And if they are educated, they will be even more able to do so.” 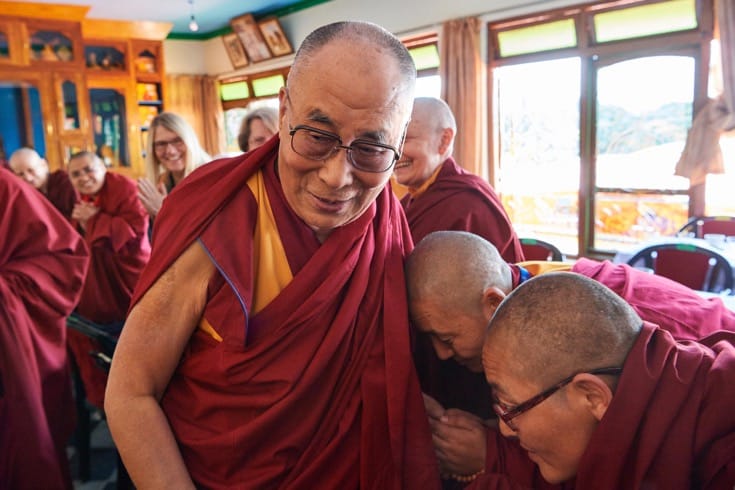 Two geshemas pay respect to the Dalai Lama after the convocation ceremony.

Meet some of the geshemas

After their degrees, all of the geshemas are thinking of ways to make their degrees meaningful. They told me that they need time to make the right decision. Here are the plans some of them are considering: 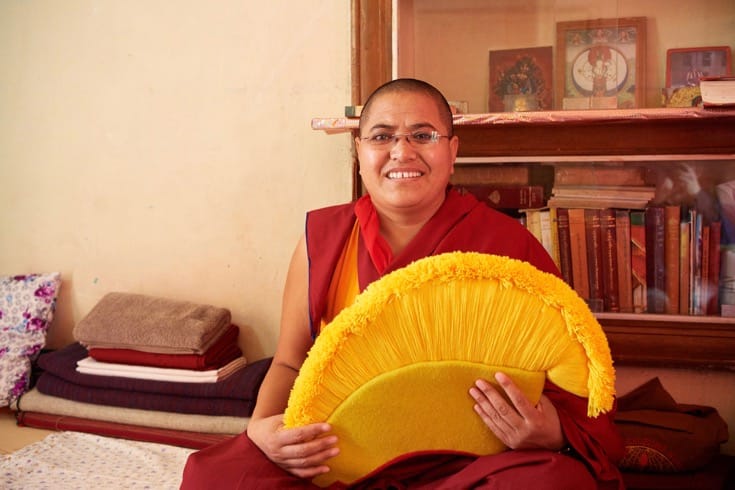 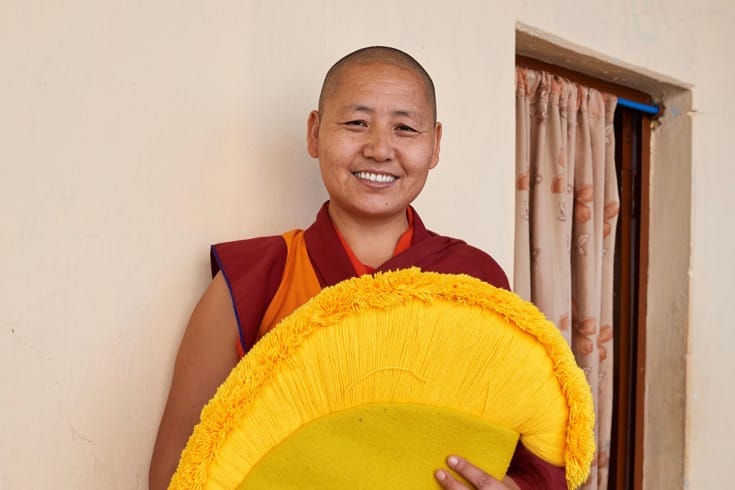 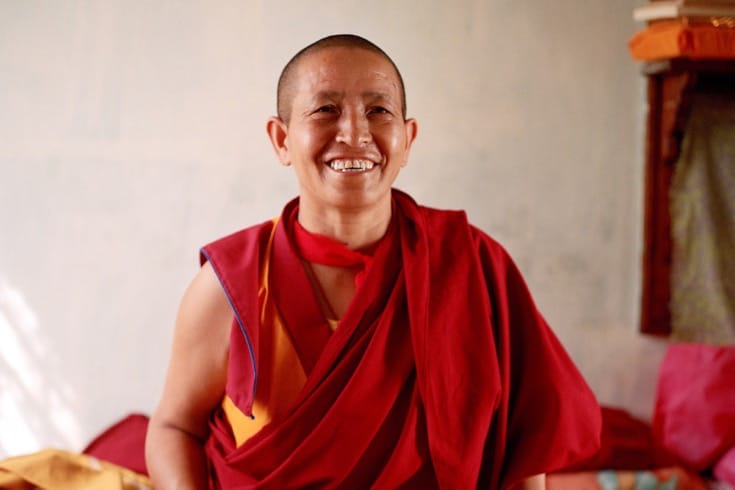 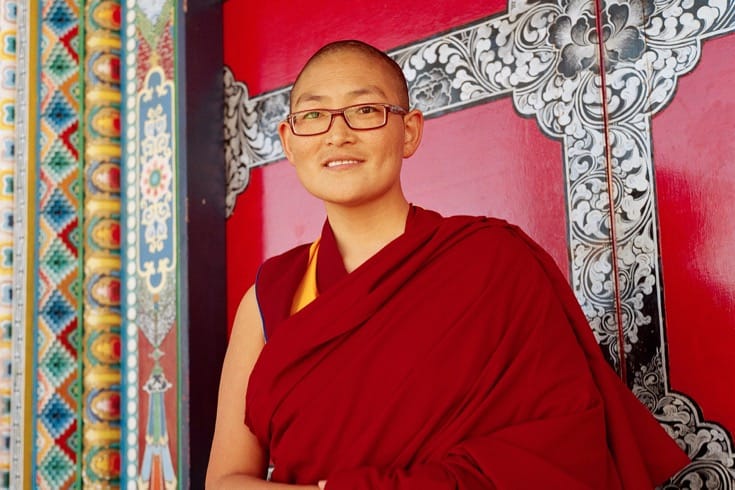 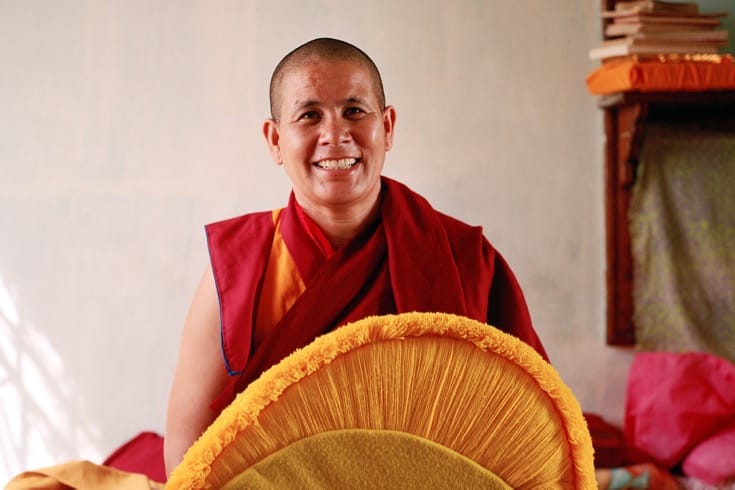 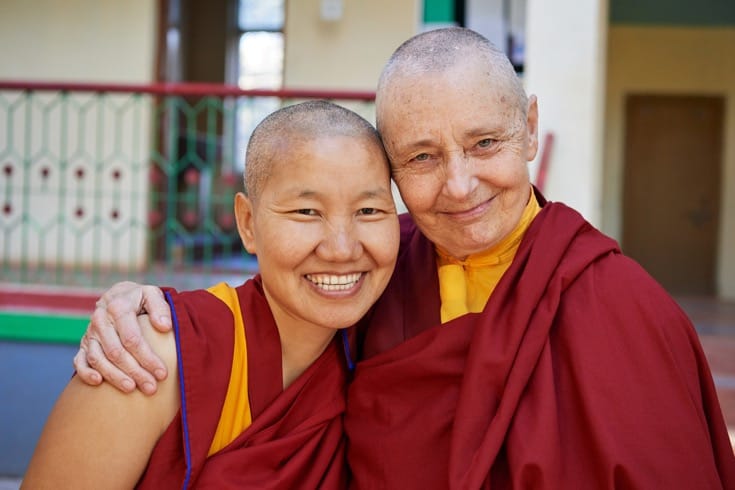 <
►
>
Tenzin Zangmo is from Kinnaur. She has been a nun in Jamyang Choeling for almost 30 years. She went to study Tibetan language in Dharamsala in order to better understand Buddhist texts, following the advice of the Dalai Lama.

Dominique Butet was born in 1968. She studied geography and became a teacher, first in France and then in Morocco, where she got a taste of other cultures. After meeting the photographer Olivier Adam in 2010, she discovered Buddhism through the visit of several nunneries around Dharamsala, in North India. She joined his project and together they worked to document the daily life and the stories of the nuns by interviewing those who fled from Tibet to India. Then they decided to extend the project to nuns across the Himalayas. Daughters of Buddha, their series on the Buddhist female universe. Between 2012 and 2016, Dominique and Olivier explored the nunneries of Zanskar, Nepal, Spiti and Bhutan. Dominique is a writer for French magazines as Sagesses Bouddhistes le Mag and Ultreïa, she is also contributor for Buddhist Door Global, Tricycle and Lion’s Roar. She’s the co-author of a book of meditation for young children.

Olivier Adam was born in 1969. He is a physicist, graduated from the Ecole Normale Supérieure in Paris, but through the years he has turned to being a photographer. He is now a freelance photographer and a teacher at the photography school in Paris. For several years now he has been studying Tibetan culture and Buddhism, specially attending the Kalachakra classes, taught by His Holiness the Dalai Lama all over the world. He belongs to a humanist tradition and works on personal subjects, mixing both Man and the Sacred. Rituals, women and their universe hold an important place in his photos. He has worked together with Sofia Stril-Rever, Matthieu Ricard and Manuel Bauer on the book Kalachakra : un mandala pour la paix, published in April 2008 by Editions de la Martinière. Since 2008, he has been closely interested in the lives of the Tibetan nuns in exile. He started this work in five nunneries near Dharamsala and he goes further on meeting former political prisoners-nuns who were granted shelter in the western world. Daughters of Buddha, this series on the Buddhist female universe, supplemented by sounds and interviews collected by Dominique Butet, now extends to the nuns from across the Himalayas. Olivier works regularly for His Holiness Dalai Lama Private Office as an official photographer during His Holiness's teachings in Europe.