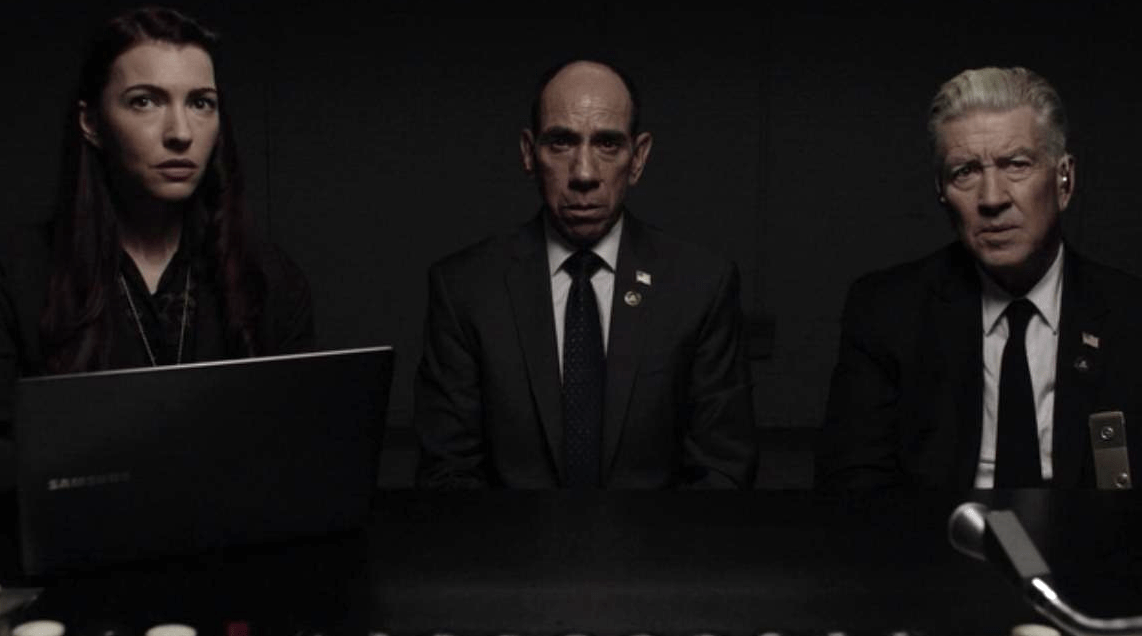 Unpacking the Buddhist reference in episode 14 of Twin Peaks: The Return.

Twin Peaks‘ eccentric, upstanding FBI Special Agent Dale Cooper may well have been on to something when, twenty-five years ago, he tried to employ “deductive technique, Tibetan method, instinct, and luck” in unraveling the mystery of Laura Palmer’s murder. That was way back in the show’s third episode, “Zen, or the Skill to Catch a Killer” (1990). The mysteries in Twin Peaks’ currently running third season (subtitle: The Return) have only multiplied, along with the very existence of Dale Cooper, for it seems there are now two Coopers roaming the earth.

[I’ll stop here to say something that maybe should go without saying, given that last sentence: talking about Twin Peaks is tricky. It won’t make sense if you haven’t been watching, and it might not make sense even if you have, not in any traditional meaning of “sense,” at least. Plus, there’s the problem of spoilers. Well, I’ll do my best.]

This notion of double-Coopers, and doubles in general, again, relates the show to a bit of Buddhist thinking — specifically, a Tibetan word: tulpa.

When FBI Agent Albert Rosenfield (played by the recently departed Miguel Ferrer) imparts to Agent Tammy Preston (Chrysta Bell) where the name for “Blue Rose” cases come from — like “X-Files,” Blue Rose cases are infused with the supernatural and paranormal — he tells her of the first-ever such case, years ago, in which a woman named Lois Duffy manifested in two forms at once. One, Albert tells us, says “I am like the Blue Rose,” is shot, and then vanishes.

The best thing might be to regard all of Twin Peaks as a dream.

Albert asks Tammy to parse the meaning of this use of “blue rose.” It’s “not something found in nature,” she replies. It’s something “conjured … a tulpa.” Albert nods in approval.

Tulpa, nirmita, or thoughtform, is a concept in mysticism of a being or object which is created through spiritual or mental powers. The term comes from Tibetan “emanation” or “manifestation.” Modern practitioners use the term to refer to a type of imaginary friend.

Indeed, just as Lois Duffy’s body (or, rather, one of them) disappeared; so too have we been seeing bodies appear and vanish throughout this series of Twin Peaks. Sometimes, they’ve seemed to come in and out of thin air, materializing in the show’s otherworldly realm known as the Black Lodge. Or, they might manifest in the real world, as Agent Dale Cooper in place of a lookalike named Dougie Jones has, while another, more nefarious emanation of Cooper known as “Mr. C.” roams about on business that is anything but “upstanding.”

All this, we can be sure, is mystical business, with roots in something far older than the first Blue Rose case. (Is it significant, too, that “Twin Peaks” is a translation of Shuang-feng, home for thirty years to the fourth patriarch of Ch’an Buddhism in China? Nahhh….) In recalling and relaying a dream that’s riddled with doubles — and, we gather, clues — FBI Deputy Director Gordon Cole, played by Twin Peaks director David Lynch, quotes an “ancient phrase” from the Upanishads, just as Lynch, an evangelizer for Transcendental Meditation, likes to do: “We are like the dreamer who dreams and then lives in the dream.”

This notion of questioning what is dream and what is reality is one often asked by Buddhists, too: “Regard all dharmas” — that is, phenomena — “as dreams,” goes one of Atisha’s famed mind-training slogans. As for the idea of the thoughtform, it in fact comes to us by way of a Buddhist text — one that Agent Dale Cooper was seemingly able to quote from memory, as Laura Palmer’s father Leland died in Cooper’s arms. Wikipedia, again: “The term ‘thoughtform’ is used as early as 1927 in Evans-Wentz‘ translation of the Tibetan Book of the Dead,” and has its roots in Tibetan Buddhism and Bon. Just who, and what, in the Twin Peaks universe are thought-forms? Just whose body is a “mind-made” body, as a tulpa might be defined?

This being Twin Peaks, such questions may well remain forever unanswered. In the meantime, as we wait and see, the best thing might be to regard it all as a dream. But I’ll leave you with this definition of nirmita, the above-mentioned corollary to tulpa, as rendered in The Princeton Dictionary of Buddhism:

In Sanksrit, “conjured,” referring to something perceived by the sensory organs to be real but that is in fact illusory, like the moon on the surface of a lake or the water in a mirage. The term is often associated in Buddhist literature with the various doubles the Buddha conjures of himself in order to bring varying types of sentient beings to liberation.