The two claimants to the title of “Karmapa” have released a joint statement seeking to heal a decades-long rift in their community. 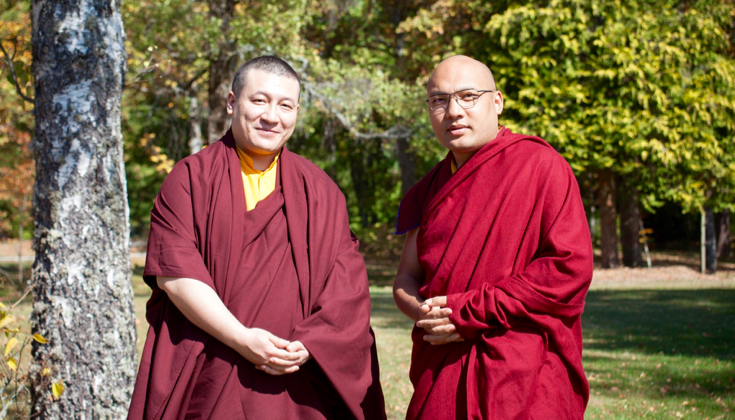 His Holiness Ogyen Trinley Dorje and His Holiness Trinley Thaye Dorje spent the last few days together discussing how they can preserve and strengthen the Karma Kagyu lineage of Tibetan Buddhism. On October 11, the Karmapas released a joint statement after meeting in France to discuss ways to mend the divisions within their lineage.

The Karmapa is the head of the Karma Kagyu, the largest sub-school of the Kagyu, which is one of four major schools of Tibetan Buddhism. When the 16th Karmapa Rangjung Rigpe Dorje died in 1981, two different successors were identified by two separate lineage holders — Ogyen Trinley Dorje by Tai Situ Rinpoche and Trinley Thaye Dorje by Shamar Rinpoche.

Since then, the identity of the 17th Karmapa has been largely disputed. The majority of Tibetan Buddhists recognize Ogyen Trinley Dorje, while an influential minority recognize Trinley Thaye Dorje.

“We ask everyone within the Karma Kagyu community to join us in our efforts to strengthen and preserve our lineage,” the statement reads. “We view it as our collective responsibility to restore harmony to our tradition which is a lineage of wisdom and compassion.”

According to the Karmapas, the main purpose of the meeting was to spend time becoming acquainted with one another, which is something both have wanted for many years. Based on the meeting, they expect to develop a “strong connection.”

Read the full joint statement below:

We are both very pleased to have had this opportunity to meet and get to know each other in a peaceful and relaxed environment. We both had this wish for many years, and we are gratified that this wish has now been fulfilled.

The purpose of our meeting was primarily to spend time together so that we could establish a personal relationship. We were able to talk together freely and to learn about each other for the first time. We were thus able to begin what we expect will develop into a strong connection.

While we were together we also talked about ways that we could work to heal the divisions that have unfortunately developed within our precious Karma Kagyu lineage in recent years. We view it as our duty and responsibility to do whatever we can to bring the lineage together.

This undertaking is critically important for the future of the Karma Kagyu lineage as well as for the future of Tibetan Buddhism and the benefit of all sentient beings. We therefore ask everyone within the Karma Kagyu community to join us in our efforts to strengthen and preserve our lineage. We view it as our collective responsibility to restore harmony to our tradition which is a lineage of wisdom and compassion.