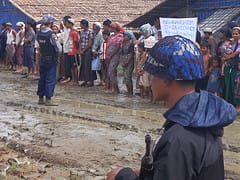 Photo: Bernard Jaspers-Fajer, EU/ECHO. There is a heavy security presence in displaced-persons camps in Rakhine.

Voice of America reports today that two staff members with the United Nations and one United Nations partner have been sentenced to prison terms in Burma for their alleged involvement in the violence between Muslims and Buddhists in the Rakhine state.

Aye Win, a UN spokesperson in Burma, said the sentences were handed down on Friday, although the UN was never notified of the trial and the accused were denied legal counsel. One was found guilty of arson and given a six-year prison term; the other two were convicted of inciting violence and promoting hatred between Muslims and Buddhists, and sentenced to two and three years in prison. All three are natives of Burma, though their identities are not being disclosed.

The United Nations says that twelve local workers were detained in June, six having been released so far; news of these sentences came as a surprise. “Well, obviously [we’re] very disappointed at the outcome of these cases,” Aye Win said. “Especially as we had a very positive development when some of the staffers were released last week. So, we had hoped also that these staffers who were under detention would be given the same consideration.”