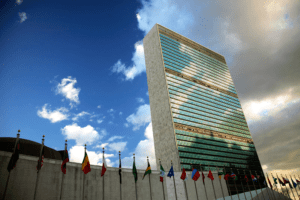 The General Assembly of the United Nations (UN) will hold an International Day of Vesak celebration on Friday, May 20.

Vesak, also known as “Buddha Day,” celebrates the birth, enlightenment, and death of the historical Buddha, born Siddhartha Gautama. Though Buddhists in Asia celebrate Vesak on different days, typically in May or early June, Buddhist communities in New York City have been coming together to celebrate Vesak on the full-moon day of May for the past 30 years.

The Secretary-General of the UN, Ban Ki-moon, posted a message about this year’s celebration on the organization’s website.

In the message, he writes:

At this time of mass population movements, violent conflicts, atrocious human rights abuses and hateful rhetoric aimed at dividing communities, the sacred commemoration of the Day of Vesak offers an invaluable opportunity to reflect on how the teachings of Buddhism can help the international community tackle pressing challenges.

The fundamental equality of all people, the imperative to seek justice, and the interdependence of life and the environment are more than abstract concepts for scholars to debate; they are living guidelines for Buddhists and others navigating the path to a better future.

In February, the Buddhist Council of New York introduced a petition to have Vesak declared an official holiday in New York and across the country. If successful, the petition would make Vesak the first official Buddhist holiday in the United States.

On this Day of Vesak, let us pledge to reach out to bridge differences, foster a sense of belonging, and show compassion on a global scale for the sake of our common future.