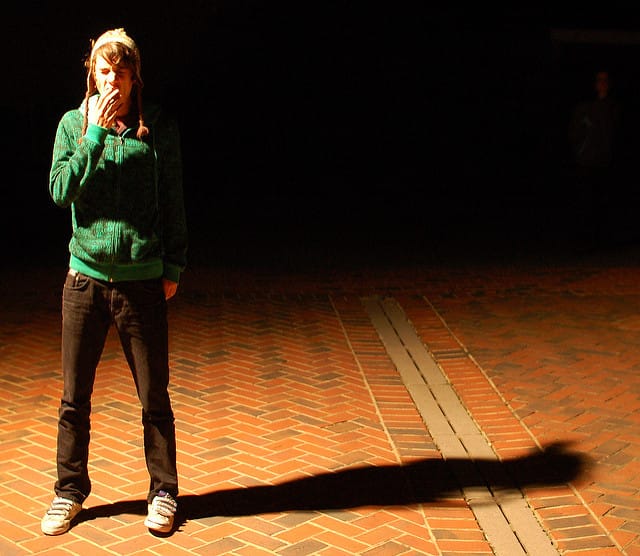 “The biggest problem with sleep loss is that it’s not often recognized as a problem. Those under its influence can be prone to ignore the real source of their problems.”

It’s going to be a long, tough night. It’s one a.m. and my four-year-old son is inexplicably standing on his bed. “Go to sleep!” he yells, pointing at me. Drawing on the depths of my parental wisdom, I counter, “You go to sleep!”  “No!” he bellows.

The next morning I’m low on patience. Connor is behaving like a malevolent, manic imp and presents a clear and present danger to his younger sister. This is one of those times when my medical knowledge is pointedly unhelpful. Knowing that sleep deprivation has raised my blood sugar and blood pressure levels higher than normal just adds to my aggravation. To top it off, the flagship of stress hormones, cortisol, is running amok through my veins, putting my body on yellow alert for the day.

It’s also scant comfort to know that I’m not alone in my misery. On any given day, one in every seven people experiences serious daytime drowsiness that interferes with their quality of life, and in some professions, that ratio is undoubtedly much higher. Poor sleep habits and tiredness are epidemic in today’s brightly-lit, busy, time-pressured environment. We now average one and a half hours less sleep than we did a century ago, yet we need the sleep no less than our forebears. One in ten of us has long-standing, serious sleep problems and lots of the rest of us are just plain sleepy much of the time.

Sleep deprivation and fatigue are major causes of errors and accidents in our society. Sleep experts love to cite the contribution of fatigue to well-known disasters such as the Exxon Valdez, the space shuttle Challenger, Three Mile Island and Chernobyl. Every year traffic accidents temporarily increase following the switch to daylight saving time, when people in affected regions lose just one hour of sleep, so even a modest amount of sleep loss affects the next day’s performance. Research has shown that driving low on sleep can be equivalent to driving under the influence of alcohol. If you’re deprived, don’t drive.

Insomnia-which doctors define as dissatisfaction with the quantity, quality or timing of sleep for at least one month-is a common complaint and is strongly associated with poor health. People who consistently sleep less than six or seven hours a night have a higher death rate than those who get adequate sleep, and that’s generally not because they already have a serious medical condition that interferes with sleep. Poor sleep habits eventually increase the chances of developing heart, lung or kidney disease and also impair immune function, leaving us more likely to suffer colds and flu. Individuals who report insomnia lasting for one year are forty times more likely than normal to develop clinical depression.

So how much sleep do we need? The average amount is seven to eight hours a night, but everyone is different. The key, as with many things, is awareness. Do you feel refreshed most mornings? If the answer is no, you may need more or better-quality sleep. Conversely, if you are sleeping more than nine hours and are still tired, consider getting checked out, as there are also health problems associated with sleeping too much.

If you are chronically tired or sleep-deprived, the obvious solution is to make sleep a priority, which of course is easier said than done. Parents of small children or those whose jobs demand long hours or around-the-clock shifts start with a substantial handicap in terms of flexibility and opportunity to change. Still, it’s usually not impossible to carve out a bit more sleep time. People often come up with creative ways to adapt. One patient of mine who works long hours negotiated with his employer for a telecommute day in the middle of the week. He invests the two hours saved traveling every Wednesday toward sleep and feels far less tired by the end of the work week as a result.

I’m delighted when people come to me with sleep complaints because they are often easily treated. Sadly, many people don’t bring such complaints to their doctor’s attention. Sometimes patients tell me they just can’t sleep even if they have the chance. Typically they are busy, driven folks who may just want the quick fix of a sleeping pill. I usually deflect that request gently and first try to rule out any common correctable medical factors that could be contributing to their sleep problem-pain, depression, asthma, obesity, or drug or alcohol abuse. Next I check out their lifestyle habits. Smoking, lack of exercise and stress can all interfere with our natural capacity to sleep well. The same is true for drinking caffeine or alcohol excessively or late in the day.

There are simple common sense suggestions to improve sleep quality that I usually discuss with patients. These include getting up at the same time every day and not napping during the day. I stress the need for quiet time one hour before sleep, during which you should avoid stimulants such as bright lights, TV, or work-related reading. (Everyone asks same question; yes, sex is O.K.) If these strategies don’t work, there are more structured treatments such as relaxation techniques that work well, although they may take a few weeks to show results.

Sleeping pills will prolong sleep by about one hour on average for the rare patient for whom I prescribe them. Sleeping medications have their downside, though. It’s generally recommended that you use them only for temporary relief and stop after two weeks to reduce the chances of becoming dependent on the medication. These drugs also have potential side effects such as morning drowsiness, dizziness and light-headedness. Paradoxically, one of the problems associated with using sleeping pills nightly is that sleep temporarily worsens for a few days when people stop using them.

All said, it usually doesn’t take much to motivate us to improve our sleep habits. We all know how lousy life can be when we are deprived of sleep, and most people have experienced the feeling of vitality and energy that can follow a good night’s sleep. The great thing about making positive changes to your sleep habits is the immediacy of the payoff the next morning.

The biggest problem with sleep loss is that it’s not often recognized as a problem. Those under its influence can be prone to ignore the real source of their problems. Those of us who become converts to the benefits of sleep choose to guard our sleep with the same commitment that some apply to eating right and exercising. My hope is that many more of us will treasure sleep and realize its power. Given the pace and pressure of our world, this may be a while in coming. So for the time being, we can just dream of the day when everyone is walking around under the influence of a good night’s rest.

Chris Stewart-Patterson, M.D. is assistant professor of medicine at the University of British Columbia and works as an emergency department physician at an inner city hospital in Vancouver.