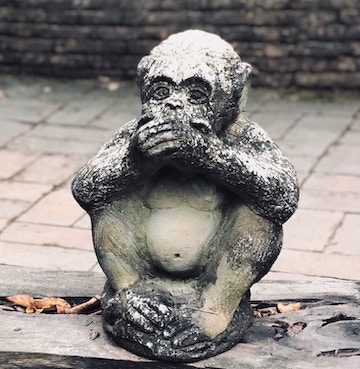 Photo by Joao Tzanno on Unsplash

Sumi Loundon Kim’s New Year’s Resolution for 2018 was to stop swearing. Here’s how it went.

I don’t normally make New Year’s resolutions, but in early 2018 I resolved to stop swearing. Three factors formed this new intention. First, shortly after the 2016 United States presidential election, there appeared to be an uptick of profanity in news articles, book titles, and restaurant conversations. This included the dharma world, where I read and heard more swearing than in years past. I was keenly aware of this linguistic shift because I have two children who—upon entering their tween and teen years—are experimenting with whether, when, and how to deploy these special words. Their flirtations with the f-bomb led to the second reason for my resolution: I decided I didn’t like hearing them curse. Therefore, I myself would have to set a better example.

The third motivation came in January 2018 when Trump referred to Haiti and African nations as “shithole countries.” This was the crap icing on the curse cake of the previous year: Throughout 2017, Trump and others in his administration publicly used expletives at considerably higher rates than in the past. I felt ashamed that the leader of my country not only denigrated an entire continent of people but used immensely crass language to do so. I began reflecting on the role of swearing in my own public roles as a Buddhist teacher.

I began reflecting on the role of swearing in my own public roles as a Buddhist teacher.

I spent several months observing when and why I swore. I discovered that most often a distressed state of mind or emotion preceded the obscenity. Scrolling through news headlines on the latest cruel consequences of a policy or court ruling, I would mutter to my screen, “That’s fuckin’ nuts.” If I was swearing, it was because I was triggered. I wondered if everyday Americans, journalists, and dharma teachers were likewise cursing because they too were inflamed or even feeling retraumatized by threats from a powerful government. With swearing as a symptom of stress, I realized I needed to address the underlying conditions. I began mediating my news intake, regulating and soothing my nervous symptom, intentionally generating kindness in my communities, and thinking about what compassionate action would be most effective.

Conversely, I noticed that swearing could also generate unwholesome states of mind. For example, I might have a mildly averse reaction to someone, but if I started cursing about that person I became more intensely negative about them. If I started thinking of someone in the news as a “fucking idiot,” then I lost a connection to their complexity and humanity. If I characterized someone as an asshole, that left little room to find common ground to resolve conflict. If I believed that I had had a “shitty day,” I was less able to see difficulty as a learning opportunity. I concluded that there was a strong and clear relationship between states of mind and cursing.

In the months that followed, I set about changing what I said. I began by simply editing expletive-laden thoughts into NPR-acceptable sentences. A wonderful thing happened: even if the thought was very harsh, actually speaking a revised sentence out loud changed how I felt. For example, if I thought, “Why the hell didn’t you pick up this shit?” but I said, “Please bring your dirty dishes to the kitchen. You’ll lose 20 minutes of Fortnite time if I see this again,” then I actually felt calmer and gentler.

After a year of exploring the power of profanities, I’ve come to respect their potency.

However, sometimes I just really, really wanted to cuss. In such instances, I used milder substitutes such as “WTF?” or “What the fork?”  However, since for me mind states and word use are inextricably linked, it became clear that even swear word swaps still instigated aversion, judgment, and ill will. I gradually stopped using even these substitutes. Toward the end of 2018, I was relatively curse-free – not perfect, but leagues better than where I started. I didn’t expect it, but I actually felt better about myself.

This brings me to my dharma role. I’m not unfamiliar with obscenities in Buddhist teachings. I was raised in the Zen tradition, in which an occasional profanity was used as a tool to cut through sanctimony and pretension. Notably, such one-off deployment of an obscenity was effective because it was rarely used. However, after a year of exploring the power of profanities, I’ve come to respect their potency on affecting and reflecting my state of mind. Perhaps, therefore, my cursing invokes similar feelings for those listening. In the spirit of elevating hearts and minds toward greater kindness, understanding, and gentleness – including my own – winnowing away any remaining cursing tendencies in teaching is my resolution for 2019.