Wayne Shorter is one of jazz’s great geniuses, and at 85 remains an inspired, inspiring workhorse. His new three-disc album — which comes matched with a graphic novel — showcases his innovation, recalls his storied career, and reflects his Buddhist practice. 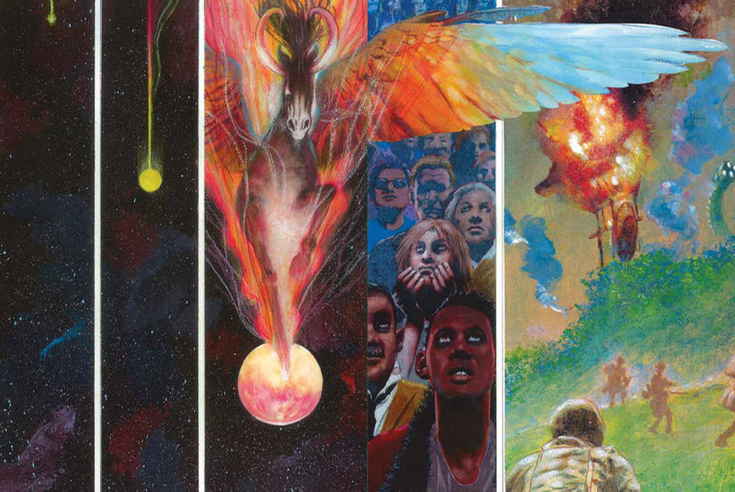 It’s not uncommon for the press, or even friends, to refer to the legendary saxophonist and composer Wayne Shorter as a buddha; he’s been a wise elder of the jazz world for decades now. It would be enough for him just to have played in Art Blakey’s Jazz Messengers, Miles Davis’s Second Great Quintet, or in the fusion supergroup Weather Report. It would be enough just to have recorded landmark solo LPs like Speak No Evil or High Life — much less the other 24 releases in his catalog.

And then there’s his practice of Nichiren Buddhism, which has been ongoing for some 35 years, and of course informs ideas about Shorter as much as it does his relentless artmaking. Given all this, and Shorter’s happiness to talk about big concepts, it’s not hard to imagine that his work as composer and improviser is a manifestation of what some Buddhists refer to as “ big mind” — which, the Zen teacher Shunryu Suzuki said, is in fact “buddha mind.”

“Forward” and “undaunted” are good words for this music.

Now 85, Shorter has just released the monumental Emanon, a three-disc set (no digital edition) matched with a graphic novel written by Shorter and screenwriter Monica Sly — who helped Shorter and his comrade Herbie Hancock compose their “To the Next Generation of Artists” — and illustrated by comics veteran Randy DuBurke.

Comics and jazz make a natural fit for Shorter, who’s been reading comic books since he was a boy growing up in New Jersey. (He even drew one himself, at age 15.) Which isn’t to say that Emanon, the graphic novel, is some golden-age superhero rehash: yes, its eponymous hero (a “rogue philosopher”) fights evil, but across multiverses. And it seems these multiverses, to Shorter’s big mind, may be a way for us to get our minds around the notion of emptiness. (It’s not an easy concept to nutshell, but this passage by Dainin Katagiri Roshi is a fine start: “Most people misunderstand emptiness, thinking it means to destroy, or to ignore, our existence. This is a big mistake. Emptiness is not negative. Emptiness is letting go of fixed ideas you have had in order to go beyond them.”)

Emanon’s third track, “Lotus,” suggests (if only from its title) a Buddhist element as well. Indeed, Shorter has told his biographer Michelle Mercer: “The lotus exists only in the swamp, in our world of turmoil, and the blooming flower purifies the water around it. Within the story, those workings of the lotus are being carried out through Emanon’s actions.”

Shorter notes that the music isn’t a “soundtrack” to the graphic novel, and the graphic novel isn’t some kind of visual telling of the all-instrumental music that makes up the release’s three CDs. Rather, they complement one another. As the composer told the Los Angeles Times, “The graphic novel fits the forward, undaunted stuff that is going on in the music.”

“Forward” and “undaunted” are good words for this music. The first disc features the group with the Orpheus Chamber Orchestra; the other two discs feature the band live in London, revisiting songs from the first disc and from elsewhere in Shorter’s catalog. Highly composed yet allowing for fearless improvisation, the songs here flow out from Shorter and the rest of his accomplished quartet — pianist Danilo Pérez, drummer Brian Blade, bassist John Patitucci — with the naturalness of wind, or rainfall. Lilting and complex, the first disc’s music swells and takes off on a dime, making the most of the presence of the orchestra, and in so doing often creates a distinctly filmic feel that seems especially effective as a graphic-novel companion.

The live, orchestra-less performances on the other two discs are as potent, only with more standard “jazz” instrumentation. Here and there, we hear references to Shorter’s own catalog. (And others’, perhaps, as well: Is that opening, expanded flourish from “Prometheus Unbound” an homage and update to John McLaughlin’s gorgeous Mahavishnu Orchestra track, “Hope”? Certainly, hope is among Emanon, the graphic novel’s, big themes.)

Emanon is out now on Blue Note Records, and is just one factor in what’s looking like a banner year for the jazz giant, which will also include a Kennedy Center Honor and, in 2019, the release of a documentary, Wayne Shorter: Zero Gravity.