Zen teacher Taigen Dan Leighton attended the Tree of Life synagogue while growing up in Pittsburgh. He reflects on how all of us, near and far, are connected to the tragedy. 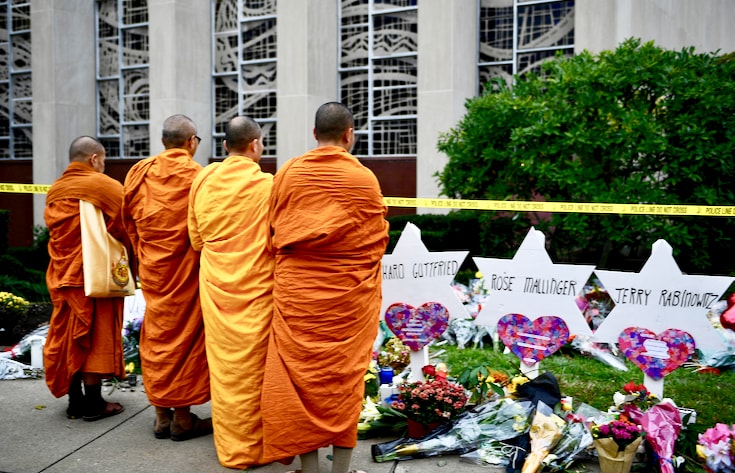 Buddhist monks pay respects at a memorial outside the Tree of Life synangogue, where, on Saturday, an anti-Semetic gunman killed eleven. Photo by Brendan Smialowski/Getty Images.

I want to share my personal connection and response to the shooting on Saturday, October 27th at Tree of Life synagogue in Pittsburgh, where eleven people were killed and six wounded. My Bar Mitzvah was at Tree of Life. It is a few short blocks from where I lived growing up. It was surreal to see the temple where I went to Hebrew and Sunday school on TV with soldiers and SWAT teams massed in front.

I have not lived in Pittsburgh since 1972. I no longer have family there, and I’ve not stayed in regular contact with anyone from Pittsburgh. But I was there a year ago September to enjoy my 50th high school reunion.

All mass shootings are horrible — from Parkland to Sandy Hook to all the terrible shootings every single day on the South Side of Chicago. But somehow a personal connection intensifies the horror.

One of the 11 victims was my high school classmate. We were not close, but I recognized his name. Another victim was a doctor who was an HIV specialist who helped many people.

The shooter at Tree of Life was virulently anti-Semitic and very anti-refugee, explicitly targeting a Jewish group that supports refugees, the Hebrew Immigrant Aid Society. Prior to the shooting, groups at Tree of Life were supporting refugees fleeing violence, including from Central America. A liberal congregation, the rabbi was speaking on gun control.

The person in Florida arrested for sending bombs to former Presidents Obama and Clinton — as well as a dozen other Democratic leaders — was a “nationalist” white supremacist who was anti-black, anti-Semitic, and anti-refugee. Last week, another white man in Kentucky unsuccessfully tried to break into an African-American church and then shot and murdered two black people at a nearby grocery store.

We must work against hatred. And we must work in support of communication and understanding.

Our twisted collective karmas are ancient and intertangled, connecting us to victims of hatred and those manipulated into seeking scapegoats for their fear and suffering. Our great koan is: How can we include all of this with kindness and still speak truth to power with actions that stand strong against hatred and harm?

Refugees from Central America and the Middle East are fleeing war and terrorism instigated and sustained by our own government’s policies. Recent reports say that 12,800 children remain in US detention camps. The policy of separation of children from their families at our southern border continues. How is our refuge in the Buddha connected to the refugees of war, terrorism, and climate change? Somehow, as a dharma refugee, I feel kinship to migrants around the world. As Buddhists, many of us are descended from refugees or immigrants seeking a better life. Some of us are descended from people forced here in slave ships, or are descended from Native Americans, whose ancestors came much, much earlier. We also include immigrant Buddhist communities and can recall how Japanese-Americans were interned during World War II. We take refuge in the Buddha to return home to a deeper interconnectedness and communion and to find refuge from the horrors of the hatred, cruelty, and greed of the conventional world.

When my students take refuge with Soto Zen precepts, I also recommend to them Thich Nhat Hanh’s Order of Interbeing precepts. Especially relevant is the precept not to kill. Thich Nhat Hanh says, “Do not kill. Do not let others kill. Find whatever means possible to protect life and prevent war.” Also relevant is the precept to speak truth. Thich Nhat Hanh says, “Always speak truthfully and constructively. Have the courage to speak out about situations of injustice, even when doing so may threaten your own safety.”

As Dharma refugees, may we strongly speak out and act to support current refugees seeking sanctuary in our country, and work to oppose hatred of all kinds, including from anger arising within us.

Taigen Dan Leighton is the Guiding Dharma Teacher at Ancient Dragon Zen Gate, Chicago and the author of Faces of Compassion: Classic Bodhisattva Archetypes and Their Modern Expression.