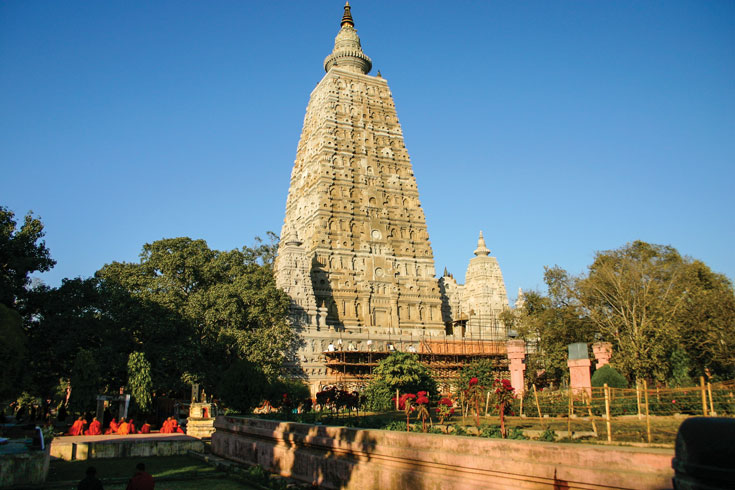 According to tradition, Bodhgaya, a small town in the northern Indian state of Bihar, is where Siddhartha sat under a tree 2,600 years ago and reached enlightenment.

As Buddhism’s most significant pilgrimage site, the place of the Buddha’s awakening has undergone many changes over the millennia. At first it was simply marked by a two-story wooden structure and stone throne. Then, under the leadership of King Ashoka (304 BCE to 232 BCE), a commemorative temple was built. The current temple, the Mahabodhi, was constructed in the sixth century, but has undergone various substantial restorations.

The structure of the Mahabodhi Temple is that of a graceful pyramid rising from a square platform. Inside the temple, there’s a colossal gilded image of the Buddha touching the earth, and outside, on the temple grounds, there’s a large bodhi tree (ficus religiosa), which is said to have been propagated from the one Siddhartha sat under. The Mahabodhi Temple complex is a UNESCO World Heritage Site.

Bodhgaya is also home to many other temples and monasteries that have been constructed by the people of different Buddhist nations, including Sri Lanka, Japan, Tibet, and Thailand. Each of these temples reflects the architectural style and interior design of the nation that built it.

Today, the ambiance of Bodhgaya is a vibrant mix of the spiritual and the touristic. Though pilgrims flock to Bodhgaya year-round, a particularly festive time to visit is for the Buddha Jayanti, often called “the Buddha’s birthday,” which is held on a full moon in April or May. The town celebrates with processions, discourses, symposia, and group meditation and prayers.