The twelve nidanas describe the way we move from lifetime to lifetime in the painful cycle of existence called samsara. By understanding how they work, says Sakyong Mipham Rinpoche, we can change our future karma. 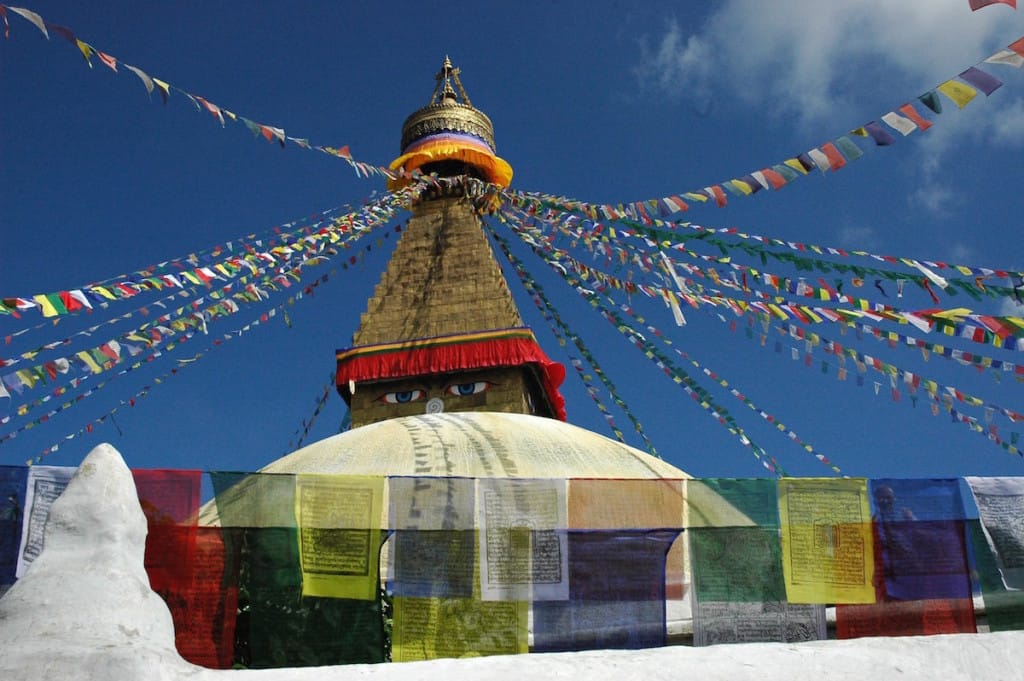 The familiar Tibetan image of the Wheel of Life shows us how samsara, cyclic existence, really works. The wheel of samsara is driven by the three poisons—passion, aggression, and ignorance—which are represented in the center of the circle by the snake, rooster, and pig. On the outside of the wheel are the twelve nidanas, the specific steps by which we move from past lives to this one to the next. When we talk about karma, we are talking about these twelve branches of dependently related arisings, or “cause and result.”

From the Buddhist point of view, there is no outside influence. Things depend upon one another, and they produce a certain cause or result. We usually think of things as having a beginning and an end. However, it’s very hard to point to the beginning or end of anything. Causes are always becoming results, and results are always becoming causes. We look for beginning points because we want to believe in permanence.

The twelve nidanas are a core teaching that explains how karma works and why we practice meditation. The Buddha said all causes and conditions are dependently related: because one thing arises, another arises. In the present, we’re feeling the result of past causes and conditions, and planting karmic seeds that will produce results in the future.

People often say that because karma has already been set in motion, understanding karma won’t make much difference. This would be true if there were only one cause involved, but there are always many causes at play. For example, the birth of a tree takes water, air, sunlight—all kinds of causes and conditions. There are multiple interactions taking place.

The first of the twelve nidanas is ignorance. This coarse level of ignorance has to do with not knowing. Specifically, we don’t know the four noble truths: suffering, the causes of suffering, the cessation of suffering, and the true path. We also don’t know the true nature of what ignorance creates. Therefore we take the five skandhas—form, feeling, formation, discrimination, and consciousness—and falsely identify them as a self. And once there’s a self, there is action.

So the second nidana is formative, or conditioned, action. When we’ve mistaken the five skandhas for a self, action—karma—is created and planted like a seed in the eighth consciousness. The eighth, or store, consciousness is the fathomless basis of everything we experience, the storehouse of karma. Under the right conditions, karmic seeds will grow there, becoming the basis for a lifetime or a universe. Nonvirtuous actions such as anger or laziness sow the seeds for birth in the lower realms, such as the hell realm or the animal realm. Virtuous actions such as generosity or patience are the basis for a rebirth in the human realm or the god realm.

The nidanas are a three-lifetime cycle. The first three nidanas are regarded as Lifetime A, or the previous lifetime. First, there is ignorance. Then all the conditions—virtuous and nonvirtuous—come together as formative action, ready to be impelled into the next lifetime. The third nidana is the consciousness that is going to be impelled. With a few more actions, suddenly this consciousness is born.

That marks the end of Lifetime A and the beginning of Lifetime B, our present life. Causes have come together to impel the consciousness into this lifetime. Essentially, all past virtue has produced the pleasures of this life, and all past nonvirtue has produced the pains. That consciousness has not been resolved, but it will be resolved as we live our life, which will then give birth to Lifetime C. Right now, we are preparing for that. The seeds have been planted. They are being nurtured, becoming more potent.

The first nidana of Lifetime B is the fourth nidana in the cycle: name and form, our mind and body. The consciousness has ripened into a particular body and mind. As a result of karmic conditions, a being is born.

The next nidana is the six sense fields. We have the basis—mind and consciousness—and now sight, hearing, taste, touch, and smell are developed, as well as the mind.

The next nidana is contact. Contact means we have an object, the sense faculty, and consciousness. Contact happens before the level of thought or concept. The world is coming together continuously. Through the senses, the mind freezes the object, like taking a snapshot of what is going on: “That’s rain.” This is contact.

The next nidana is feeling, which also happens before thought. Is this rain pleasurable, painful, or neutral? Contact and feeling are now watering the karmic seed in a particular way.

The next nidana is craving, which is based on feeling. Desiring to avoid pain or to experience pleasure, we continuously water those karmic seeds in the eighth consciousness.

The next nidana is appropriation, possession. While craving can be painful or pleasurable, appropriation is more pleasure-oriented. We revel in our infatuation with pleasure. This is possible with any activity, including meditation. When we’re sowing the seeds for attachment, we are laying the ground for future moments or future lifetimes. In trying to possess something, we’re without a higher view, the view of emptiness.

We have now watered the consciousness in such a way that it is ready to give birth. This is known as existence, the tenth nidana. First there was ignorance; and then formative action, getting everything ready. Now, at the level of existence, everything has come together, and we are on the cusp of producing the next birth. The time before we die is considered an especially potent time in terms of the actual outcome of our life.

After existence, we have birth. The next life, Lifetime C, is born from whatever situation we are in. Our actions have caused us to be born among other people or beings who have similar karma. And what is this birth the basis for? It is the basis for suffering.

The last nidana is aging and death. This is not aging in the sense of getting gray or fat. As soon as we are born, we begin to age. Birth is a painful experience, and between birth and death we experience suffering. Death is the end of that continuum.

Seeing how the twelve nidanas arise dependently is a process of enlightening our own ignorance. Contemplating even one nidana as part of our daily meditation offers a tangible and profound way to see how the mind, the self, and phenomena work. It helps us become aware of habitual tendencies that have affected our actions for a long time, such as thinking that the self is real.

Understanding the nidanas helps us relate with the environment, which is created by a continual play of internal and external interdependencies. When we freeze or fixate, our meditative awareness will encourage us to step back and ask, How am I moving through time and space? How am I affecting my environment, and how is it affecting me? Knowing how our actions create the future, we can choose which karmic seeds to water.