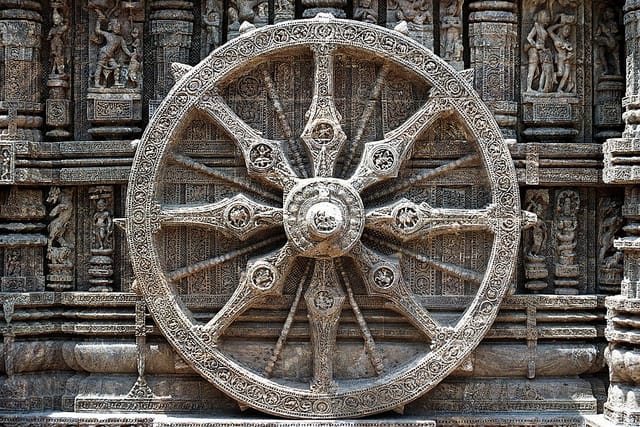 The biggest mistake we can make, according to the Buddha, is to discount or minimize our suffering. Why? Because it is the fiery gate through which we must pass to engage the spiritual path.

]In this respect, literally, there is no getting around it. Ayya Khema, the late Theravadin meditation teacher, reported an incident that occurred early on in her practice in which she experienced a moment of vivid recollection of herself in hell in a completely helpless situation of extreme torment. Weird, very thin, stick-like creatures were repeatedly dipping her in boiling hot tar. As they did so, they were shrieking in high-pitched voices, “This is the way to enlightenment, this is the way to enlightenment.” Yes, intense suffering can be experienced, but what can it possibly have to do with spirituality and enlightenment?

It can be a very distressing realization that while we may be able to eliminate any particular form of pain, we will never be free from suffering as such. It is like trying to scale a steep cliff and suddenly finding out that the cliff goes on forever, without end. Yet this is, according to the Buddha, our actual human condition. Suffering can never be entirely banished from our life, nor even from one moment of it.

But the Buddha is saying more: it is not enough to assent intellectually to the all-pervasiveness of suffering in our lives. We must “get it” on an emotional level. We must feel, for ourselves, how our discomfort goes on and on, now taking one form, now another. We must feel the unending fire of suffering so fully that we give up hope of escape, and we surrender. When we do so, the way is open for discovery of the third noble truth: that ultimately suffering may not be the terrifying specter we have imagined it to be.

The Fourth Noble Truth: Suffering as a Resource

In explaining the power of meditation, Chögyam Trungpa Rinpoche makes the interesting observation that as long as we feel we can escape from the present situation, we won’t notice very much about it. Only when we feel that “this is it,” and that there is no escape will our perceptions, our feelings, and our intelligence really come alive.

In the case of suffering, as long as we feel that there is some fundamental way out, we will not see what it actually is or notice its possibilities. When we become sensitive and aware enough to see that there really is no way out and we surrender to that fact, then we can begin to make some interesting discoveries. We see first that our resistance has been based on our expectations about ourselves and our lives. We see that our ego ideal-our image of who we should or could be, and what life could or should be-is not as solid or necessary as we thought. We see that all of this is our own self-maintained drama and we see its ultimate nonexistence. And in that moment, we let go.

In doing so, we discover, with some amazement, that we do not just cease to be, as we had so greatly feared. Instead, we have crossed over some threshold and entered into a different kind of existence. We find ourselves softer, fuller, more complete. Suddenly, we are no longer in a hostile and threatening environment where we are constantly fighting for our lives, our safety, our dignity, and our nourishment. Our fear is gone and we find, at that moment, that the universe is a place of blessing.

Tenzin Palmo, an English woman who was in retreat in a tiny cave high up in the mountains of Ladakh for many years, shows what this kind of realization can mean. One May, when the undersoil had ceased to be frozen, it was raining and the entire inside of her cave, including her bedding and her clothes, was soaking wet. In this environment, her health was poor and seemed to be going downhill. She found herself yearning to feel better and became quite depressed. She reports:

Then I thought, “But didn’t the Buddha say something about duhkha [Sanskrit: suffering] in samsara? Why are you still looking for happiness in samsara?” and my mind just changed round. It was like, “That’s right. Samsara is duhkha. It’s OK that it’s raining. It’s OK that I’m sick because that’s the nature of samsara. There’s nothing to worry about. If it goes well that’s nice. If it doesn’t go well that’s also nice. It doesn’t make any difference.” Although it sounds quite elementary, at the time it was quite a breakthrough. Since then I have honestly never really cared about external circumstances. In that way the cave was a great teaching.

With this understanding, we can make sense of the Buddha’s injunction in the fourth noble truth not only to realize the inevitability of our suffering, but to make use of it. We see that by risking everything, by taking our suffering seriously, by looking at it and contemplating it, by entering our awareness into it and experiencing it fully, some fundamental, surprising, even shocking transformation can occur.

This, of course, is hardly a one-shot deal. It certainly does not mean we have become fully enlightened. But it does open up for us a new kind of relationship to our suffering. We begin to see that it is an essential, powerful resource in our lives. We understand its appearance still as a threat-of course, how could it not be?-but a threat that is also an opportunity. In fact, the deeper the threat, the more opportunity we dare to find in it. When suffering arises, we can look at it, experience it and surrender to it, with dignity and confidence, and let it work its magic. We know it holds something for us. Here is where meditation comes in, because it provides the tools to bring this about. We sit and open, resisting the temptation to run away, coming back to our suffering moment after moment.

Interestingly, this kind of approach does not lessen the impact of suffering. In a way, it frees us to face and experience our pain in a much fuller and more direct way. But we have confidence in that process and repeatedly find genuine transformation in it. For this reason, duhkha is called the “first noble truth.” It is the truth that is primary and ever-deepening, that continually gives birth to wisdom.

In the Vimalakirti Sutra, the Buddha makes the comment that we, as human beings, have been given suffering so that we can have a spiritual path. Without it, we would be forever caught in the “self,” our image of ourselves, a straitjacket of our own making. Suffering is the Buddha’s greatest gift, so the text says, because it continually frees us from small and limited selves and makes possible the unending journey toward our own totality.

Suffering shows us our boundary-the boundary of our desire to be something specific, definitive, secure and solid. It represents the pressure of reality. The more we give in to it, the more we are touching the very being of the universe itself.

Ayya Khema comments that in realization, “It is not suffering that ceases, but rather the one who suffers.” What is left? Dogen remarks, “To lose the self is to be enlightened by all things.” These things that caused us suffering are now seen as the very illumination of the universe itself. When we surrender to our suffering, we are giving over our own being to the very being of the world. We are letting our own limited understanding go, and letting our awareness join with the dharmakaya, the sacredness of what is. At this point, as Ayya Khema says, it is not that duhkha is transformed but rather we who are transformed, so that we have a different understanding, appreciation and relationship with it.

The Buddhist teaching on suffering thus possesses extraordinary power for the individual. It also affects our relationship to others: in acknowledging our suffering we understand something fundamental about the experience of other people, in times and places both near and far, and this leads to empathy and a sense of connection with them.

This teaching also has social and economic implications on a global scale. Imagine what an understanding of the first noble truth could do to this world of increasing consumerism, where entire societies are premised on the belief that pain can be eliminated through ever greater accumulation of money, possessions and power. What would be the impact of a recognition that all of this is a losing battle, that no matter what lengths we go to, we can never really solve the basic human dilemma of suffering? Might this not provide room for a shift of values away from the depredation of people, cultures and the environment and toward a recognition of the bittersweet nature of our common lot? Could it not lead to greater sympathy and compassion, and to working with others rather than against them to address our problems?