They say that fences make good neighbors, but in this story of waking up on the spot — published to mark our community retreat, Waking Up In Every Moment, which will be livestreamed on August 29th and 30th — Kate Wheeler learns that some barriers should just come down. 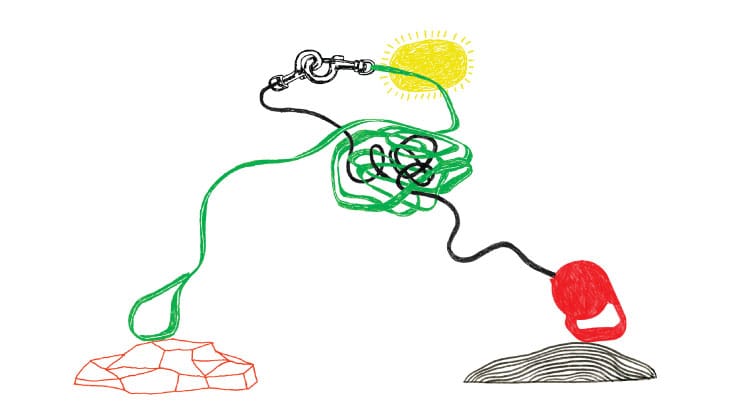 I was at a retreat on loving-kindness when it came time to send goodwill to what traditional texts call the Enemy, but we in the West more gently to refer to as The Difficult Person.

She sprang immediately to mind, a slender woman who walked a white German Shepherd. Once we’d chatted about baking bread. More recently I’d been sweeping dead leaves in the driveway when she’d let her dog dart in and attack my new puppy. After I dragged him to safety with the leash, my difficult person remarked with an odd grin that her dog was provoked by “the submissive breeds.”

I silently offered her the traditional phrases: “May you be safe, happy, healthy, and live with ease.” And then, my mind added, “Despite how you would have let your dog kill mine.”

Soon after the retreat, Difficult Person came by taping flyers onto light poles, calling for armed retaliation against a government. My husband and I secretively ripped them down. “May you feel safe enough not to wish harm on anyone,” I wished her. Next, I saw Difficult Person and her boyfriend unloading big, blue plastic barrels from their car. Rainbarrels, surely—but could I be entirely certain? What if they’re preparing a fertilizer bomb? I wondered. How awful it was to feel so paranoid, so media-infected. My practice: “May we both be safe, happy, healthy, and live with ease.”

I decided to begin waving and smiling. She would switch to the other side of the street. My no-longer-puppy wagged his tail at her Shepherd, who seemed intrigued. Or was that stiff, raised twitch an invitation to tangle, I wondered. “May you and your dog be happy.”

For two years, I persisted.

One day she stuck to her side of the street, clearly bent on an encounter. As our dogs sniffed and circled, and we kept up the “untangling leashes” dance, Difficult Person asked me not to take it personally if she didn’t wave back. She was autistic, she said, as was her boyfriend; other people were hard for them. But she wanted to say hi. We shook hands.

My dog died too young. Hers got stout and rickety. I’d see them struggling along, her supporting its hind legs with a sling. Now we each walk alone. Waving is unnecessary.

For more on Waking Up In Every Moment, watch our livestreams, available for free, on August 29th and 30th.

Kate Wheeler is a teacher at the Insight Meditation Society in Barre, Massachusetts, and the author of When Mountains Walked.