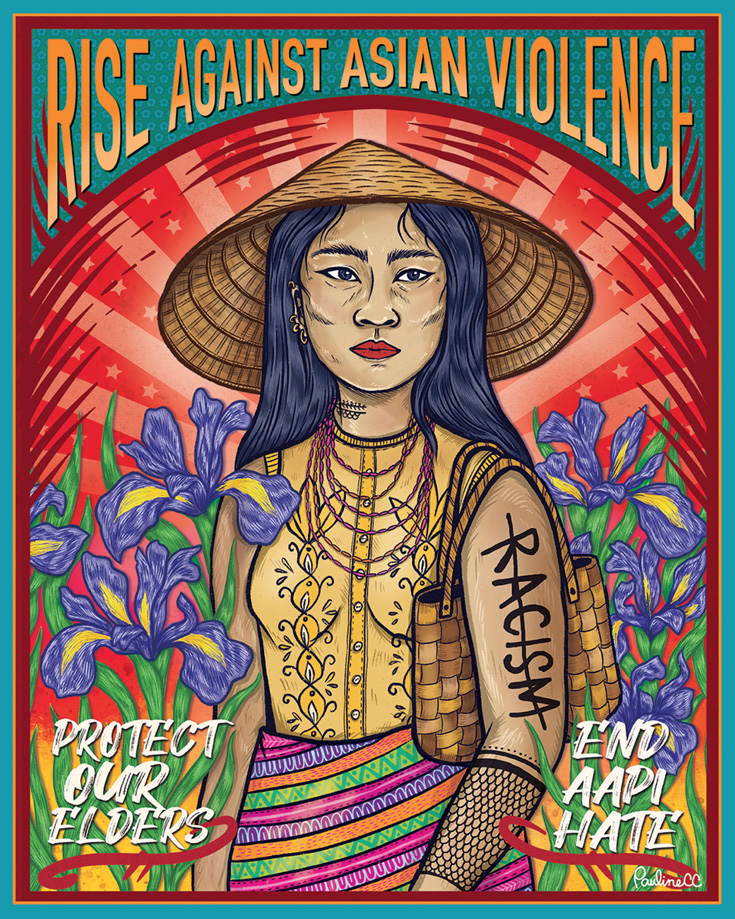 Illustration by By Pauline Cuevas / @pauline.c.cuevas for the California Endowment.

A couple weeks have passed since eight people, including six Asian women, were shot and killed near Atlanta. The story has already been bumped from the front pages, and there has yet to be a determination on pressing hate crime charges against the 21-year-old white male suspect*. With the investigation ongoing, I observed a question arising — Why do the most vulnerable among us have to die before we see them?

As I mourn the lives cut short, I am thinking about patriarchy and white supremacy, two interlocking systems of oppression whose distorted values fueled this crime. I grieve that we exist in a society that fails to protect the human dignity of people that are women, Asian, BIPOC, immigrants, and working class individuals. Whether or not a massage parlor job involves sex work, the suspect paid for massages to obtain sexual pleasure, and I want to call attention to how sex workers are endangered and exploited. Daoyou Feng, Hyun Jung Grant, Suncha Kim, Soon Chung Park, Xiaojie Tan, and Young Ae Yue were hard working women, daughters, grandmothers, mothers, and sisters. None of our lives are more or less valuable than theirs.

If you’re not practicing engaged Buddhism, what are you waiting for?

“Don’t rock the boat” is an English cultural warning against saying something that may upset people. As the American-born child of refugees of the U.S.-Vietnam War, that expression has additional weight. My parents are part of a group literally called “boat people” because of the vessels they used to escape. If a boat capsized while crossing he Pacfiic Ocean, the passengers would likely die. Many did; according to the United Nations High Commission for Refugees, between 200,000 and 400,0000 out of 700,000+ Vietnamese women, men, and children died at sea due to piracy, starvation, and drowning. I can feel the force of intergenerational trauma and cultural conditioning of “politeness” pressuring me towards silence, not wanting to “rock the boat.” I feel my own woundings getting triggered, and to the six Asian women who were gunned down, I see you. And as part of seeing you, my intention is to practice right speech and right view to honor your lives, even if it causes discomfort to myself and others. Discomfort is not much to ask of those of us that can still breathe. The six Asian women who are dead can no longer speak.

Practicing right view means having a clear understanding of the reality of a situation. A couple of my well-meaning white friends have asked me, “Couldn’t this just be a random isolated incident by a ‘crazy’ person?” My response is: no. No, a “sex addiction” does not rationalize killing. No, the history of racism in the U.S. is marked with acts of government violence against Asian people: the Chinese Exclusion Act of 1882, the internment of Japanese Americans during World War II, the colonialist wars in East and Southeast Asia, the harassment of citizens descended from the Middle East and South Asia after 9/11, and the former president racializing the COVID-19 virus with names like “kung flu.” No, I don’t believe the police would have sympathized that it was “a really bad day” if the suspect were Black.

While holding the suspect accountable for killing six Asian women, it feels important to state that their deaths are also the responsibility of the current social order that is being upheld by patriarchy and white supremacy: a system in which femininity is fetishized in Asian women and ridiculed in Asian men; a system in which the mainstream media bombards Asian women with the message that they “fit in” by being hypersexualized. If an Asian woman is quiet, it can play into a fantasy of a “docile concubine.” If an Asian woman is outspoken, it can play into the stereotype of a “dragon lady.” Misogyny and racism combine to create a deadly combination for Asian women because it dehumanizes them, turning them from people into bodies that can be used for pleasure and then discarded, in particular by straight white men. I am devastated that it has taken a tragedy for these truths to receive greater acknowledgment after long being denied.

My experience of getting raised in an Asian household meant being socialized to “save face,” which often meant not “making trouble.” As I feel the anger, despair, frustration, rage, and sadness in my body at the murder of six Asian women, I cannot ethically keep quiet. While white supremacy has exploited certain Asian social norms by “rewarding” silence with assimilation, I believe that Asian Americans can apply our location at the crossroads of multiple cultures as a tool for social justice. Being Asian and being American are not exclusive to one another. We can take pride in weaving our heritage into identity, and exercise a fundamental right of the United States: freedom of speech. May we use it wisely.

I reject the premise that invisibility is a fair price to pay for acceptance, especially when acceptance means validating the deluded and harmful construct of whiteness. I am unwilling to be a “model minority” in the samsara of present systems of oppression. Even though it is painful, I can be with the sting I felt when overhearing two white men talking about the “China virus” as I walked by them in my Brooklyn neighborhood. May that stinging transform into a ringing in my ear. May the ringing in my ear remind me that we are all complicit in the fact that six Asian women are dead insofar as we have normalized and minimized AAPI hate.

Before you ask someone, “Where are you from?” First ask, what is your intention? Is there a story you have that they may not belong because their body looks different than yours? And why do you think you belong and the other person may not when most of us, whether our ancestors chose it or were forced, are settlers on this land which some call Turtle Island?

It is impossible to awaken if you are not currently sleeping.

I have compassion for how overwhelming it feels to sit with the depths of how patriarchy and white supremacy are entrenched in the roots of the United States. We would all benefit from a re-rooting towards peace with each other and with nature because all of life is interdependent and interrelated. Such an undertaking involves multiple generations. With a bow to my ancestors and the six Asian women that were killed, I choose to (re)commit myself to the work of collective liberation and welcome others to join. If you’re not practicing engaged Buddhism, what are you waiting for?

As suffering is both relative and absolute, I thank white Buddhist practitioners who acknowledge the harm caused by their white privilege. Wanted or not, white privilege still confers benefits to someone if they look the part. By definition, it is impossible to awaken if you are not currently sleeping. If you feel you have benefited from the dharma, and wish to share the merit, only meditating on a cushion will not best serve on the path of an aspiring bodhisattva. The journey is radical, especially in an individualist culture, because it means embracing that our joy is inextricably interwoven with the wellbeing of others. For me, that means being in solidarity with the descendants of the lineages that have stewarded the dharma. As an action, that may look like donating to Red Canary Song or taking a free online bystander training like one offered by Hollaback! A survey they shared showed that only 29% of people received help while 79% of people wished that someone had intervened by distracting, delegating, documenting, delaying, and/or directing. The upcoming Dharma of Being Anti-Racist course at Spirit Rock is currently accepting applications. For transparency, I’ve completed both programs and found the education and allyship to be empowering.

With a bow to Quan Âm, Medicine Buddha, and all the Buddhas, may we be free from suffering.

*I acknowledge that hate crime prosecutions are a debated tactic in progressive movements.

Butterfly (Tony Pham) (they/he) is a meditation instructor, compassion teacher, and healer that occupies the intersection of queer and Asian/BIPOC identities. Butterfly stewards spiritual spaces where they offer practices rooted in compassion, indigeneity, and sacred lineages. They are a current student of Arinna Weisman (Theravada/Vipassana) and Lama Rod Owens (Vajrayana/Tibetan Buddhism) in addition to participating in the East Bay Meditation Center’s PiTA8 program for social justice activists. Tony previously received a Fulbright scholarship to conduct research in Vietnam; he has also completed compassion cultivation, death doula and non-violent communication training. Butterfly is honored to currently serve as treasurer on the board of directors of the Buddhist Peace Fellowship. They now reside in Brooklyn (occupied Canarsie/Munsee Lenape land). For more information, please visit tonyopham.com