Timothy J. McNeill delivers a heartfelt obituary for the late E. Gene Smither, remembering the man who lived his life among Tibetan texts. 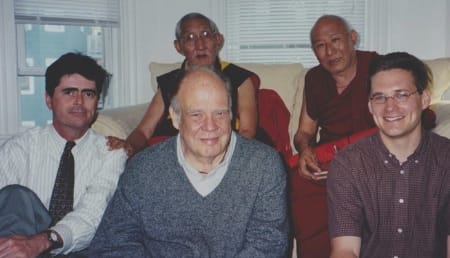 A full obituary by Smith’s colleague Janet Gyatso will appear in the next issue of Buddhadharma. Here, another close contemporary — Timothy J. McNeill, board member for Smith’s Tibetan Buddhist Resource Center and publisher at Wisdom Publications, where Gene spent time as an acquisitions editor and trusted adviser — remembers the man who lived his life among Tibetan texts:

While saddened by his passing it is most important to celebrate the life of Gene Smith, and his almost fifty years of extraordinary work to preserve the rich literary heritage of Tibet. He was widely regarded by Tibetans and Westerners alike as peerless in his encyclopedic knowledge of texts, traditions and personages.

Over the last ten years Gene had concentrated his efforts on the development of the Tibetan Buddhist Resource Center (TBRC.org). TBRC’s work focuses on creating an on-line digital library and bibliographical resource for the study of Tibetan literature. In 1998, after his early retirement from the Library of Congress, Wisdom had the great good fortune to offer a safe harbor for both Gene and the forty-foot tractor-trailer load that was his Tibetan text library!

During this period, when Gene was acquisitions editor at Wisdom, he conceived and launched the TBRC. He had already long been a legend in Tibetan studies, and Wisdom benefited hugely from his presence. Both Tibetan and Western scholar “pilgrims” from around the world would regularly seek him out.

While at Wisdom Gene was instrumental in launching our “Studies in Indian and Tibetan Buddhism” series. Among the first volumes in the series was Gene’s Among Tibetan Texts: History and Literature of the Himalayan Plateau, an anthology of the introductions he wrote for cataloging purposes of those texts he was saving and collecting during his years in Delhi for the Library of Congress. Circulated photocopies of Gene’s “PL480 papers” — named after the law that funded the cultural preservation effort — had been the mainstay of Tibetological research around the world since the early 1970’s. Lama Yeshe, the inspirational and seminal force of Wisdom, was among Gene’s earliest fans and also a beneficiary of Gene’s text preservation and publishing efforts.

Today, Wisdom continues to benefit as a leading publisher of scholarly works thanks to the three years Gene graced us with his presence. David Kittelstrom, who continues to lead these efforts editorially, was mentored by Gene.

Last week Gene had returned to his home in New York, weakened from a trip to India and Nepal during which he had an episode that would be interpreted as a minor stroke somehow related to his diabetes. His TBRC board of directors had convened in NYC in anticipation of a Friday morning meeting, when the news broke: Gene’s body had been found on Thursday evening, by Alak Zenkar Rinpoche Tupten Nyima. Our board meeting became an exercise in funeral arrangements and obituary composition. But it is interesting to note that Gene passed in a moment when the critical elements of his legacy organization — staff, board, major benefactors — were gathered together and able to minimize chaos and assure that his work will go on. In the most recent board meeting Gene had orchestrated the appointment of a successor executive director, while he was himself named Senior Scholar.

The outpouring of expressions of sadness and deep appreciation for Gene has been extraordinary, coming in from around the world.