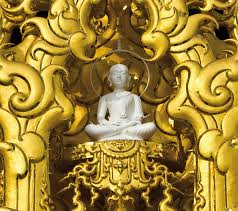 Doom-metal heroes Yob will soon be re-releasing a remastered version of their classic LP, Catharsis – but will be going with Buddhist imagery on the cover this time. (Website Invisible Oranges has a sample track if you like this kind of thing, and have 18 minutes to spare.)

Other YOB albums have had distinct Eastern-Religion influences, too, like Atma and The Great Cessation. Back in 2011, I did a write-up about Atma for TheWorstHorse.com; that follows here if you’d like to check it out and learn more about this undisputedly heavy and excellent band and its leader, Mike Scheidt.

(The below was originally published in July 2011. Since this post was written, I’ve seen Yob’s Mike Scheidt refer to himself as being influenced by many Eastern religions (which would make sense) but also state that he identifies particularly with Hindu thought (which would account for his interest in exploring the concept behind Atma‘s title.)

For a while now I’ve wondered about the band Yob. (Their name refers to a classic Warner Brothers cartoon; I distinctly remember being a teenager in bands and seeing the cartoon and thinking, Good band name.)

Anyway…: Yob has just gotten back at it after some inactivity. Hearing that, I recalled their last album; it was called The Great Cessation. Was it possible they could be talking about nirvana there? “The great cessation” is in fact one translation of the term parinirvana, the “final nirvana, which occurs upon the death of the body of someone who has attained complete awakening.” (Yes, I cribbed that from Wikipedia but it works for my purposes here.)

Yob’s new album (shown here) is called Atma. About the title, the great heavy music blog The Obelisk writes that it “refers to the Buddhist concept of the complete, spiritual self.” Now, that’s not a Buddhist concept, really — Buddhism usually emphasizes anatta, or not-self — but still: Hmmm. And in addition to a title track, there’s another song on the album called “Upon The Sight Of The Other Shore.” That sounds like it could be reference to the “other shore” referred to in the closing lines of the shorter version of The Heart Sutra, about which Barbara O’Brien writes:

The last words in the shorter version of the sutra are “Gaté Gaté Paragaté Parasamgaté Bodhi Svaha!” The basic translation, as I understand it, is “gone (or ferried) with everyone to the other shore right now!”

A little more Googling about Yob and Buddhism turns up a quick reference in a Rebel Extravaganza interview with vocalist and guitarist Mike Scheidt, in which he responds to the interviewer’s question about the use of the word bardo in the song “Ball of Molten Lead” from 2004′s The Illusion of Motion LP:

I’m surprised that one jumped out at you, man! A bardo is a term used in Buddhism. A bardo is a segment of life. The Tibetan Book Of The Dead goes into it, the bardos of life… the stages of life and death. More in depth, when you get into the places where the book deals with learning how to die. We go through time periods of trying to understand and remember who we are outside of this life.

And the band has a track called “Asleep in Samsara” on 2002′s “Elaborations of Carbon.”

Is all this a coincidence? And more important: does it matter?

I’m not saying that Scheidt is a Buddhist [he is not; see above note written since this was first published] or that YOB is in some way a “Buddhist band.”* (And either way, they get points for clearly not trying to cash in on Buddhism’s cultural cachet. They’re hardly hitting us over the head with the references here.) They probably wouldn’t want to be identified as a Buddhist band, even if they were. And I’m not saying they are. All I am saying is this:

If you like your metal on the heavy, doomy side, you should check’m out on their MySpace page, which includes the first track from Atma, “Prepare the Ground.”

And if you get a little something extra out of Yob’s music, well hey.