The garden, made of granulated beet sugar, pays tribute to the experience of Japanese Canadians forced to work on sugar beet farms during WWII. 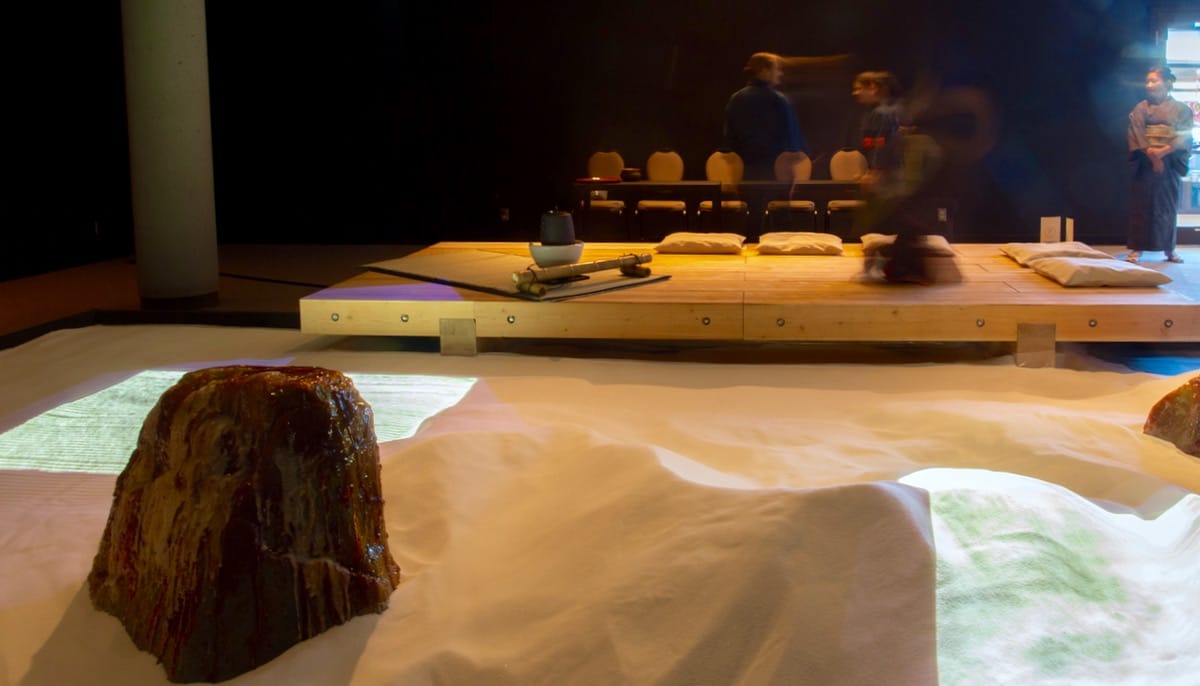 Along with granulated beet sugar, McKinnon’s Zen garden is comprised of boulders made from molten sugar poured over molds. Photos by Kayla Isomura.

When Kelty Myoshi McKinnon decided to create a Japanese rock garden, she wanted its visitors to contemplate the treatment of Japanese Canadians during World War II.

Her art installation, Beta Vulgaris: The Sugar Beet Projects, recently opened at the Nikkei National Museum and Cultural Centre in British Colombia. The installation is a Japanese dry garden (often called a “Zen garden”) made from 4,500 pounds of granulated beet sugar—each granule memorializing the forced labor of Japanese Canadians on sugar beet farms.

As a landscape architect who has spent time in the dry gardens of Kyoto, McKinnon chose the garden as the design for Beta Vulgaris because she believed it symbolized purposeful contemplation and embodied an aspect of Japanese culture.

“The traditional Zen garden is an enclosed, meditative space of raked sand and strategically placed boulders. Historically the white sand symbolizes purity. In the Zen garden, it represents water, emptiness, and distance,” McKinnon told The Source. “Contrasting the expression of sugar’s purity, generosity, and neutrality, is its history and conditions of labour.”

During the Japanese Canadian internment in the 1940s, almost 21,000 people were detained and dispossessed. Most families with farming experience were given a choice between staying together to work sugar beet farms or being separated into work and internment camps. During the war, forced labor supported 65 percent of the province of Alberta’s sugar beet acreage.

McKinnon’s great-grandparents and grandparents were strawberry farmers in British Colombia. During the internment, they worked on sugar beets in Alberta. After internment ended, her family saved enough money to eventually buy the farm where they were forced to move. Some of McKinnon’s cousins still farm sugar beets in the area today.

One of my mom’s first memories is of the blue sky and the clouds, and these big leaves overhead—the swaying sugar beet plants.

Before constructing her garden, McKinnon went on a road trip with her cousin, Keri Latimer, through British Colombia and Alberta, following the path their family took to the sugar beet farms. They filmed and photographed the location of their great-grandparents’ farm in BC, several internment camp sites, and then the sugar beet fields around Alberta. Along the way, they talked at length about intergenerational memory, dispersion, community, and what it means to be “at home.” These conversations helped McKinnon shape her art exhibit.

McKinnon remembers her grandmother once told her what it was like, as a teenager, to arrive by train in Alberta. Before being taken to the sugar beet farm, she stopped at a cafe for a meal and asked for a sugar cube for her tea. She was refused because she was Japanese Canadian.

“The irony is abhorrent,” said McKinnon in an interview. 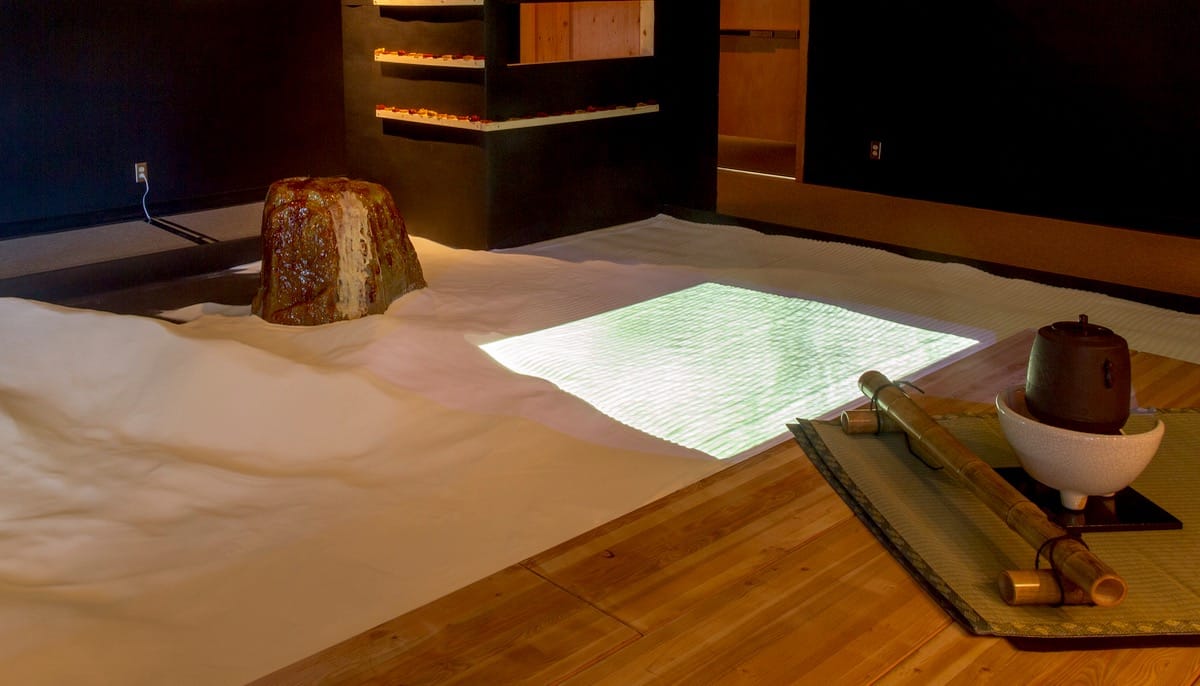 The installation includes a wooden platform, where visitors can sit and contemplate.

During her family’s first winter on the farm, they lived in an uninsulated granary before later moving to a small shack. There was no machinery to help them; every job—planting, watering, weeding, and harvesting the sugar beets—was done by hand.

As a landscape architect, McKinnon knows there are myriad relationships that can form between person and place. The sugar beet farm was where McKinnon’s great-grandparents found a new community of friends, where her grandmother married, where her mother was born, and where McKinnon remembers gathering with her extended family for Christmas dinners. Along with memories of forced labor, segregation, and dispossession, there are memories of resilience and love tied into the sugar beet farm.

“There are photos of my grandmother and grandfather getting married in this dusty prairie,” said McKinnon. “As my grandmother worked, she kept my mom in a basket out in the field. One of my mom’s first memories is of the blue sky and the clouds, and these big leaves overhead—the swaying sugar beet plants.”

McKinnon wants to ensure that her exhibit isn’t seen as a means to “play the victim” or “draw broad conclusions about good versus evil.” She simply aims to offer an art piece that asks viewers to sit and contemplate. She included a wooden platform overlooking the garden for this very purpose.

“I want to create something that is evocative and also contemporary,” said McKinnon. “I think it speaks to a lot of things that are going on today when certain media and politicians portray immigrants and refugees. There is a real parallel between the language that they’re using and the language that was being tossed around just before the legislation was passed to basically disenfranchise the Japanese Canadian community.”

McKinnon is also interested in the behavior of the sugar beet plant. The name of the exhibit, Beta Vulgaris, is the Latin name for sugar beet. The plant has a root system — a rhizome — that can reproduce even if the rest of the plant is destroyed. McKinnon sees symbolism in its ability to regenerate new life.

“Communities and families were annihilated along the coast, and yet, despite the government’s attempts to scatter and isolate Japanese Canadians, new communities were formed, and relationships created,” she told The Bulletin for the Nikkei Center. “The rhizome doesn’t recognize borders or hierarchy, it spreads in many directions at once.”

McKinnon’s great-grandmother and grandmother’s families were all Buddhist, as were many Japanese Canadian communities on the West coast. While McKinnon was never part of the Buddhist community, when she traveled to Kyoto, Japan she briefly studied Zen meditation, which helped her develop her own practice.

Although she says Zen is not heavily related to the exhibit, she believes her worldview has been heavily shaped by her experiences in Japan. “The qualities I wanted to create with the installation were very much introspective, contemplative, and spacial.”

Beta Vulgaris is open from February to May at the Nikkei National Museum and Cultural Centre in British Colombia.