Her graphic novel One! Hundred! Demons! was inspired by the 16th-century Zen monk Hakuin Ekaku, who painted his own hundred demons chasing each other across a scroll. 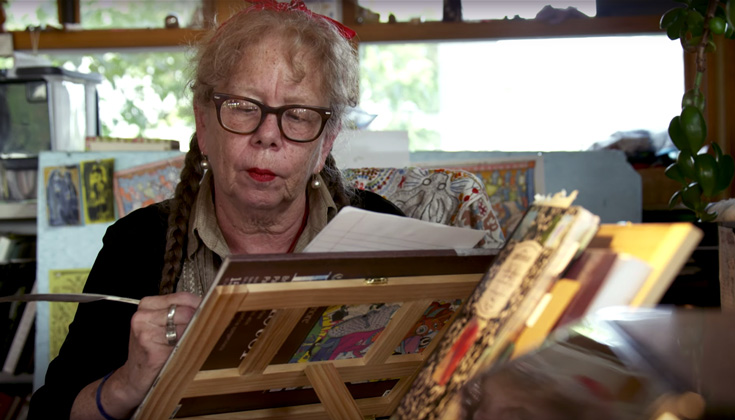 Zen-inspired cartoonist, graphic novelist, and educator Lynda Barry is one of the 2019 fellows of the MacArthur Foundation — the award known as the “genius grant” which grants recipients $625,000 over five years.

Barry, 63, received the award for “inspiring creative engagement through original graphic works and a teaching practice centered on the role of image making in communication.” She is best known for her weekly comic strip that appeared in alternative newspapers, Ernie Pook’s Comeek, and her graphic novels such as The Good Times Are Killing Me and The Greatest of Marlys. Barry’s 2002 graphic novel One! Hundred! Demons! was inspired by the 16th-century Zen monk Hakuin Ekaku, who painted his own hundred demons chasing each other across a scroll. In the book, Barry wrestles with her own life’s “demons” of regret, abusive relationships, and self-consciousness, amongst others.

Other pieces of Barry’s work have also been informed by Zen Buddhism. In her 2008 interview with Vice, she noted that she listens to Shunryu Suzuki Roshi’s “wonderful” Zen talks while writing and drawing in her studio in Wisconsin. Her images of meditating monkeys, and accompanying essay on the brush, ink, and Buddhism were featured in the Summer 2008 issue of Tricycle.

In 2011, Barry was profiled by the New York Times for her “Writing the Unthinkable” workshops where she educates others to discover their own creativity. She is currently the Associate Professor of Interdisciplinary Creativity in the Department of Art at the University of Wisconsin at Madison, and her forthcoming book Making Comics will be published by Drawn and Quarterly in November 2019.

“The MacArthur, for me, is the biggest thing that’s ever happened to me in terms of being able to facilitate chasing this idea down of what images are, why they exist, and what happens when people finally have access to having them be part of their life again,” says Barry in the video posted by the MacArthur foundation announcing her fellowship.