On February 1, Myanmar’s military, the Tatmadaw, overthrew the country’s democratic government in a coup d’état. In the wake of the coup and ensuing protests and violence, Randy Rosenthal reflects on his time spent in Myanmar and shares why Western Buddhists should feel connected to the birthplace of Vipassana. 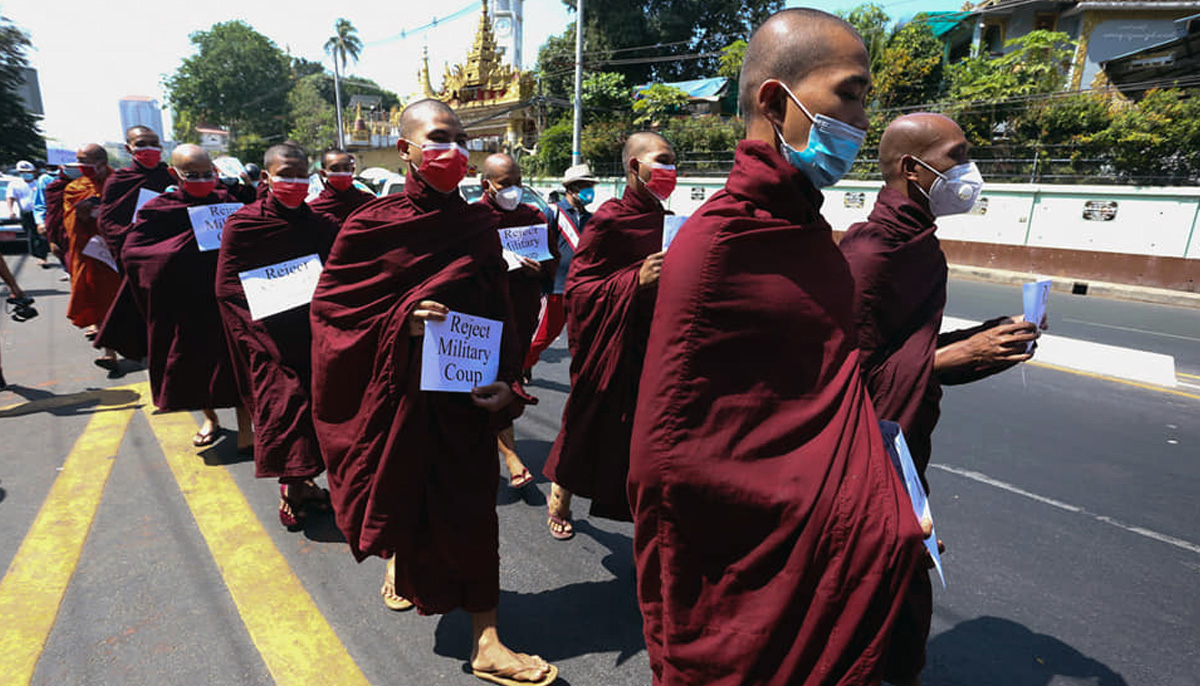 Monks protest the military coup in Myanmar. Photo via BBC Burmese on Facebook.

In 2018, I wrote an essay for Lion’s Roar that explored the connection between Buddhism and the ethnic cleansing of the Rohingya people in Myanmar. Seeing that “Buddhists” were committing violence against an ethnic minority disturbed me, so I wrote the essay to think through the issue and help others do the same. Now Myanmar is in the news again, because the military, known as the Tatmadaw, launched a coup.

In the hours before dawn on February 1, the Tatmadaw cut access to cell phones and the internet. They arrested elected officials of the National League for Democracy (NLD), including the party’s leader, Aung San Suu Kyi. The Tatmadaw declared a one-year state of emergency, and Senior General Min Aung Hlaing took sole control of the government. State television alleged the November elections were fraudulent, making the takeover necessary.

Some analysts believe the generals decided the play of democracy had gone too far, after their party’s unnerving showing in the election. Others explain the coup is due to the personal animosity between Aung San Suu Kyi and General Hlaing. In any case, over the week following the coup, a protest movement sprang up.

At first it was cautious, with the banging of pots and pans. Nurses, doctors, and teachers went on strike, holding up three fingers as a symbol of disobedience. Then thousands of protestors began marching through the streets of Yangon and other Burmese cities. Initially, the Tatmadaw responded with only water cannons, tear gas, and rubber bullets. But then they rolled out tanks, arrested hundreds of dissidents, and attempted a complete crackdown.

The last time an uprising like this happened in Myanmar was in 2007, during the Saffron Revolution, when thousands of people — monks and nuns included — were killed, beaten, arrested, and disappeared.

Just a few months before the Saffron Revolution, I visited Myanmar on a pilgrimage, or yatra. Because Burma, as the country was known until the military junta changed the name in 1989, is the birthplace of Vipassana.

According to the tradition I practice — taught by the late S.N. Goenka — Vipassana is based on the Buddha’s Discourse on Establishing Mindfulness, the Satipatthana Sutta. The efficacy of this meditation technique is why the Buddha’s teachings caught like wildfire during his lifetime and spread all over northern India. But about 500 years after the Buddha’s death, India lost this technique. Fortunately, neighboring Burma preserved Vipassana, and it passed down from teacher to student for generations. In the twentieth century, 2500 years after the Buddha’s death, the ancient technique reemerged to India and the rest of the world.

That’s the legend, but the fact is that Vipassana is a modern movement, akin to a Buddhist Protestantism. Many meditators today may be surprised that it also has anti-colonial origins. In the 1800s, the British occupied Burma as part of the Raj. With their monarchy deposed, the Burmese no longer had a king to promote Buddhist values. The British discouraged the Burmese language in favor of English. Christian schools attracting students wanting to work in government rendered the traditional Buddhist monastery education irrelevant. By the beginning of the twentieth century, there was a real fear that Buddhism in Burma would die out. The religion needed to be protected. Ledi Sayadaw, a prominent Burmese scholar monk at the time, believed the way to do this was to put Buddhism in the hands of each Buddhist.

Ledi argued it was the duty of each Buddhist to study the Buddhist scriptures — not only the suttas (the Buddha’s discourses) and the Vinaya (disciplinary rules for monks and nuns), but also the Abhidhamma, the “higher teachings.” In addition, Ledi stressed that Burmese Buddhists should focus on the noble aspects of their religion, and non-violently resist colonialism. This led him to promote Vipassana as a daily practice for monastics and laypeople alike.

Going against tradition, Ledi said it is not necessary to master the scriptures before learning to meditate. One can have only a basic understanding of Buddhist doctrine and still benefit from meditation, he said. Nor was it necessary to master calming (samantha) and trance-like absorption meditations (jhanas) before practicing Vipassana. Ledi also wrote that meditation did not need be practiced in a monastery. He taught that awareness of breath and bodily sensations could be practiced while doing household chores or going to the movies. In other words, he brought what was once considered the esoteric to the mundane.

From Burma, Vipassana spread. Among others, the Burmese teachers Mahasi Sayadaw, U Ba Khin, and S.N. Goenka promoted the secular forms of Vipassana, also known as Insight Meditation, now so prevalent in the West. The Vipassana taught by the Ajahns of the Thai Forest and Sri Lankan traditions also came from Burma. Even Tibetan Lamas and Zen Roshis have incorporated the mindfulness of Vipassana into their Mahayana teachings. This history means that anyone who practices any form of mindfulness — be it at a monastery, a secular meditation center, through a meditation app, or in Cognitive Behavior Therapy — should feel an affinity for Myanmar today.

I feel a deep debt of gratitude to Myanmar, which prompted me to travel there back in 2007. I wanted to sit a ten-day course where Vipassana began, and pay proper homage to my lineage of teachers. I wanted to meditate at the International Meditation Center in the affluent area of Yangon near Inya Lake, where S.N. Goenka learned Vipassana from U Ba Khin. I wanted to go across the Rangoon River to the poor farming village of Pyawbwegyi, and meditate in the dhamma hall where U Ba Khin learned meditation from Saya Thetgyi, the first layman to teach Vipassana in systematic courses. I wanted to visit the monastery in Monywa, in Upper Myanmar, where Saya Thetgyi learned Vipassana from Ledi Sayadaw. I wanted to meditate in the cave across the Chindwin River where Ledi Sayadaw practiced when he wanted a break from the monastery.

I did that, and while doing so, I fell in love with Myanmar. Not just the land, but the people. Now, in the wake of a military coup, I’m worried about them. I’m very worried.