Recently, when I opened my copy of Offerings: Buddhist Wisdom for Every Day for a bit of early morning inspiration, as has become my habit, I found the following insight from Pema Chödrön:

Not causing harm requires staying awake. Part of being awake is slowing down enough to notice what we say and do. The more we witness our emotional chain reactions and understand how they work, the easier it is to refrain. It becomes a way of life to stay awake, slow down, and notice.

Reading it, I couldn’t help but think how relevant her comment is to the situation of North America in March of this year, a month that has felt downright summery. On the college campus where I teach, students have been gallivanting about in shorts, t-shirts and sandals, basking in the warm sunshine, and asking me to hold class outdoors.

It was unseasonably warm around the Ides of March 2012 and I’ve had an appropriate sense of foreboding. On that day The Washington Post reported that hundreds of temperature records had been broken; and the pattern continued for days with unprecedented record heat spanning much of the continental U.S. and Canada. In some places, temperatures were more than 30-40 degrees above normal — breathtaking.

The extent and intensity of the heat wave can be seen on the diagram below, courtesy of NASA’s Earth Observatory, a map that shows just how out of the ordinary these temperatures have been.  It shows temperatures of the land surface compared to the same eight-day period of March since the millennium turned. The red color represents areas with warmer than average temperatures while the blue reflects areas that were cooler than usual. 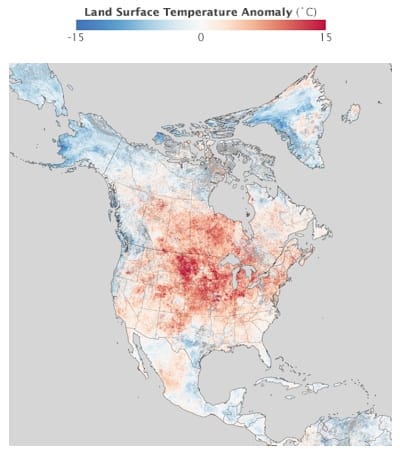 During this balmy spell, I’ve been teaching a course on so-called “natural” hazards. Pema Chödrön’s comment helps me realize how important it is that I enable students and other fellow beings to awaken to the seriousness of this unseasonal surprise. Though in my class I’ve concentrated so far on the more dramatic disasters — earthquakes, tsunamis, volcanic eruptions — the truth is that more human beings died from exposure to heat and drought in the period 1986 to 2008 than from any other type of hazard including floods and tornadoes, among the others I’ve already mentioned. Not far behind heat and drought in the list of leading causes of hazard-related fatalities is winter weather.

Weather-related disasters are unspectacular and slow-moving so they are easy to not notice. We can get caught up in the elation of a summer day seemingly gifted to us ahead of schedule or an October storm that causes celebratory whoops among school children who are seeing their first snow day of the season.

But if we slow down and take notice we learn from studies such as one completed by scientists at the National Center for Atmospheric Research that daily record high temperatures occurred twice as often as record lows over the last ten years across the continental United States. This shows that climate is shifting for if the planet was not warming, there would be roughly equal numbers of record high temperatures and record lows over the last few decades.

Despite the fact that teaching about such hazards can sometimes erode hope, I’m motivated by the desire to do no harm. I realized the other day that there is virtue in paying attention to not only the wrenching disasters but the slow-moving, potentially catastrophic ones. Doing so provides the opportunity to integrate mind and heart, understanding and behavior.