Inspired by ancient Buddhist artwork on cave walls, Amanda Giacomini set out on a mission to paint 10,000 Buddhas all over America. Lilly Greenblatt tells her story. 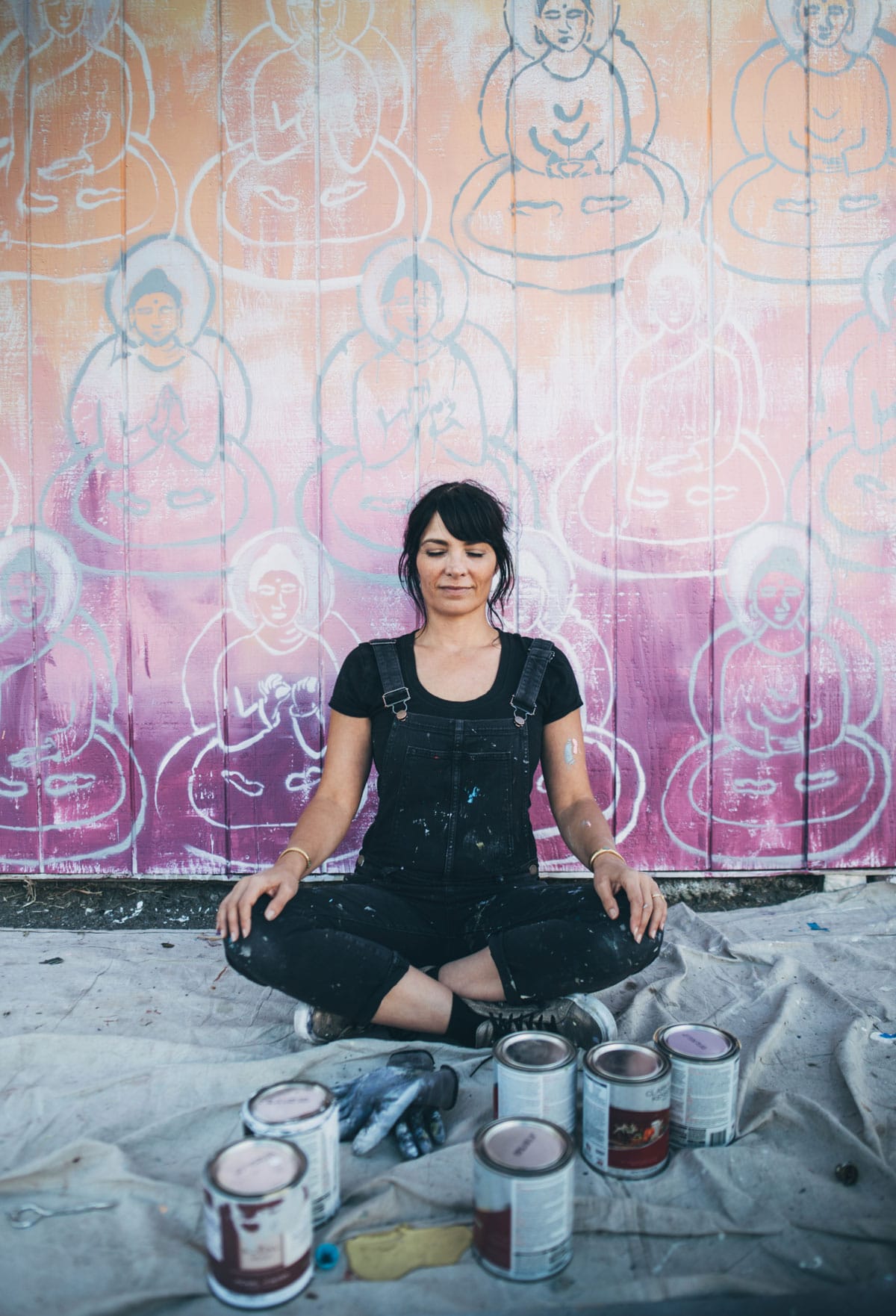 Artist and yoga teacher Amanda Giacomini only saw the inspiration behind her social-media-famous art project, Ten Thousand Buddhas, for a matter of seconds, but those few seconds have kept her painting ever since.

While studying Ashtanga yoga in South India in late 2006, Giacomini visited the Ajanta Caves, a historic site of a series of over 30 Buddhist rock-cut cave monuments and painted murals dating back to the 2nd century. The walls of the caves depict the traditional Jataka tales, which describe the Gautama Buddha’s previous lives.

As Giacomini walked through the dark caves, a guide scanned the walls with a flashlight, moving quickly to protect the precious images from light exposure. For a few seconds, a painting of 1,000 buddhas sitting together was illuminated before her. In the years to come, these little buddhas wouldn’t leave her mind.

“It wasn’t the most sophisticated of all the paintings in the caves,” says Giacomini, “but the buddhas were so captivating because it was all hand-done. All of their little faces all had different expressions and their hands were in different mudras.”

“It stuck with me for many years. It planted a little seed in my mind,” she says.

Years later, in 2012, Giacomini found herself still thinking of those 1,000 ancient buddhas. She set out to create her own version of the painting.

I was so excited as a practitioner… I made art that makes people want to practice.

“I loved the image and I wanted to be around it more, but I couldn’t go back to India. I was going to just do a big painting for myself,” she says.

Her first painting, eight feet by four feet, took Giacomini almost a year to complete. It depicted just 99 buddhas. As difficult as it was to paint, Giacomini says she found the act of painting the little buddhas to be calming and meditative. Giacomini decided to paint 10,000 buddhas — an ambition that, at the time, seemed impossible.

“At the time I thought ‘I might not be able to finish this in my lifetime,’ but I didn’t really care. The yogis who created the paintings in the caves weren’t thinking about finishing.”

At first, Giacomini covered various sized canvases with buddhas, the biggest being eight feet. Having studied fine art at Berkeley, she was used to doing traditional oil paintings. As she considered taking her buddhas to a larger scale, she needed a way to speed up the process.

Her husband, hip-hop artist and author of Spiritual Graffiti, MC YOGI, introduced her to street art techniques of stenciling, spray paint, and wheat pasting. The techniques helped her to paint her buddhas bigger and faster. Giacomini had laser-cut stencils made from her paintings of individual buddhas with their hands in different mudras, looking just like the originals. 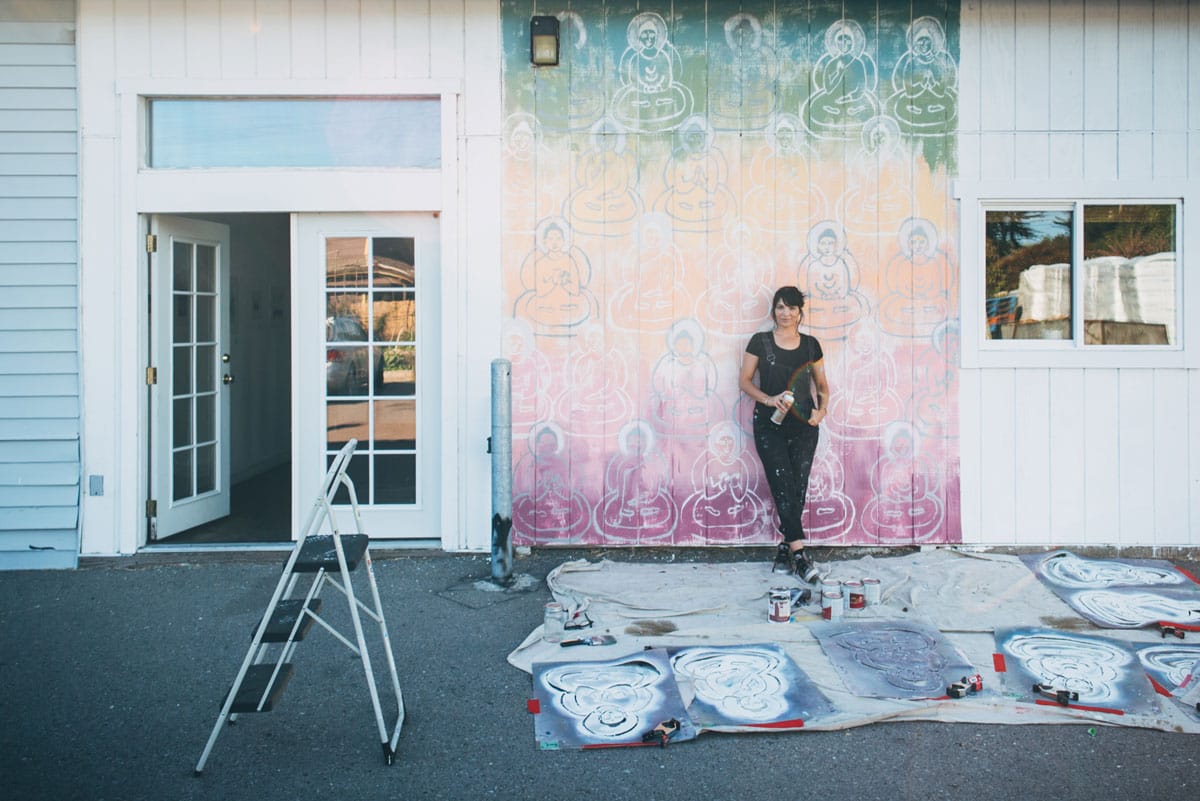 Giacomini uses laser-cut stencils made from her original paintings to create her murals. Photo by codyapp.com

While in Miami for Art Basel, an international art fair, Giacomini saw “an explosion of street art,” with groups of artists painting every wall in sight. She knew one of these large-scale walls would be the perfect place for her buddhas. The following year, a friend found her a 100-foot wall in Miami, in the heart of the Art Basel action.

As she painted buddhas onto that first wall, people stopped to talk to her, telling her of their own meditation and yoga practices, giving her thumbs-ups, and asking questions about the mural. She quickly fell in love with the connections that are made through creating street art.

“The buddhas just called forth a lot of interest,” she says.

When it came time to sign the mural, Giacomini didn’t want to use her name, as she says no one signed the paintings in the Ajanta caves. She had just set up an Instagram account for her project, so in lieu of her name, she signed the mural “@10000buddhas.” Ever since that day, she’s been tagged in photos daily of people in front of the wall, meditating with the buddhas or doing yoga poses, and smiling.

“I was so excited as a practitioner, thinking ‘Oh my God, I made art that makes people want to practice!’”

Since creating that first wall, Giacomini has never had to go out and search for a wall to paint — the requests come to her, and she’s happy to paint as many buddhas as she can.

“When I finished that first painting,” says Giacomini, “I thought ‘This is the best thing I’ve ever worked on as an artist and I just want to do more.’”

Giacomini draws great influence from a variety of Buddhist teachers, most notably Jack Kornfield, Robert Thurman, and Thich Nhat Hanh. Her walls have appeared at two well-known Buddhist centers — Spirit Rock Meditation Center in Woodacre and Against the Stream Buddhist Meditation Center in Los Angeles — but she doesn’t think one has to be a Buddhist to appreciate her work. Even if people walking by her murals know nothing about Buddhist practice, she says the buddhas give passersby “a moment of upliftment.”

#10000buddhas @spirit_rock So honored to have a wall inside this amazing center for Buddhist teaching. #meditate #educate #liberate 📷@earthaltar

“Art can transcend our human experience, so you don’t have to be a Buddhist to appreciate the imagery itself. It’s like a subconscious thing — seeing peaceful beings sitting together, doing something uplifting. It has a visceral effect on people. It makes them smile. It makes them happy.”

While painting a mural in Washinton, D.C., a group of Tibetan Buddhist monks suddenly appeared. A passerby had seen Giacomini painting the mural and drove to New Jersey to bring the monks back to D.C., where they performed a ceremony to bless the mural and “awaken the power of the buddhas.”

“That was one of the most incredible days of my life. They were so happy and they did this big ceremony voluntarily. That meant so much to me,” says Giacomini.

Giacomini completed her 10,000th Buddha last August, but she’s continued to paint and has no plans to stop. Next, she hopes to bring the buddhas to places that could use their positive influence.

“I’d love to bring the buddhas to places where it feels like we could use some of their energy and love.  All these shootings and the natural disasters we’ve had in the last year… I would feel really good to go to those places and paint some buddhas.”