Meditations, interviews, dharma talks and audio features to awaken your heart and mind. Subscribe on iTunes, Stitcher, and Spotify. 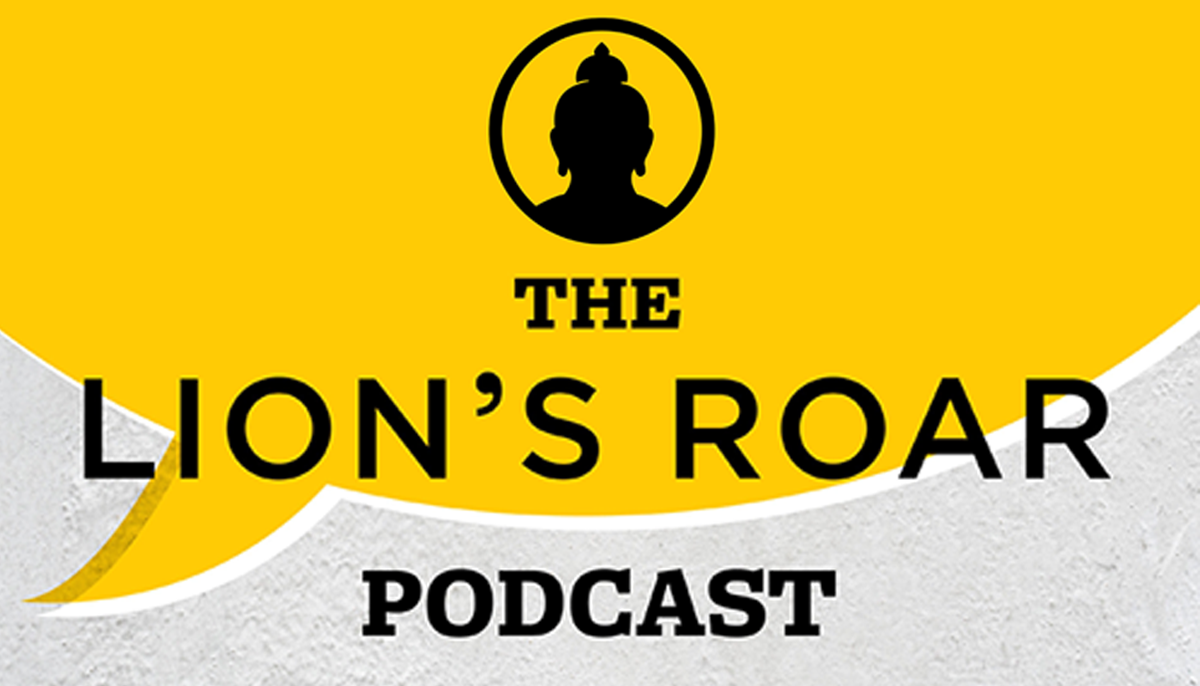 We’ve been publishing for decades about every aspect of life through the lense of dharma, collecting the works of leading Buddhist teachers on topics ranging from everyday mindfulness practice to facing your fears, protecting and connecting to the Earth, taking social action, and even knowing when not to take action.

The Lion’s Roar Podcast is where you’ll hear the voices of these teachers, as well as practitioners and creative minds who have been inspired by them. Their voices tell the stories of how Buddhist wisdom can fit into your real life whether you’re Buddhist or not.

Below you’ll find an up-to-date list of our podcast archive. Listen and enjoy!

Mindfulness, Work, and Deepening Your Practice with Beth Wallace

Beth Wallace is Lion’s Roar’s Associate Publisher, Finance & Operations, but she’s also big on dharma and mindfulness, and helps people understand and experience these for themselves. She sat down with Lion’s Roar’s Rod Meade Sperry to delve into the benefits of mindfulness at work, how work has changed since mindfulness entered the mainstream, and how to avoid some pitfalls in developing a deeper practice that works for you and your health, whether you identify as Buddhist or not.

Chan teacher and scholar Guo Gu shares the essence of his latest book, Silent Illumination: A Chan Buddhist Path to Natural Awakening, in which he explains embodied practice and Chan methods of realizing your Buddha nature.

Korean American Zen priest Cristina Moon responds to the recent rise in anti-Asian violence in her article, “Anti-Asian Violence Is an Attack On Us All.” Then a quick conversation with Zen teacher Sensei Dorothy Dai En Friedman, recorded in preparation for Love & Resilience: The Contemplative Care Summit.

In this special episode featuring music from Buddhist artists, Jessica Pimentel from Orange is the New Black talks to Lion’s Roar’s Ross Nervig about the intersection between her practice of Buddhism and her role as the frontwoman for the indie death metal group, Alekhine’s Gun. Then, rapper and meditation teacher Born I Music talks about the inspiration behind his latest single, In This Moment.

Love and Rage and Letting Go with Lama Rod Owens

Teacher, author, and radical black activist Lama Rod Owens explores what it means to let go of the person you think you are, and how to face the inevitable discomfort and brokenheartedness that comes with working to liberate yourself and others.

Zen teacher and author Josh Bartok talks to Andrea Miller about the process of writing Buddhist children’s literature, the concept of loving-receiving, and his latest children’s book, I See You, Buddha.

The Passing of Sojun Mel Weitsman / What’s the deal with reincarnation?

In honour of the life of Sojun Mel Weitsman we’re sharing a selection of clips in which you’ll hear him speak personally about his early days with Suzuki Roshi, the founding of the San Francisco Zen Center, and the founding the Berkeley Zen Center. Then, Buddhadharma’s Koun Franz is joined by Rory Lindsay, a Harvard University doctorate in South Asian Studies, to tackle some of the most common questions we get from readers about reincarnation.

How You Help Us Give the Gift of Dharma

The prisoner subscription program is just one of the positive things we’re able to do because of the generosity of readers and listeners. So Lion’s Roar’s Rebecca Pearson, Bakes Mitchell, and Ross Nervig got together to tell the story of how the program was inspired, and how listeners can help make the dharma more accessible to prisoners in need. Plus, a big huge thanks from Lion’s Roar for your feedback on the podcast, and some special episode recommendations to revisit until we return from holiday in the new year.

Lama Tsomo shares a guided tonglen meditation to apply your personal practice to widening social circles, and to move from fear into love.

Lion’s Roar’s Andrea Miller shares Pema Chodron’s advice on how to really “walk the walk” of a spiritual person, and what being a “fake” spiritual person really means. Also, Editor in Chief Melvin McLeod reflects on how we can lead with love and wisdom after the historic 2020 U.S. election.

Author, teacher, and founder of the Dongyu Gatsal Ling Nunnery, Tenzin Palmo has a frank discussion with fellow teacher and scholar, Pema Khandro Rinpoche about what advice Buddhism has to offer about health and illness during a time of pandemic. Tenzin Palmo also shares what she’s learned about suffering and gratitude while on solitary retreat in a Himalayan cave for 12 years, and what she did after.

Life Lessons from the Poker Table with Maria Konnikova

Professional poker player Maria Konnikova says mindfulness not only helps ground her in life, but in her gameplay. She tells Lion’s Roar’s Andrea Miller how, in an interview for the article, “Life Lessons from the Poker Table.”

Dr. Larry Ward, ordained by Thich Nhat Hanh as a dharma teacher in the Plum Village tradition, and the author of America’s Racial Karma: An Invitation to Heal, says much of the global turmoil we face today is the result of a history of thought and practice that has likewise justified slavery, environmental degradation, and other atrocities. The revolutionary act therefore is slowing down, practicing kindness, and cultivating joy. These are radical social acts. In this dharma talk about America’s racial karma Ward describes how we can start to heal the trauma in ourselves and in the world.

In the Issue: Poker, Kung Fu, Good Food, and Mindfulness

Editor-in-chief Melvin McLeod and deputy editor Andrea Miller talk about what’s in the next issue of Lion’s Roar magazine, from the cover story on teachings from the Buddha to the Kung Fu Nuns of Nepal, the power of mindfulness in poker, and tasting food from one of the best restaurants in the world. They also talk about  America’s Racial Karma, a new book by Dr. Larry Ward, and an excerpt from Sharon Salzberg’s new book, Real Change: Mindfulness to Heal Ourselves and the World.

Awakening My Heart on Retreat with Thich Nhat Hanh

Lions Roar’s Andrea Miller describes a six day retreat with the Vietnamese Zen Master Thich Nhat Hanh – one that promised total relaxation and ended up being a healing experience she didn’t know she needed.

In another helpful conversation about Buddhism, illness, and health—especially relevant in the coronavirus era—Buddhist teacher Karma Lekshe Tsomo gets personal with her colleague Pema Khandro Rinpoche, talking about what she learned from her own very scary brush with illness after being bitten by a poisonous viper. They also discuss using pain as a tool, managing uncertainty, why Buddhist practice “is more important than ever in a circumstance of illness,” and more.

Study Versus Practice with Stephen Batchelor

Stephen Batchelor is a teacher and author of the national bestselling title Buddhism Without Beliefs. Buddhadharma deputy editor Koun Franz asks him about the role of study in Buddhist practice – what divides the scholars from the practitioners – and how Batchelor bridges that gap, showing how practice opens up questions we can pursue with an attitude of curiosity that inspires us to investigate its foundations.

Anne Lamott grew up in a family with atheist parents and a great disdain for spirituality. Neal Allen was raised in a Protestant Christian family but until he was 52 years old believed he had no use for god. They were married by an episcopal minister, a Jesuit priest, and the Buddhist author and teacher, Jack Kornfield. In an interview for Lion’s Roar magazine, the joyous interfaith couple describe how they found the sweet spot where seemingly opposite beliefs meet.

Apology from an Abusive Father with Eve Ensler

Sharing your most personal stories can seem impossible. But in her book The Apology, Eve Ensler goes one impossible step further. She tells the story of her abusive father from his perspective. Ensler is known for her famous episodic play, The Vagina Monologues – a testament to the healing power of sharing the traumatic, scary experiences that we think we can’t tell anyone. In her interview with Lion’s Roar’s Andrea Miller, she explains how she found the courage to tell the story of her abuse, what it means to tell the true story of your trauma, how to respond when someone tells you their traumatic story, and how to create a culture around apology that allows for true healing in the aftermath of abuse.

Life as we know it has changed, including work life. Technology tends to fill in the gaps left open by the need to distance ourselves from one another, but can work and technology actually help our spiritual well-being? In his book, Buddha’s Office: The Ancient Art of Waking Up While Working Well, Dan Zigmond gives a lot of thought to bringing technology and spiritual life together in healthful, wise ways. Melvin McLeod talked to him about how we can find a balance between the two, and how to incorporate our work lives into our spiritual lives in a way that can help us achieve right livelihood.

Julio Rivera is the founder and CEO of Liberate, a meditation app and community for black indigenous and people of colour. We spoke in March, at the height of coronavirus related deaths in New York City, where he lives and works. We talked about what makes a sangha of non-white practitioners different, and why Liberate has shifted to focusing on black and indigenous healing foremost – a message that’s only amplified by the recent news, and demonstrations in response to, police violence against George Floyd and too many others. After the interview you’ll hear “Compassion,” the first song released from the Dalai Lama’s first album of music, Inner World.

Self-help with Melvin McLeod and Mental Health with Jeff Warren

The podcast is shifting to bi-weekly starting with this episode, allowing us to prepare a slew of new projects coming your way. Today, Lion’s Roar publisher Ben Moore speaks with Canadian meditation teacher and co-author of Meditation for Fidgety Skeptics, Jeff Warren about founding the Consciousness Explorers Club and engaging mental health through the lens of spiritual practice. But first, our editor-in-chief Melvin McLeod shares why Buddhism — famous for its doctrine of non-self— is the ultimate form of self-help.

How to Love with bell hooks / The Truth of Romantic Love with Dr. Polly Young-Eisendrath / Pure Love Tonglen Meditation with Dr. Judith Simmer-Brown

Author and activist bell hooks shares a simple formula for a healthy romantic relationships, starting with the myth that love is a feeling – a noun.

Jungian psychoanalyst and Zen Buddhist Dr. Polly Young-Eisendrath lays out the pitfalls of romantic love that lead us to idealization, delusion, disappointment and depression, and how to avoid them.

Then an introductory tonglen meditation to refresh and expand your heart, from the online course Flight of the Swans: Dharma Comes West, by Lion’s Roar and Naropa University.

How to Be Sick with Pema Khandro Rinpoche and Toni Bernhard

Buddhist teachers Toni Bernhard and Pema Khandro Rinpoche have both known chronic illness first hand. In this conversation—especially relevant in the coronavirus era—they talk personally about relating to health and sickness through the Buddhist lens, and Bernhard describes the teachings that continue to help her find peace even 20 years after being diagnosed with a life-changing illness.