Like fish in water, it’s easy for us to ignore the systems of injustice that surround us. Colin Beavan offers five tips to recognize injustice and swing into action. 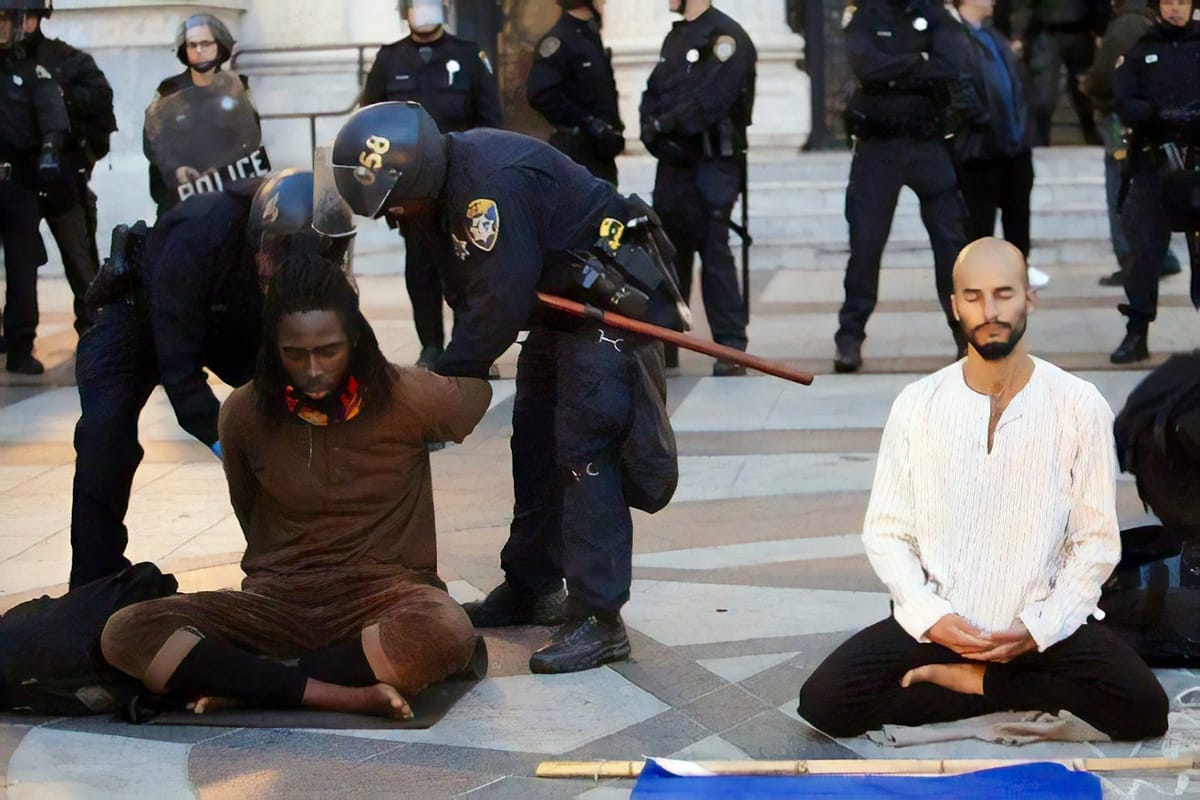 Police arresting meditators at an Occupy Oakland protest in 2011. Photo via nowpublic.com.

All over the world, people are faced with the same questions about our suffering planet: Is there any hope, or is it game over? Why are some people in denial about climate change? Why don’t politicians do something?

I really like that answer because, of course, we’re all grumbling. We’re scared and we’re worried. But, our vow to help must rise to the top. How can I help? As a sangha — a Buddhist community — there might be an even better question. Instead of “How can I help?” maybe the question should be “How can we help?”

Here is a five-step method to help sanghas get involved with social change:

1. Choose an issue of injustice

The first step is to choose an issue that your sangha cares about. It could be climate change, air quality, water quality, racism, equal rights, etc. There could be more than one, but it is easiest to start with one issue. A sangha can also choose to take action on one issue for now, and then move onto another issue in the future. This way, we can honor the many concerns held by our individual sangha members.

2. Examine the systems that cause the injustice

There is a story of a fish that has always lived in water. One day, someone comes along and asks, “How’s the water?” The fish looks surprised and asks, “What water?” It has lived in water for so long it doesn’t even realize that it is there. This is like the societal systems we live in. We have been living in the same systems for so long that we don’t realize things could be different.

When you choose an issue of injustice, the next step is to examine the established systems. For example, there are children in New York City who have asthma because they live too close to waste sites. The underlying problem is the creation of all this trash. We have a culture that consumes single-use items, like plastic water bottles. The government should be regulating water quality so that we don’t need water bottles. Air quality regulations should be prohibiting garbage trucks from driving through those neighborhoods. We must ask what systems contribute to the problems we see.

Obviously, there are many ways to apply pressure to each of those systems. A common question that stops people from taking action is: “What is the best work to do?”

We may never know what path of action is going to fix an injustice because there are so many injustices from so many sources. Nobody is really wrong when it comes to coming up with solutions because we need all of the solutions. If we stop and wait until we figure out which solution will work, we’ll be permanently stopped. So, just do it!

3. Understand why spiritual practitioners are important in social change

It’s sometimes said that civic engagement, politics, and spirituality should be kept separate. But some of our most effective civic leaders have also been spiritual leaders. Vandana Shiva is a Hindu food justice leader in India. Reverend Martin Luther King Jr. led the civil rights movement. Lucretia Mott was a Quaker abolitionist and women’s rights leader in the US. Ingrid Mattson is a Muslim activist from London. Rabbi Sharon Kleinman works in gay rights, and Reverend Sally Bingham heads the Christian climate organization Interfaith Power and Light.  The list of past and present spiritual activists goes on and on: Mahatma Gandhi, Desmond Tutu, Maha Ghosananda, Thich Nhat Hanh…

There is a photograph I like of a meditator at a political protest being handcuffed while he sits in the lotus position. It’s kind of shocking. There seems to be something so unjust about a meditator being arrested.

A spiritual practitioner has a particular weight when they become part of social change because they are perceived to have a certain moral authority. I’m not saying we do have it, but because many assume we do, we can add weight to the cause we’re working on.

We can also help promote non-violence. Many activists I encounter are so filled with fear and stress from doing this work for so long that non-violence is hard for them. They need people who are centered to help in that regard. We can also offer tools of resiliency. One of the things I think about a lot is being a chaplain to communities of change. By going to meetings and offering spiritual succor, you can provide activists with tools to prevent burnout.

4. Learn from other Buddhists and spiritual communities

Many Buddhist communities are taking action, both within their sanghas and in the work they’re doing in the world. We can learn from that.

For example, Brooklyn Zen Center’s website includes a commitment to inclusivity within their own sangha. Greg Snyder, senior priest of the Brooklyn Zen Center, said he doesn’t believe that his sangha will become diverse until the leadership becomes diverse. To encourage diversity, Snyder has separated the abbot role — now selected from a diverse community by the board of directors — and the teaching role — filled by transmission, as it always has. In another example, Insight Meditation Society Member Regina Valdez filled three buses with Buddhists to go to the People’s Climate March in Washington D.C. — the biggest climate march in history. Valdez is an IMS member who decided to reach out and bring people together. It doesn’t have to be teachers who lead the work.

Korean Zen master Dae Soen Sa Nim wrote the following in one of his teaching letters:

To do together action, meet people who care about what you care about and know more about it than you do. Join their organizations. Learn with them and learn from them. Lend support to their efforts. We don’t have to organize our own climate march; there are lots of people who are already organizing. All it takes to join in is showing up and doing together action.

Adapted from “Like a Fish in Water,” a talk at The Whole World in a Single Flower Conference 2018.

Colin Beavan is a life coach, author and senior dharma teacher in the Kwan Um School of Zen.