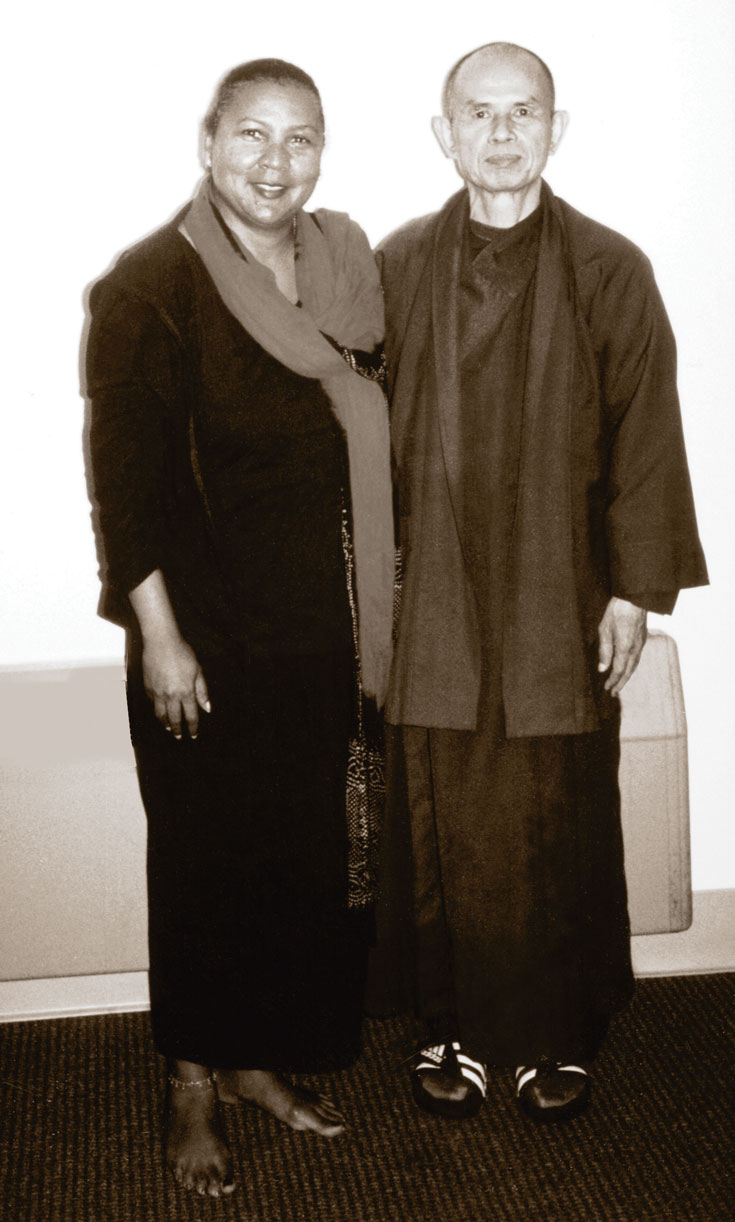 I did not know what to expect when I first encountered Thich Nhat Hanh at a retreat, which focused on Vietnam and the survivors of the war there. But unlike most Buddhist retreats, it was a diverse feast.

By his very presence as a man of color teaching about spiritual practice, Thay has always been an intervening force in systems of domination—racism, patriarchy, classism. Unlike many patriarchal Buddhist teachers, he has worked alongside a woman, Sister Chan Khong, for more than fifty years. She has been both his guardian/protector and friend, and usually someone who wants an audience with our beloved teacher has had to meet her first. Concurrently, no one has complained about racial hierarchies in the world of Thich Nhat Hanh.

Diversity is about representation, but it is more importantly the groundwork for pluralism. Diane Eck of the Pluralism Project at Harvard University expands on that: “Pluralism is not diversity alone, but the energetic engagement with diversity. Diversity can and has meant the creation of religious ghettoes with little traffic between or among them. Today, religious diversity is a given, but pluralism is not a given; it is an achievement. Mere diversity without real encounter and relationship will yield increasing tensions in our societies.” In addition, she continues, “Pluralism is not just tolerance, but the active seeking of understanding across lines of difference.” Finally, she concludes, “Pluralism is based on dialogue.”

I am amazed by his awesome gentleness of spirit.

Thich Nhat Hanh’s work embodies the essence of pluralism. No doubt the pervasive nature of white supremacy has kept scholars and readers alike from saying much about Thich Nhat Hanh as a brown man. It’s as if many of his followers want to imagine his saintliness as transcending issues of color. But for people of color in the world, he stands as a beacon of light—someone who always worked for peace and justice. And, for him, the work began with spiritual practice.

In 1999, I had the honor to interview Thay for Lion’s Roar. We talked about Martin Luther King Jr.’s deep influence on him, particularly King’s teachings on “beloved community.”

“Martin Luther King was among us as a brother, as a friend, as a leader,” he replied. “When you touch him, you touch a bodhisattva, for his understanding and love was enough to hold everything to him.

“He tried to transmit his insight and his love to the community, but maybe we have not received it enough. He was trying to transmit the best things to us—his goodness, his love, his nonduality. But because we had clung so much to him as a person, we did not bring the essence of what he was teaching into our community. So now that he’s no longer here, we are at a loss. We have to be aware that the crucial transmission he was making was not the transmission of power, of authority, of position, but the transmission of the dharma. It means love.”

When I think of Thay now, I am amazed by his awesome gentleness of spirit. Through the years, it’s always been clear that he’s a teacher of tremendous integrity; there has been constant congruence between what he thinks, says, and does. As a teacher, he’s helped me understand the importance of a dedication to truth. With him as an example, I’ve consistently worked to be a worthy teacher, a worthy spiritual practitioner, and to be radically open.