Psychoanalyst Robert Langan traces the current climate of demonization to the three poisons: greed, aversion, and the ignorance of self-righteous certainty. 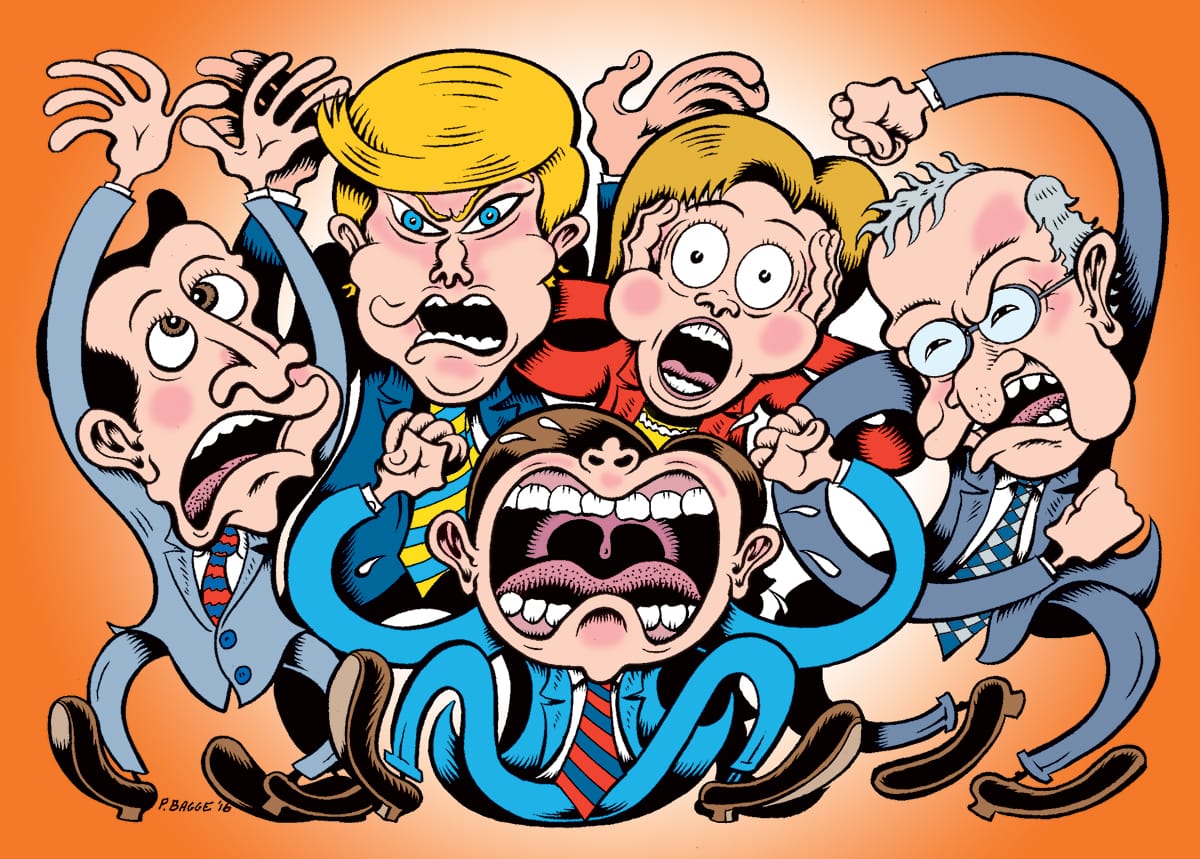 In this election year of 2016 you may have decided that the country—if not the world—has gone crazy. We have war and mayhem abroad, teetering economies, millions of refugees, and an ever-hotter planet. At home, from sea to shining sea, we have 0.1 percent of the population owning as much wealth as the bottom 90 percent. The diploma earned through higher education has become an IOU for thousands of dollars of debt. Working hard earns less of a living. For far too many, the American dream is evaporating.

Oh dear, what can the matter be? What to do? Some conclude that the experiment in government of the “founding fathers” has patently not worked out, and the best course is to let the system crash and then reboot. Others say let’s work with the government we have and improve it. We fear things becoming worse and hope to make them better. There’s the rub.

Our country is in the midst of a polarized conflict between hope and fear, with each side’s hope becoming the other side’s fear. The social democratic state that some on the one side would welcome is for the other side a stake to the heart of individual liberty. That unregulated liberty, a joy to the one, is an invitation for the other to a winner-take-all dystopia of dog-eat-dog ruthlessness.

Yet demonization of the other only fuels the conflict. The more certain one’s sense of righteous rectitude (the side of the angels), the more adamant is one’s determination never to shake hands with the devil. When the course of action must be my way or no way, then no compromise and no retreat is a declaration of war.

Have we come to this, a civil war? Hope says no; fear quavers yes and man the ramparts (all the while hoping the attackers stay away). This has happened before. The militia armories scattered here and there about New York City were built during the last Gilded Age as places of refuge for the haves should the have-nots take to rioting in the streets.

How did they avoid class warfare? In part, by listening to the muckraking journalists who revealed poverty as a problem not just for the impoverished, but for all—rich and poor and in-between. Anger and frustrated impotence, as virulent as today’s, gave way to cooperation.

The causes of uncivil conflict then and now remain the same. From a Buddhist perspective, we can trace the sources of this suffering to variants of the three poisons: greed, aversion, and ignorance.

The greed can be taking more than I need, perhaps unwittingly and to the detriment of others. Greed can make me feel happily bigger—and unhappily in need of even more.

The aversion can be not caring, or actively hating and hurting, perhaps reassuring oneself that the ends justify the means.

The ignorance can be petty self-centeredness or domineering self-aggrandizement built on the illusion of my superiority. Or it can be a simple refusal to abandon certainties for doubts, substituting the simplistic for the complex.

I have a choice between opening my mind or closing it, always with room for reconsideration as to whether what seemed like an opening might be a closing. My choices and my courses of action (including my votes) remain best guesses.

The points of view I take to be devils and angels are not just out there, but also in my mind. A devil cackles in one ear, an angel allures in the other. I do not know which to listen to, especially because good and bad are rarely clear-cut. The dollar I give the beggar can turn into an overdose in his hypodermic. The dollar I do not give the beggar, what of that?

Best intentions have unintentional consequences. My predictions presume past conditions when the predictions worked out, but conditions so rarely stay the same. I do not know. I cannot tell for sure. My model of the way the world works is just that, a model based on my past experience. My experience is limited by my birth, the people and teachers who influenced me and didn’t, the circumstantial drift of my life over which I have had so little, but some, control. Your experience is the same. We drift alongside each other. Pleased to meet you. Shall we vote?

The acceptance of not fully knowing does not stymie action. It credits others’ ways of knowing as complementary indicators of what we humans should be doing with ourselves, our communal best guess. Three hundred million stories should overlap a lot. And seven billion stories criss-cross this naked planet.

We have all been howling babies, powerless and dependent, born to a world shaped by our forbears, now shaped and to be shaped by us grown-ups. We share the hope that our fears can lessen, and our hopes thrive. May we listen to one another, all of us as one.

Robert Langan is a psychoanalyst and longtime Buddhist practitioner. He is the author of Minding What Matters: Psychotherapy and the Buddha Within.