Dexter Cohen Bohn shares how Buddhist practice can provide a non-violent approach when it comes to law enforcement and policing. 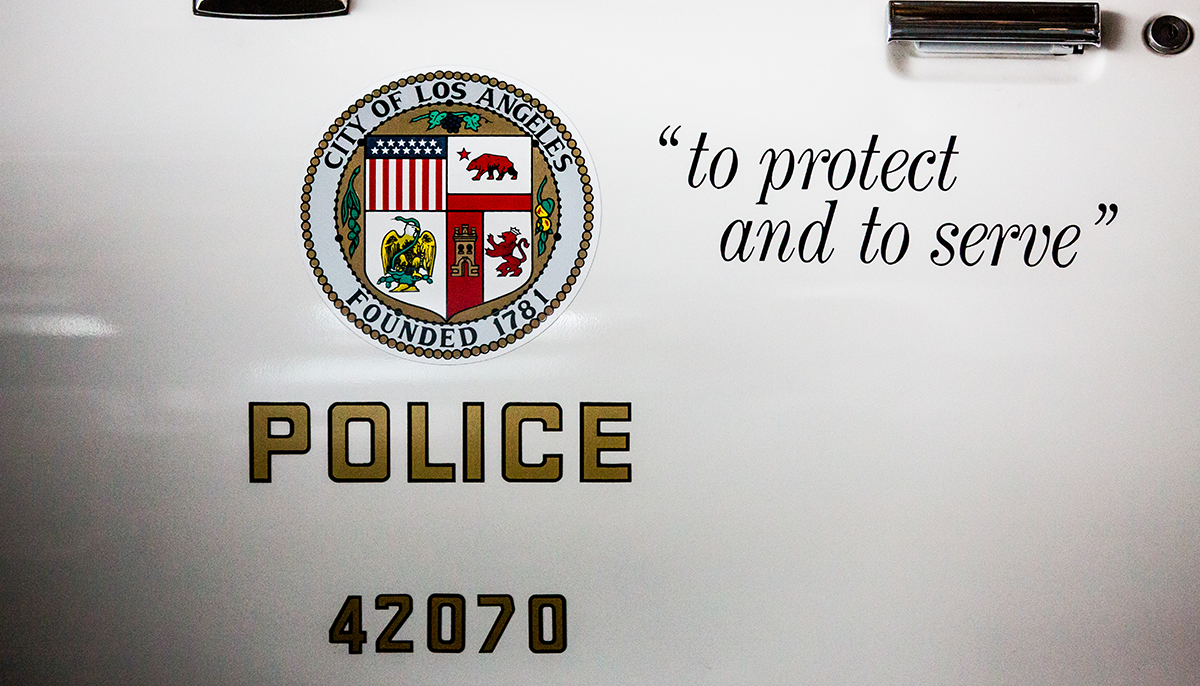 It was mid-August, 1965 and bullets were ricocheting beneath billowing plumes of smoke that hung over a seething 46-square mile urban war zone in South Central Los Angeles. Watts was burning and minds were churning as police officers hurriedly reloaded firearms behind black and white patrol cars emblazoned with their city crest and a pithy new slogan. Just two years earlier the LAPD had adopted “To Protect and to Serve” as their departmental motto and tooled this missive across the door panels of each cruiser which now shielded the “Thin Blue Line” from civilian fury.

Sparked by allegations of police abuse in the arrest of 21-year-old Marquette Fry, who had failed a field sobriety test, the predominantly black community’s overwhelming response stemmed from decades of suffering at the hands institutionalized racism and segregation epitomized by the recent 1964 repeal of the California Fair Housing act – a move latter deemed unconstitutional by the Supreme Court.

Despite the begrudgingly bold transformation in values that such a shift toward restorative justice would represent for modern policing, we need not look further than our own hearts for its essential catalytic ingredient: unwavering compassion.

Clearly, the 34 deaths, 1,032 injuries and over $40 million dollars of damage incurred during the Watts riots indicated a patent failure of the Law “to protect” life, limb or property. But these accountable layers of suffering are only half of the equation. Walking the charred streets in search of local perspective, black civil rights activist Bayard Rustin uncovered a chilling intuition of the destructive power which a lack of “service” can reap. After questioning a local unemployed youth on what he had made of the tumult, the man’s grinning response took Rustin by surprise.

“We won,” he said. “We won because we made the whole world pay attention to us. The police chief never came here before; the mayor always stayed uptown. We made them come.”

This telling remark highlights the gulf that existed — and still persists — between prescient community needs and the distracted focus of policing practice. What Watts needed was compassionate attention; what it got was the combined force of nearly 14,000 national guards called in “to protect” civil order. Regardless of its delivery, what mattered most to this young denizen was the fact that the entire nation had been forced to bear witness his neighborhood’s fomenting reality. This bitter-sweet victory may have justified the riot’s violent means, but is this combative flavor of justice really the only way it can be served?

In an illuminating dharma talk delivered at Plum Village in 2016, Cheri Maples, the now late lay dharma teacher and former captain of personnel and training in the Madison, WI Police Department, described the modern criminal justice system as based on the fundamental premise that punishment will heal the victim and rehabilitate the perpetrator. This retributive model generates untold layers of structural violence for both the police and society at large, as evidenced by the astounding numbers of mass incarceration in the United States.

While this punitive judicial approach is clearly dysfunctional, Maples sees hope for a genuine fulfilment of community needs in the principles of restorative justice which she outlines as an invitation “to look at all harm that has occurred, recognize those who were harmed, and explore how to repair that harm.” Despite the begrudgingly bold transformation in values that such a shift toward restorative justice would represent for modern policing, we need not look further than our own hearts for its essential catalytic ingredient: unwavering compassion.

According to Officer Maples, Thich Nhat Hanh, known as Thay to his students, helped her dissolve the tensions she felt between the professional and spiritual dimensions of her life.

While this nuanced interpretation of compassion as being gentle or fierce may be foreign to some practitioners, the Vajrayana traditions of Himalayan Buddhism treat the topic with characteristically vivid reverence. Particularly instructive to the question of principled policing is the pantheon of protector deities or Dharmapala (lit. Skrt. “Defenders of the Law”) considered to represent differing aspects of the enlightened mind in operational service to and protection of the dharma. These beings are typically rendered in either a wrathful or peaceful form, and play a significant role in the Tantric iconography of thangka and other Himalayan art. This variation corresponds closely to Maples distinction between the gentle and fierce modes of compassion, a point which invites deeper exploration of the meaning embedded in these arresting forms.

Buddhists the world over are familiar with peaceful images of Avalokitesvara / Kannon / Quan Yin, the predominant and devoutly loved bodhisattva of compassion. With gentle gaze and 1,000 raised arms, many of which brandish truly fierce weapons, this figure embodies the compassionate wisdom of skilful means which Thich Nhat Hanh poignantly illustrated for Officer Maples in pointing out that “Even carrying a gun can be an act of love if one is also armed with mindfulness and a compassionate intent.’’

In this same spirit, Mahakala, a fearsome Dharmapala, is regarded by the Vajrayana tradition as an emanation of Avalokiteshvara in wrathful form. Frequently depicted holding a curved blade and wearing a crown of skulls, the details of Mahakala’s appearance indicate important dimensions of compassionate action often left undiscussed. As with Manjushri’s sword, Mahakala’s weapon is a symbolic expression of the intellect utilised as a tool for cutting away the ignorance that so often clouds correct judgement. Similarly, his crown of skulls represents the transmutation of the five kleshas, or defilements of mind that, once purified, open our awareness to a greater sensitivity of others’ suffering. Appreciating these fiery dimensions of compassion embodied in Mahakala is precisely what is needed for a workable application of protection and service to the gritty realities of life that the police are called to meet every day.

A Buddhist Vision of Protection and Service

As with all Buddhist reflection, the rubber truly meets the road in the streets of the mind where lofty dharmic ideals are tested through experiential practice. For Cheri Maples and the Madison Police Department this meant an ironclad commitment to non-aggression and preventing harm. Before her untimely death in 2017, Maples had succeeded in forging a seemingly impossible bridge between the worlds of Buddhism and law enforcement elegantly composed in the practice poem or gatha she presented to Thich Nhat Hanh at her dharma teacher ordination. May it continue to serve as a restorative model of Right Policing:

This article was created in collaboration with Buddhist Justice Reporter, who describe themselves as a community of BIPOC dharma practitioners engaged in peaceful resistance to white supremacy and violence.

Dexter Cohen Bohn is a British/American social activist and Communications Coordinator at the International Network of Engaged Buddhists (INEB) based in Bangkok, Thailand.