When Sarah Chauncey drops the label “cat,” she sees her pet clearly for the very first time. 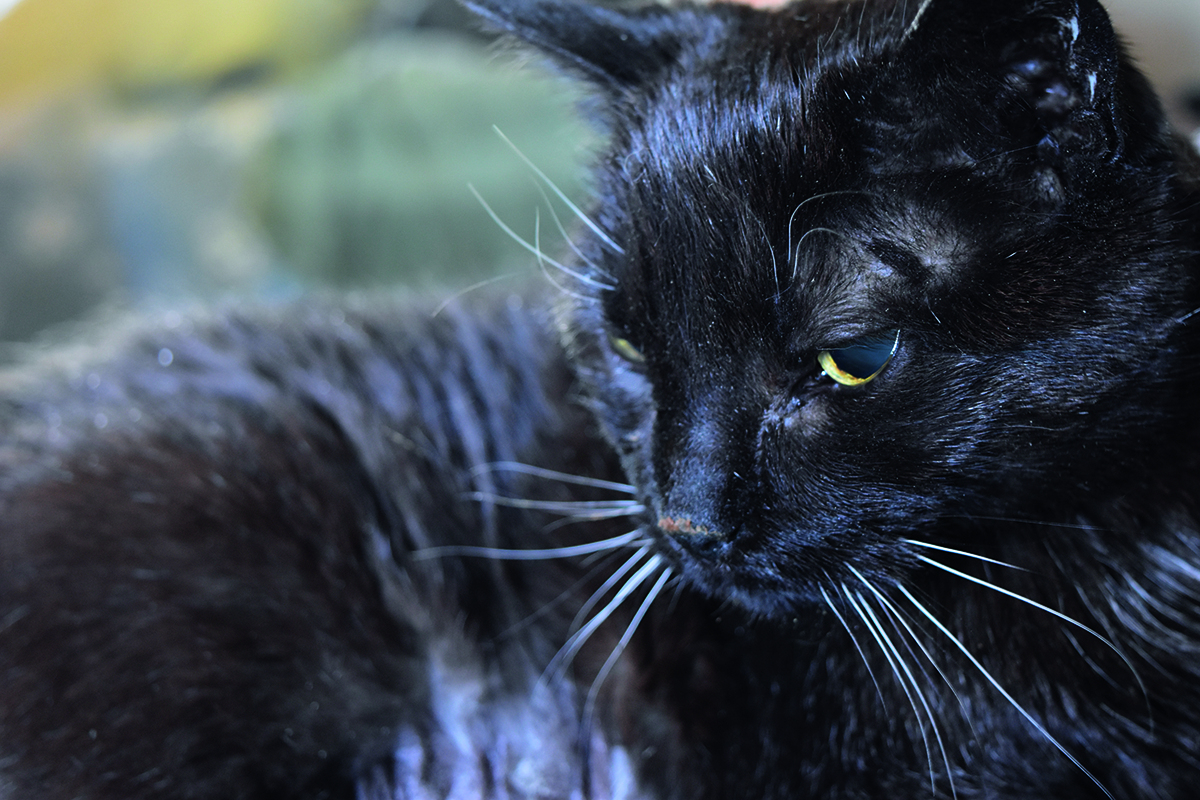 Hedda. Photo courtesy of the author.

As a child, I would repeat certain words over and over again—piano, nine—until the words lost all meaning and became simply a sequence of sounds. I’d stare at my hand for so long that it no longer appeared to be “mine,” or even a hand. It was a fascinating object. I’d lie on the lawn and look up at the sky, and I’d wonder whether the color I called blue was the same color my friend David saw when he used that word to describe the same patch of sky.

Many of us have these childhood experiences, yet in adulthood, we write them off as childish ignorance. Animals bring that wonder back into our lives.

The animals who live with us are privy to our deepest secrets and most private moments — the parts of ourselves we wouldn’t dare show another human.

When in 2010 I went off half a lifetime of antidepressants, I listened to multiple teachers—Eckhart Tolle, Tara Brach, Pema Chödrön—not because I wanted to be “more spiritual,” but because I was afraid I’d kill myself if I didn’t find some inner peace. I began meditating and practiced observing my inner and outer world—thoughts, feelings, and objects—without allowing my mind to impose labels.

As an exercise, I looked at my cat Hedda, and removed the label “cat” or anything I thought I knew about her. As with my hand when I was a child, I looked at her without concepts. I saw her clearly for the first time—a life form that had nothing to do with the stories humans (including me) had created around her. An occupant of this planet with her own purpose and agency.

I marveled at this being staring back at me.

Just as “the finger pointing to the moon is not the moon” (meaning the teachings are pointers to truth, not truth itself), so too the labels that humans have invented to categorize the world are not those things. Absent human interpretation, who and what are these beings we share our lives with? What is this bond? That is the mystery at the core of the relationship. And it’s precisely because we can’t define it, can’t talk about it endlessly, that the bond is so powerful.

An amazing thing happens when we look at animals, or even trees, without naming them, without projecting onto them the mental constructs we’ve been conditioned to believe in. A great mystery opens—the mystery of life on this planet, of our relationships and connections.

It’s really hard to do that with people, because people invariably open their mouths to speak and because we have expectations of how humans should behave. The closest we come is with babies, the dying, and partners. In the awe of certain moments—birth, death, sexual ecstasy—we understand that language is insufficient. And then we forget that.

The goal of language is for us to understand one another, yet how often does that work? We humans spend millions of words trying to get others to understand us, because if you can understand me, then maybe—just maybe—you’ll truly see me and accept me. Isn’t that the universal desire?

We all long to be seen, but when humans look at each other, more often than not, there are mental constructs and conditioning that prevent us from truly seeing the other person. When a person speaks—especially in distress—we’re quick to offer advice or to try to distract them or convince them that the problem really isn’t that bad.

Animals don’t do that. They soothe us without dismissing our concerns, or telling us to stop crying, or that John really is a jerk and we’re better off without him. They show us that we are essentially loveable and whole, even when we feel our most broken.

Companion animals form attachments to us and show affection, even to those of us whom other humans have shunned. They don’t care about our body shape, income, social status, or professional success (or lack thereof). They accept us for who we are, and often—even for those of us with vibrant social lives—they are the only beings who provide that level of acceptance.

The animals who live with us are privy to our deepest secrets and most private moments—the parts of ourselves we wouldn’t dare show another human. The essence of our relationship with animals is that of fellow occupants of this planet, witnessing each other.

Dogs have been bred to express themselves in ways that humans can understand. Their facial expressions are more exaggerated, and their extroverted nature makes them easier to read. But cats—despite their reputation and fewer facial muscles—are equally expressive. It’s just a matter of learning their communication style.

So many of us go through life carrying shame and self-doubt—and often, these become wedges in our romantic or personal relationships. Yet animals love us anyway, wholly and unconditionally. Animals teach us (if we let them) what it truly means to love—and be loved.

As anyone who has lived with a cat or dog can tell you, animals are far more forgiving than people. Hedda would fight tooth and claw against being given a pill, with looks and sounds of outrage that even a human could understand, yet only a few minutes later, she’d be curled up next to me, purring. Animals don’t cling to resentment, despite a memory capacity to do so.

Animals teach us acceptance, too. We accept behavior from them that we’d never tolerate from another human. The cat knocked a plant off the counter? That’s just what cats do. The dog shredded a pillow? Oh well, he’s just a puppy. We accept their quirks because we love them, and we know that jumping onto counters and knocking things off is their nature. Nothing we can do will change that.

Assuming nothing in their life circumstance has conditioned them to live from fear, companion animals love purely and wholly. And in turn, most of us would do anything for our pets—they teach us the ferocity of love. Who are we to say that’s not intelligence of the highest order?

Sarah Chauncey is a nonfiction writer and editor based on Vancouver Island. To help people who are grieving the loss of their cat, she manages P.S. I Love You More Than Tuna on Facebook and Instagram.