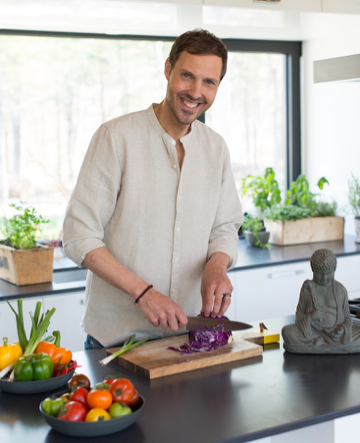 Andrea Miller talks with vegan chef Jean-Philippe Cyr, also known as The Buddhist Chef, about cultivating compassion for everyone — including animals.

French Canadian Jean-Philippe Cyr was a classically-trained chef who specialized in preparing meat. Then he attended and cooked at a meditation retreat and began thinking about how meat consumption requires animals to suffer and die. Soon thereafter, Cyr was asked to cook a lamb banquet for four hundred people at a funeral home, and that was the last straw. He quit his restaurant job and became “The Buddhist Chef,” dedicating himself to teaching people how to prepare easy and tasty vegan fare.

My first introduction to Cyr was stumbling across his cooking segments on YouTube. Think vegan chocolate chip pancakes, Thai red curry ramen, ginger lemonade, and more. Not only did his recipes make my mouth water, I also relished his dry sense of humor and the way he hammed up his French accent. As it happened, I interviewed Cyr on National Vegan Day. —Andrea Miller

Andrea Miller: Why do you feel that eating animal products is at odds with Buddhist practice?

Jean-Philippe Cyr: It’s all about compassion. The Buddha lived a protected life—they didn’t want him to see the suffering behind the walls. That’s a good parallel to make with our society. We don’t realize that animals are suffering behind those walls, but when you present people with the suffering of animals, when you present people—thanks to the Internet—with images of what’s going on in the slaughterhouses, people are not insensitive. Everybody’s against animal cruelty, but they don’t know what’s going on.

What is animal suffering? Is a chicken suffering when it’s confined to a cage? If I put my cat, for example, in a chicken cage I would go to jail. So, it’s all about compassion and, as I learned when I was doing Buddhist meditation retreats, you don’t have to involve animal suffering to have a good diet. It’s not necessary.

Can you tell me about your practice?

I practice Vipassana meditation. Every morning I try to concentrate on my breath. I think that subconsciously something switches in my brain after a long period of meditation. I’ve seen that same change in people when doing retreats. I’ve seen delinquents, kids with problems, who—after a ten-day meditation retreat—you wouldn’t recognize. They were so calm and patient.

It’s all about compassion.

I try to live according to the values of Buddhism, which is trying not to create suffering in any way as much as possible. We have to have compassion, even for hunters, because you’re not going to change mentalities by dualism, by thinking “Me against them. We’re good, they’re bad.” I used to eat meat a lot, so I try not to judge people. I try to practice metta for animals and everybody.

Would you say that cooking is a spiritual practice for you? 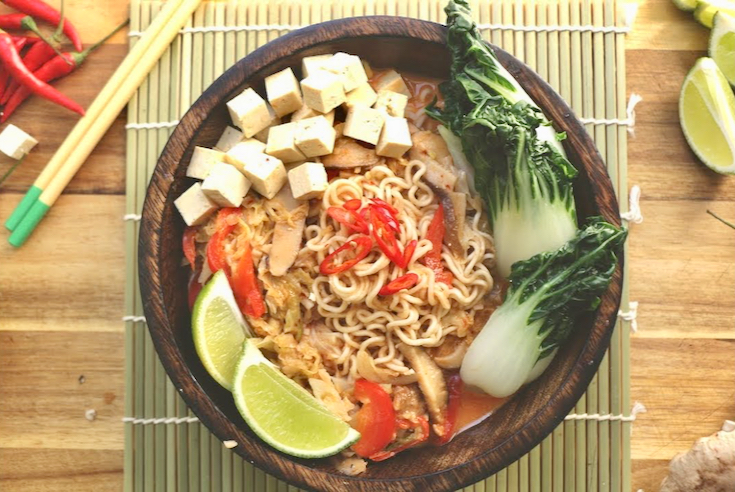 Is eating also a spiritual practice for you?

Sure. When you’re on a retreat and you don’t eat from noon to the next morning that’s a very good practice. To feel what it’s like to be hungry makes you realize that food is important. You have to respect food and be grateful for the food you have. We’re not mindful about food anymore. People stay at McDonald’s for not even ten minutes.

Why do you focus so much on teaching people how to cook vegan food?

Everybody wants to reduce their meat consumption, but people don’t know where to start. They think that if they remove meat, they’ll end up with potatoes and carrots on their plate. You have to educate people on how to cook contemporary vegan food. In the seventies, there was a lot of legumes—it was very dry.

Some people write to me and say, “Oh, I’ve reduced my meat consumption. Yesterday we had a smaller piece of chicken.” That’s crazy when you think about it as a vegan, but for the general population every step in the right direction is a good step. Everybody has a reason to eat less meat, sometimes it’s health, sometimes it’s the environment. What drives me is animal suffering. But there’s no bad reason to become vegan.

What are your all-time favorite ingredients?

I really like tofu. It’s pretty bland, like chicken, so you can swap it for chicken or ground beef. For seasoning, I really like a miso paste because it’s salty and fermented. I use a lot of fermented foods like soy sauce and miso paste because when you try to cook vegan food sometimes there’s a depth of flavor that’s lacking. And maybe because I’m Canadian, I always put a little drop of maple syrup in my recipes to give them a little something. Sometimes we wonder what’s missing in a recipe, and we add more salt, spice, and everything, but sometimes it’s just a balance of acidity, and a little teaspoon of maple syrup here and there helps. These are all tricks that I learned in restaurants.

My mom was a very good cook and a feminist. “You’re not going to depend on a woman,” she said.

What will you have for dinner tonight?

Tofu with spicy peanut sauce. Five ingredients: peanut butter, soy sauce, maple syrup, sriracha sauce, and tofu. You have your basic flavors—spicy, sweet, salty, and acidic. And peanut butter is one of the best sources of protein you can find. I think it’s two dollars per portion, not even. And it’s a crowd pleaser. It takes five minutes to put together, literally.

The first picture I have of me cooking is the first picture that my mother ever took of me. I was three or four years old and was standing on the countertop mixing a cake. My mom was a very good cook and a feminist. “You’re not going to depend on a woman,” she said. “You’re not going to make a woman cook for you.” She made my father know he was the one doing the dishes right off the bat, and it was important for her that I cook. When you know how to cook, you can save money and be independent. And my mother loved to cook. I remember her closing her eyes when she was tasting something and really enjoying it. For some people, eating is just to survive, but for some it’s really the center of the day. 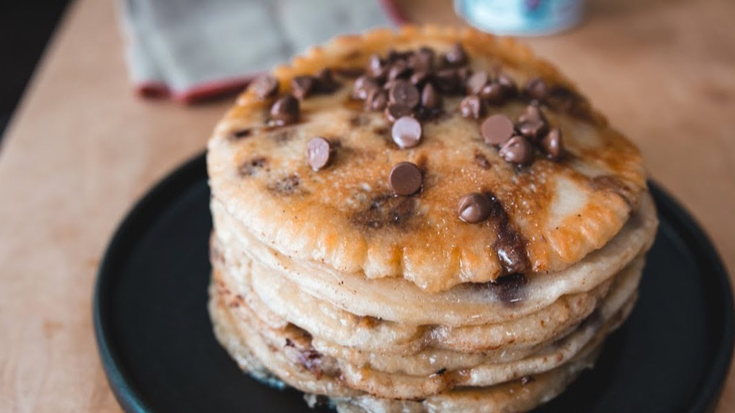 What was it like cooking at the retreat center?

In teaching people, I’ve learned a lot about compassion. In a meditation center, you have to be aware of where you are and why people are there. If you have a temper, it’s not the right place. In a meditation center, it’s really about working together and being a team. You learn a lot about yourself too. That’s actually where I tested the recipes for my first books. They couldn’t complain because it was a silent retreat, but just looking at the plates, I could tell that they liked it. Some people would specifically sign up for retreat when I was there, even though it’s very non-Buddhist to be picky about who’s going to cook!

There is a stereotype of chefs being hot-tempered. Is there really a lot of screaming in professional kitchens?

No, you don’t see an angry chef anymore. There are so many jobs for young people nowadays, they’re just going to leave. You don’t get the best of people by screaming at them. It’s not efficient. I think this culture of violence in the kitchen is over now. I’m confident that people are changing in a good way in our society in general.